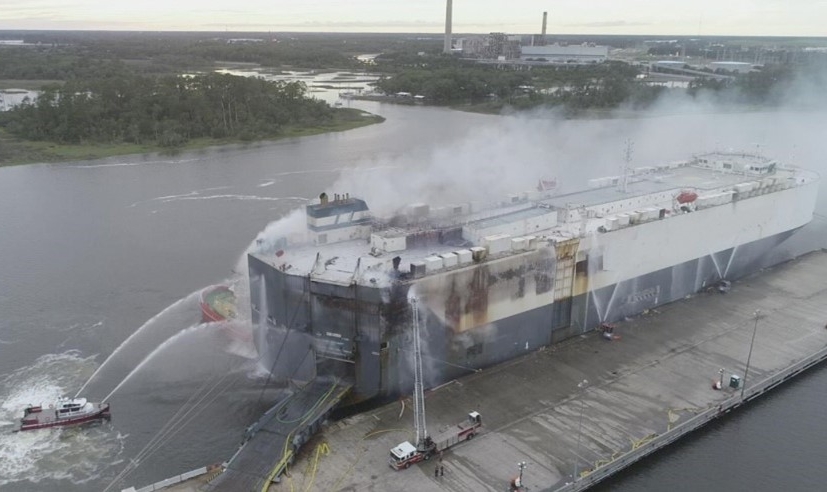 Procedures should not only describe the hazards, but also provide the process to mitigate them. The Nautical Institute gives this warning in its latest Mars Report in which it describes how the car carrier Höegh Xiamen was lost as a result of fire. In this case, several layers of the safety regime failed.

The Nautical Institute gathers reports of maritime accidents and near-misses. It then publishes these so-called Mars Reports (anonymously) to prevent other accidents from happening. This Mars Report is based on a report by the National Transportation Safety Board (NTSB, USA) so in this case, we know the vessel involved: the Höegh Xiamen. The fire on board this car carrier occurred on 4 June, 2020. A summary of this incident:

The crew of the car carrier Höegh Xiamen were preparing for departure, having spent two days loading cars. There were 2420 used vehicles on board. While the crew were securing vehicle ramps, the chief mate noticed smoke coming from a ventilation housing for one of the exhaust trunks. Upon further investigation, crew members discovered a fire on deck 8, which was one of those that had been loaded with used vehicles.

The crew attempted to fight the fire, but were repelled by heavy smoke. Shoreside fire department teams soon arrived and relieved the crew. The master consulted with the fire department, and with their agreement had CO2 from the vessel’s fixed fire-extinguishing system released into decks 7 and 8. The crew were then evacuated.

The CO2 was ineffective for a number of reasons; not least that the dampers for decks 7/8 were ineffective or not adequately secured. This gave the fire continued access to oxygen, negating the effectiveness of the CO2. The fire continued to spread to higher decks and the accommodation.

The car carrier and its cargo of used vehicles were declared a total loss, an amount estimated at USD 40 million.

Mars Report editor’s note: This is an interesting report with more lessons learned than can be enumerated in this short Mars format. Readers are invited to read the report in its entirety, available online at the NTSB webpage.