Niestern Sander to repair mv Helge that was damaged in collision 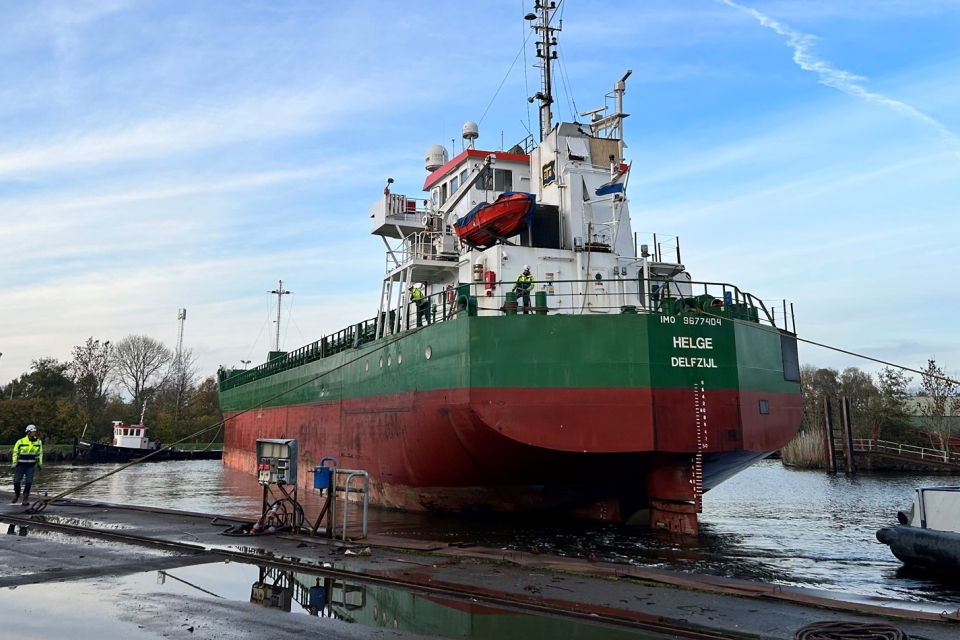 Last week, the mv Helge arrived at the repair yard of Royal Niestern Sander in Delfzijl. Here, the general cargo vessel, managed by MF Shipping in Delfzijl, will be repaired over the coming months. Following a collision with another vessel off Denmark, the ship sustained serious (water) damage.

After a damage repair tender process, Niestern Sander was awarded the repair contract and subcontracted the towing of the Helge from Esbjerg to Delfzijl to Wagenborg Towage. The tug Eems Wrestler of Amasus Shipping in Delfzijl was hired to tow the vessel to its homeport for repairs. All in all a unique combination of work involving four maritime companies situated in Delfzijl in the North of the Netherlands.

The scope of the repair project at the Niestern Sander shipyard will comprise of among others:

All in all, a major repair job that started immediately after the ship arrived on 15 November. Depending on the delivery times of various installations and components, the Helge is expected to be ready again around the summer of 2023.

On 9 September, the Helge collided with the Wild Cosmos in the North Sea 20 nautical miles west of Ringkøbing, Denmark. The collision occurred in heavy weather.

The 89-metre coaster Helge, which sails under the Dutch flag, was built in 2013. The vessel suffered significant damage in the collision and was taking on water. The vessel was on its way from Antwerp in Belgium to Porsgrunn in Norway. The Wild Cosmos, a 149.92-metre reefer built in 1998 sailing under the flag of the Bahamas, could continue its journey after the incident.

The Helge was taking on water and the seven crew had to evacuate the vessel in a liferaft. Afterwards, the Danish navy rescued them by helicopter. The Helge was left listing and the Danish Home Guard was called in to salvage the vessel before it could sink. Together with a tugboat of Svitzer and after a team of salvage experts was placed on the Helge by helicopter, a tow was established and the vessel was towed to the port of Esbjerg.