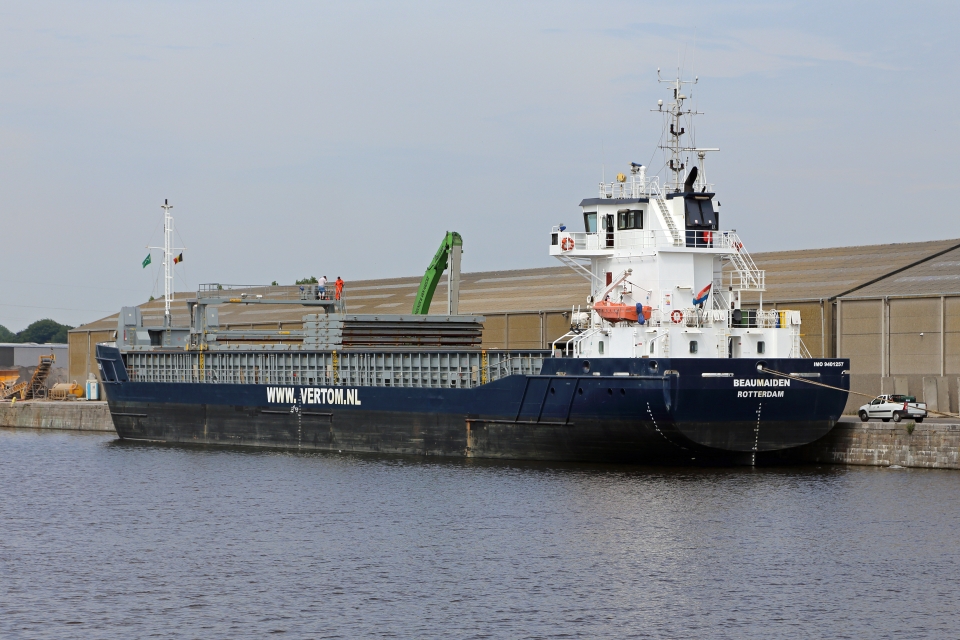 The Maritime Disciplinary Court of the Netherlands has suspended the licence of the former captain of the Beaumaiden for two years. This vessel grounded in October 2021, after the captain had consumed alcohol and left the bridge unattended for four hours.

On Monday 18 October 2021, at around 3:27 am LT, the ship Beaumaiden grounded near the Danish island of Bornholm. This grounding was reported by the shipping company, Vertom, to the Dutch Human Environment and Transport Inspectorate (ILT) on the same day. The vessel was fully loaded with fertiliser and had a maximum draught of 5.50 m.

The Beaumaiden (IMO number 9401257) is a Dutch general cargo ship, owned by Valparola Beaumaiden BV and managed by Vertom. Built in 2008, the vessel is 88.6 metres long and 12.5 metres wide and it has a carrying capacity of 3800 tonnes. At the time of the accident, the crew comprised a total of seven people.

Around 23:40, he went to the toilet in his cabin. He then lay down on his bed and fell asleep. He did not call the 3rd mate to wake him for his watch from 00:00 to 4:00. The ship sailed for about four hours with an unmanned bridge, on autopilot, before running aground off Bornholm, at ten knots.

In addition to drinking alcohol and not appointing a lookout, he had turned off the Bridge Navigational Watch Alarm System (BNWAS) as he found it ‘annoying to press a button every few minutes’. He had already left the bridge unattended during his watch at least twice before going to bed. Furthermore, he was making phone calls during his watch and playing loud music, which prevented him from properly listening to VHF channel 16. Finally, the captain also incorrectly filled in the work and rest hour lists of the lookouts.

Also read: Skipper arrested for alcohol use after collision on Meuse river

The Maritime Disciplinary Court of the Netherlands (Tuchtcollege voor de Scheepvaart) finds that the person concerned has committed a most serious breach of his responsibilities as officer of the watch and his duties as master, resulting in grounding. Through his extremely reprehensible conduct while the vessel was in busy waters, he put his crew, the vessel, the cargo, shipping traffic and the environment at great risk.

Drunkenness by the captain during his watch, in violation of the law and the rules of the shipping company, prior to the grounding meant that he failed to fulfil his duties and responsibilities as officer of the watch, if at all, with a grounding as a result. The court faults the accused that as captain, he should have set a good example to the crew.

Given the seriousness of the behaviour found, the Maritime Disciplinary Court of the Netherlands has imposed the maximum two-year suspension of his licence. The captain had already been relieved of his duties by his employer and possibly also faces prosecution in Denmark.

It is not the first time this former captain faced the Maritime Disciplinary Court. In March 2019, he was captain of the Dutch freighter Alana Evita. Together with part of the crew, he left the ship by lifeboat/MOB boat and went to the mainland (Barry, UK). While attempting to return to the ship, they got lost and were eventually found following a UK Coast Guard search and rescue operation.

Because this crew left the ship, the ship was undermanned and there was no one left on board with officer of the watch (OOW) qualifications. This resulted in his licence being suspended for eight weeks, four of which were conditional. The second transgression occurred while still on probation of the previous offence.

Recommendations of the court

As an extension, but also independently of the decision in this case, the Maritie Disciplinary Court sees cause to make the following recommendations: