In pictures: Naming of Viking polar expedition ships in Amsterdam 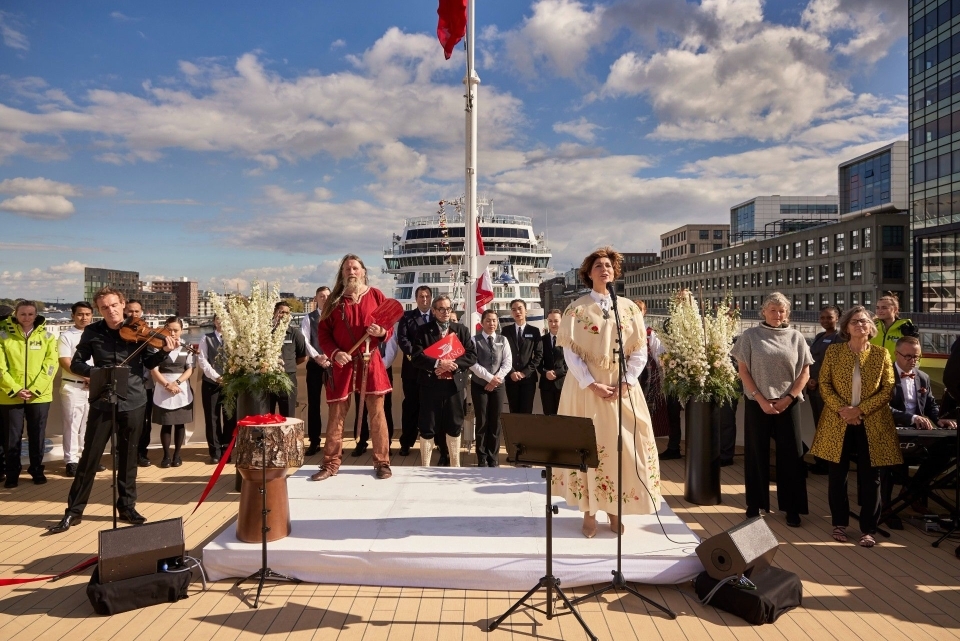 In a grand ceremony on board the Viking Polaris moored in central Amsterdam, two famous female polar explorers christened both this novel explorer cruise ship and its sister ship Viking Octantis on 30 September. At the same time, Viking also celebrated its 25th anniversary. Despite the fact that in Amsterdam political circles, the importance of the city as a cruise port is not always appreciated, this event shows that the cruise world itself does hold Amsterdam in high regard as a cruise hub.

Amsterdam is popular thanks to the presence of the – up until Covid – perfectly functioning Schiphol airport, which is why Viking chooses to celebrate such an event as its 25th anniversary with the christening of three ships in Amsterdam.

To celebrate Viking’s 25th anniversary, all invited international guests sailed on board three different types of Viking cruise ships in convoy to IJmuiden. The novel Viking explorer class ships serve a short winter period in the South Atlantic. They operate in the Great Lakes in the northern summer period. When the shipyard was working on the design, the beam of this new generation of Viking cruise ships was adapted to pass through Great Lakes locks.

The Viking Polaris was named during a grand Nordic style ceremony on the ship’s forecastle deck by its ceremonial godmother Ann Bancroft. She is one of the world’s most famous polar explorers. Her equally famous colleague Liv Arnesen named the Viking Octantis and offered her blessing remotely via video to the sister expedition ship, which was then already sailing its inaugural season in the Great Lakes.

The new Viking class of polar cruise ships is purpose built for expeditions and hosts only 378 guests. The sister ships are ice-strengthened Polar Class 6 vessels with a long hull, straight bow. For accurate and independent manoeuvring in icy waters, they operate dynamic positioning systems.

For passenger comfort in remote regions they are fitted with both fin stabilisers and U-tanks. The ships are built to DNV Silent-E Class Notation for low underwater noise and fly the Norwegian Flag. The hulls were built in Tulcea, Romania. Outfitting, commissioning and testing was completed at Vard shipyard in Søviknes, Norway.

Unique exploration equipment are two precious six-passenger yellow submarines rated to 300 metres water depth. Fitted with swivel seats and spherical windows, the two passenger compartments in each submarine offer an undistorted view in all directions for every guest.

Viking Expeditions employs its own expedition management and education staff and also operates an onboard science laboratory in collaboration with renowned environmental research institutes.

The Viking Mani is a longboat type built by Neptun Werft, Germany, for Viking River Cruises, which operates a large series of 61 identical sister ships from Basel headquarters. Cruises are offered on the many inland rivers and canals in continental Europe where the ships’ beam, water depth and air draught restrictions allow their sailing.

Their long length of 135 metres enables this fleet of Swiss flagged ships to carry 190 passengers in 95 staterooms to all inland cruise destinations of interest. Viking River Cruises is also expanding its cruise offering to other continents. Their owned or chartered inland cruise ships now sail in China, Vietnam, Russia, Egypt and the USA.

The Viking Mars is a mid-size ocean cruise ship type. The Fincantieri yard in Ancona, Italy, delivered the ship in 2022 to the Viking Ocean Cruises division. Seven identical ocean cruise ships are now in operation, all 227 metres long and 47,842 GT. Four more are under construction and another four have already been ordered from Fincantieri for delivery up to 2028.

Viking Ocean’s itineraries feature travel in Northern Europe, the Baltic, the Americas, the Caribbean, the Mediterranean, Asia, Australia and New Zealand. These ships spend more time in port than is common at other ocean lines, emphasising a focus on the culture of their destinations. The Viking Ocean Cruises identical sister vessels carry up to 930 passengers and 550 crew.

During the Amsterdam port call, a selected number of invited guests, including this SWZ|Maritime reporter, were toured across all three Viking ships on display. Viking fielded their best tour guide, the renowned Los Angeles-based designer Richard Riveire. As their chief interior architect, he is exclusively overseeing all Viking newbuildings. He has developed a trademark Scandinavian influenced, modernist streamlined interior design with understated elegance, which is maintained as a house style throughout all Viking ships.

‘Our guests are made to feel at home instantly when entering a Viking ship,’ says Richard, ‘through the common use of the same interior elements. Furnishings, panels, colour schemes, carpets, even bar layouts and cabin amenities are the same on all ships.’

During the three ship tours, he tirelessly explains the philosophy of his design process and points at his five common elements for Viking ships interiors: Nordic heritage, residential modernism, craft idea, nature, and exploring the world in comfort.

‘Every day you discover a new culture on board a cruise. That makes a suitable interior design difficult.’ He has opted for a timeless, traditional and fresh design. Richard has found historical and theme inspiration by researching numerous musea abroad. Norse mythology, ancient exploration history and nautical elements he studied at the Viking Ship Museum in Oslo. His attention to detail: Even the carpets inside the ship’s passenger elevators are designed in style with the ship’s interior theme.

Legend has it that Viking cruises started 25 years ago in 1997 when Viking founders Torstein Hagen and Ulrich Bauer set off from Schiphol airport armed with only two mobile phones to buy four Russian river cruise ships. The Viking organisation and fleet experienced a phenomenal worldwide growth ever since. Reason enough for Viking to select Amsterdam as port for its 2022 jubilee celebrations.

Despite setbacks during the global pandemic the company nowadays operates 101 ships, with some 10,000 staff. Plans are afoot for further fleet operations expansion with newbuilding programs running in parallel at three selected European yards in Norway, Germany and Italy. Guests from all over the world were hosted on board the three new Viking cruise ships sailing in a special convoy along the Noordzeekanaal to IJmuiden.

The novel explorer class ships serve a short winter period (the Austral summer) of just over two months in the South Atlantic and have to find other employment in the cruise market for the remainder of the year. Viking has developed the Great Lakes cruise service for Northern summer periods. And now also offers Longitudinal World Cruises ranging between Antarctica and the Great Lakes along the coasts of Southern, Central and Northern America.

Whilst Viking Polaris and Viking Octantis were already contracted to Vard shipyard, a Fincantieri subsidiary in Norway, the beam of this new generation of Viking polar explorer ships had to be narrowed. This to ensure that they could also pass through the notoriously narrow Welland locks in North America’s Great Lakes.

Rune Rødset, SVP Sales & marketing at Vard Group: ‘As a yard you always have to work flexibly with your client, to meet his market requirements in a new design. In this case, Vard Design also took the opportunity to further optimise the hull shape of this new breed of multi-operable ships for ice-class bow, sailing speed (Antarctic cruising) and fuel economy.’

With plans afoot for major expansion of its already impressive fleet of cruise ships, chairman Hagen delivers his views on future fuels in his Viking jubilee speech for a large audience gathered in the Aula, a panoramic auditorium spanning the full aft ship of the Viking Polaris. First, he explains that the current Viking fleet already focuses on the environment in river and ocean operations.

As to new fuels, he maintains his strong view that there is no future for LNG, stating ‘LNG is the worst cruise ship fuel for greenhouse gas emissions.’ Instead, plans are under development to fit one of the future Ocean class newbuildings with hybrid propulsion based on liquid hydrogen and fuel cells. This future generation of Ocean ships (11 metres longer than the present series) would then be able to operate at zero emissions in Norwegian fjords.

Amsterdam will remain a major port of call for Viking cruise ships. Both for ocean cruises and inland river cruises. It is ideally located as a passenger transfer hub for those who want to continue their journey on another type of Viking cruise ship. But for the port of Amsterdam, operations governing air emission restrictions and alternative bunkering facilities are already on the cards.

The SWZ reporter on board the Viking Polaris asks about Viking’s plans for adapting to the mandatory electrical shore power connection for cruise ships. Chairman Hagen replies: ‘We are a science-based company. We are preparing ourselves, and we will be ready for the future.’