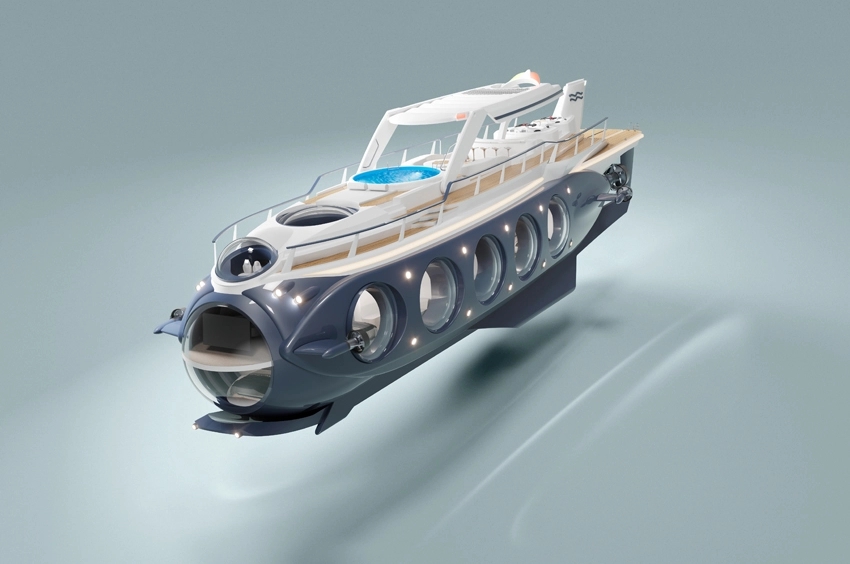 Dutch U-Boat Worx has revealed the design of a 1250-tonne, 37.5-metre yacht submarine, the Nautilus. The underwater superyacht could be built within thirty months and comes with a price tag of EU 25 million.

Since Jules Verne’s 20,000 Leagues Under the Sea came out in 1870, people have been dreaming of a luxury yacht with dive capabilities. Since then, inventors produced a lot of impressive concepts. Unfortunately, not one of these designs has ever been realised.

U-Boat Worx designs and builds small submersibles, and says it has now finally succeeded in engineering a realistic combination of luxury and safety in a fully certified private submersible.

The diesel-electric Nautilus has a depth rating of 200 metres, with a surface cruise speed of 9 knots and an underwater speed of 4 knots. Once ordered, the company can deliver a Nautilus within thirty months.

When functioning as a boat, the Nautilus offers a massive sundeck equipped with a freshwater pool, a bar, and a luxurious dining table. This al fresco arrangement is retracted before the submersible slips below sea level.

The Nautilus interior features a 50-m2 dinner and lounge area with four circular windows. Each with diameters close to 4 metres. The proposed design has a master bedroom and four staterooms, as well as sleeping quarters for up to six crew. The vessel will also be fitted with a fully equipped galley, while the interior layouts are fully customisable.

The superyacht submarine will be able to stay under water for up to four days. At cruise speed, the underwater endurance is six hours. When not in use, the Nautilus can be docked at any quay that can accommodate its 6.5-metre draugh. The Nautilus has a starting price of EUR 25 million.

A newly invented, completely pressure-resistant electrical tender is stowed under the Nautilus’ aft deck and will stay outside while diving. This tender, the Aronnax, may also be used for transporting five scuba divers underwater to the intended dive spot.

‘People that have decided to buy a yacht will now have to consider if their vessel of choice can also dive down to 200 metres,’ says U-Boat Worx Chairman and Founder Bert Houtman. As an added bonus, the Nautilus combats seasickness. Houtman: ‘If the sea becomes too rough, you simply dive and continue your voyage in comfort.’

Also read: Good times for yacht building – What Royal Huisman is up to