How CMT plans to scrap ships without humans involved 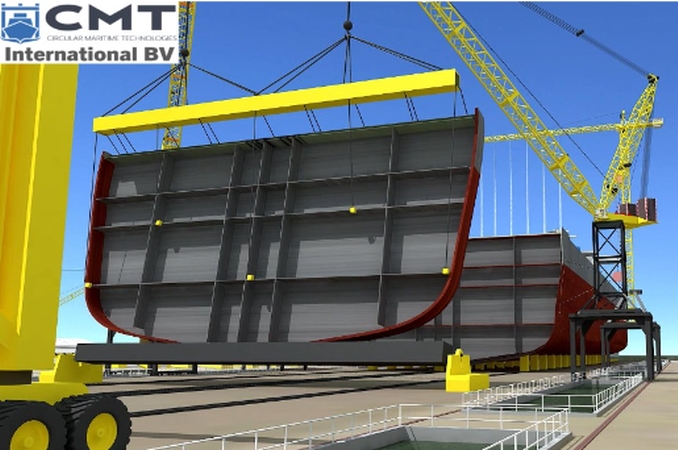 Circular Maritime Technologies (CMT) introduces a revolutionary and future-proof circular process for the shipbreaking industry. At the CMT yard, no humans are put at risk as the ships will be taken out of the water and dismantled by a fully mechanised and automated system.

CMT is born out of the necessity and urgency of providing a solution to the problem of ship scrapping, which continues to pose risks to people’s health and the environment. The company strongly believes that the technology available today offers the opportunity to take humans out of the equation when scrapping a ship.

According to CMT, there has been a standstill on any kind of major developments over the last fifty years in the ship scrapping industry. The solution now developed delivers clean steel thanks to an automated, low carbon, contained and circular process that does not harm humans or the environment.

The main feature of the CMT system is speed of processing, and this is achieved through automation and deployment of robots in dangerous processes. Humans only control all systems and processes that operate from a single control point named the brain. This is the organiser of timing and production.

Also read: How Heerema had its crane god Hermod recycled in China

Reducing the ship to slices and blocks

The solution that CMT has developed is a dedicated facility where ships are being taken out of the water and dismantled by a mechanised and automated system. This is realised by a pre-engineered sequential industrialised set of systems, techniques and methods.

The CMT Diacutron is basically the first stage of the ship dismantling process, reducing the size of the ship without humans being directly involved. The CMT Diacutron cuts the ship into slices and into blocks by the deployment of huge cutting wires, especially developed for this purpose. The cutting is accompanied by huge volumes of water to cool the wire, which is constantly recycled after cleaning.

There are two wires cutting simultaneously. One upper wire cutting from the top to halfway and one from the bottom cutting upwards to halfway. The ship is moved forward on the ship transfer system. A slice of 300 mT is cut free in two hours, a 600 mT slice in four hours.

Once a slice has been cut from the ship, big lifters transport it to CMT’s Beta Unit, which cuts the slice into 36 blocks. Each of these blocks are automatically removed of anything attached to it. Nothing is done by hand.

WATCH A VIDEO ABOUT THE CMT SOLUTION HERE.

The blocks then move on to one of the most sophisticated systems, the automated block processing (ABP). Here, robotic arms work on the blocks that are on the conveyor belt, presenting the blocks to the three stations: stripping (from raw block to dirty primary steel), cleaning (cleaning steel surfaces by hydroblasting) and cutting (laser steel cutting into (small) plates).

CMT has adopted this technology from the production of cars, where this has already been common technology for decades.

Also read: How Boskalis had one of its dredgers scrapped in Mexico

Circularity is the main driver of all CMT systems and facilities. The yard makes use of refurbished, existing equipment. All waste derived from the ships is processed at the yard and converted into electric energy, LNG or H2. The company expects this will result in the yard being able to operate on its own power while also being able to supply power to the grid. It is expected that the waste from ships is converted into max 65 MW per hour.

Special collection systems take care of the oils, dump water and sludges. So there is no waste ending up in the environment. The water used to cool the cutting wires is collected, cleaned and re-used and replenished with rain water.

Proof-of-concept prototype in the Netherlands

The CMT project will soon launch its proof-of-concept prototype in the Netherlands. In a dry dock, ships will be dismantled starting with a small ship. In the course of six months, this is to provide the hard evidence that the system works.

Following an innovative and financially sound business model, CMT will set up yards with international partners and attract business from shipowners by matching the price paid by South Asian competitors.

A CMT yard requires about 250,000 m2 of land and has a ship processing capacity of about 1.4 mm metric tonnes per year. This means between sixty to 100 ships can be handled each year, depending on ship size. It produces about 1.1 mm metric tonnes of steel per year. A 200-metre ship, 11,000 mT lightweight, is completely processed in about ninety hours. People do not participate in any of the ship dismantling processes.

WATCH A VIDEO ABOUT THE CMT SOLUTION HERE.