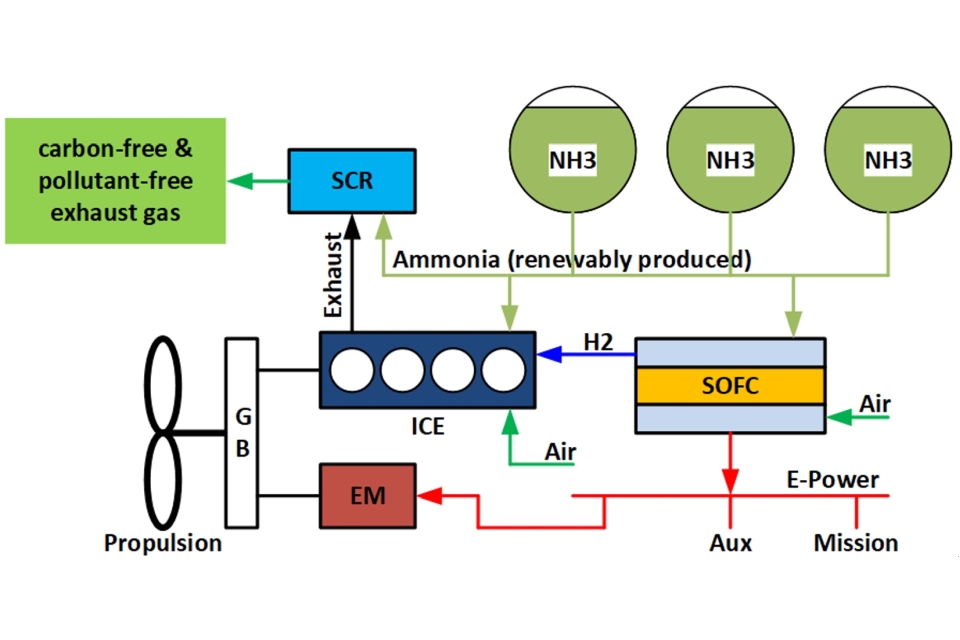 Several news items and short movies have appeared online recently, announcing that the AmmoniaDrive Consortium was awarded a prestigious NWO Perspectief grant. But what is the AmmoniaDrive research project? How does it contribute to combatting shipping-induced climate change? Who are in the consortium and why? And finally, what research activities will take place?

At the NWO Teknowlogy festival on 31 May 2022, all seven new Perspectief research projects, amongst which AmmoniaDrive, were put in the spotlight as key research projects funded by NWO and the Ministry of Economic Affairs and Climate Policy. Nederland Maritiem Land published a news item about AmmoniaDrive winning a Perspectief grant, the Delft University of Technology (TU Delft) announced the winning of the grant on its website and the participating partners have shared the news through their intranet or social media. This article explains what the AmmoniaDrive research project actually entails.

The aim of the funding instrument Perspectief is to make a contribution to the creation of economic opportunities within the societal challenges and key technologies of the Mission-driven Innovation Policy (see the NWO Perspectief website for more information, www.nwo.nl/onderzoeksprogrammas/perspectief). NWO Domain Applied and Engineering Sciences organises an open Perspectief call for new programme ideas annually. A Perspectief round consists of three phases, which for round 2020/2021 meant the following:

The innovative AmmoniaDrive power plant concept uniquely combines solid oxide fuel cell (SOFC) and internal combustion engine (ICE) technology using renewably produced, i.e. “green”, ammonia as fuel. Despite its toxicity, ammonia is considered by many as an effective hydrogen carrier and future fuel for sea-going vessels, mainly because of its promise of being a cost-effective, carbon-free and relatively energy-dense fuel.

However, choosing ammonia as a sustainable shipping fuel does not yet solve the question of how it is used as a fuel, or in other words, how the energy stored in ammonia can be converted into useful (mechanical or electric) power on board of ships.

Engine manufacturers are currently developing diesel-ammonia dual-fuel marine ICEs as a solution to this question. The fuel cell community is at the same time advocating ammonia-fuelled fuel cells (FCs). By combining these two technologies, the AmmoniaDrive power plant has the potential to optimally use the strengths of both energy converters, SOFC and ICE, while utilising ammonia effectively as both hydrogen and energy carrier.

At the same time, the AmmoniaDrive power plant is expected to have a relatively small and thus acceptable impact on ship design; at least when compared to the impact hydrogen-based or battery power plants would have. AmmoniaDrive, therefore, is a single-fuel, high-efficiency power plant that could actually fit on board of ships and that has no pollutant emissions anywhere in the carbon-free energy chain (well-to-wake).

The AmmoniaDrive research programme consists of five Work Packages (WPs). The figure below provides an overview of the programme and the content of its WPs. Governance of the project lies with the Maritime & Transport Technology department of TU Delft, with Prof. Dr R.R. Negenborn as programme leader.

WP1 focuses on the experimental and numerical research into the main AmmoniaDrive system components: the SOFC and ICE. The function of the onboard SOFC-ICE power plant is to deliver useful power. WP1 aims to prove that the SOFC-ICE system can actually fulfill this function. WP1 leader is Dr Ir L.M.T. Somers of the Eindhoven University of Technology. Experimental and numerical research that will take place as part of WP1 addresses the performance of the ammonia-fuelled SOFC and ammonia-hydrogen fuelled ICE. Experiments to characterise combustion behaviour and engine performance will take place on different ICE facilities of research partners in the project.

WP2 focuses on the integrated system performance under various operating conditions using different automatic control and decision support strategies, while the anticipated sensor data is also applied for formulating dynamic maintenance strategies. WP2 leader is Prof. Dr Ir T. Tinga of the University of Twente, analytical and numerical research will be carried out under his and Prof. Dr Negenborn’s supervision.

WP3 focuses on the very important ecological and safety aspects of AmmoniaDrive, including toxicity of NH3. WP3 leader is Dr E. Foekema of Wageningen University & Research. Part of this WP is the development of a safety framework based on experience in other sectors and fundamental safety sciences, while another part will experimentally study the ecological effects of an ammonia spill.

WP4 focuses on techno-economic aspects of NH3 shipping in general and AmmoniaDrive ships in particular. WP4 leader is Prof. Dr B. van der Zwaan of University of Amsterdam. The AmmoniaDrive power plant is based on relatively immature technology and ammonia as a renewable, synthetic e-fuel. Both features contain a lot of uncertainty with regards to their economic viability. The researchers in WP4 will therefore try to find out, using learning curve analysis, what is needed to make the AmmoniaDrive power plant economically viable within a certain time frame.

Finally, WP5 integrates all information generated in the other WPs, aims to develop a (partly virtual) system demonstrator and researches a variety of ship integration aspects through post-doctoral research and (post-)MSc R&D activities at the companies of the consortium. WP5 leader is Dr Ir P. de Vos of TU Delft. Based on use case analyses, ship integration aspects will be researched for different ship types by developing concept and basic ship designs, thus quantifying the impact the AmmoniaDrive power plant will have on different ship types and developing novel design guidelines for naval architects.

Next to the researchers mentioned in the table, the intention is to have a large number of graduation students researching for example ship integration aspects of the AmmoniaDrive concept in collaboration with the companies that are part of the consortium.

‘It is 2050. The mainstream media announce that the 1000th AmmoniaDrive ship has begun its maiden voyage. This important milestone is celebrated by the AmmoniaDrive initiators. The ship was designed in the Netherlands, like most of the AmmoniaDrive ships before it, and built at a shipyard in Africa. Now it has arrived at the North Sea-based “Clean Energy” island, where green ammonia is produced from air and water. Renewable electric power from nearby offshore wind turbines and solar panels is used to obtain nitrogen and hydrogen from air and water. Here, the ship will bunker locally produced green ammonia, after which it will sail to the next port of call for loading its first cargo. While the ship is refuelling, a number of specialists from different Dutch firms, all with their own specialty with regards to AmmoniaDrive power plants, enter the ship to visually check the engine room. No irregularities are expected, as the data from the different sensors on board were already transmitted automatically to the AmmoniaDrive Systems and Control Centre in Amsterdam during the voyage to the Netherlands and no signs of issues or malfunctions were reported. Still, the visit provides additional certainty that everything is indeed as it should be and shipowners around the world have frequently expressed their appreciation of the care, quality and innovativeness of the Dutch maritime community exemplified by these visits.’

This vision demonstrates how the AmmoniaDrive research can be the start of new economic activities for the Dutch maritime industry. The societal impact of AmmoniaDrive is therefore defined as: In a world where ammonia is embraced as a safe and affordable fuel for ships and other applications with no greenhouse gas or other harmful emissions, (engineering) professionals and society in general know the AmmoniaDrive power plant to be the best technical solution for powering ships, as well as other heavy-duty applications, such as island/emergency generators.

Shortly, the consortium hypothesises that the combined SOFC-ICE AmmoniaDrive power plant is ammonia as a marine fuel “done right” and will undertake the necessary research to test this hypothesis.

This research is supported by the Perspectief project “AmmoniaDrive” (project 14267/P20-18) of the Netherlands Organization for Scientific Research (NWO), domain Applied and Engineering Sciences (TTW).