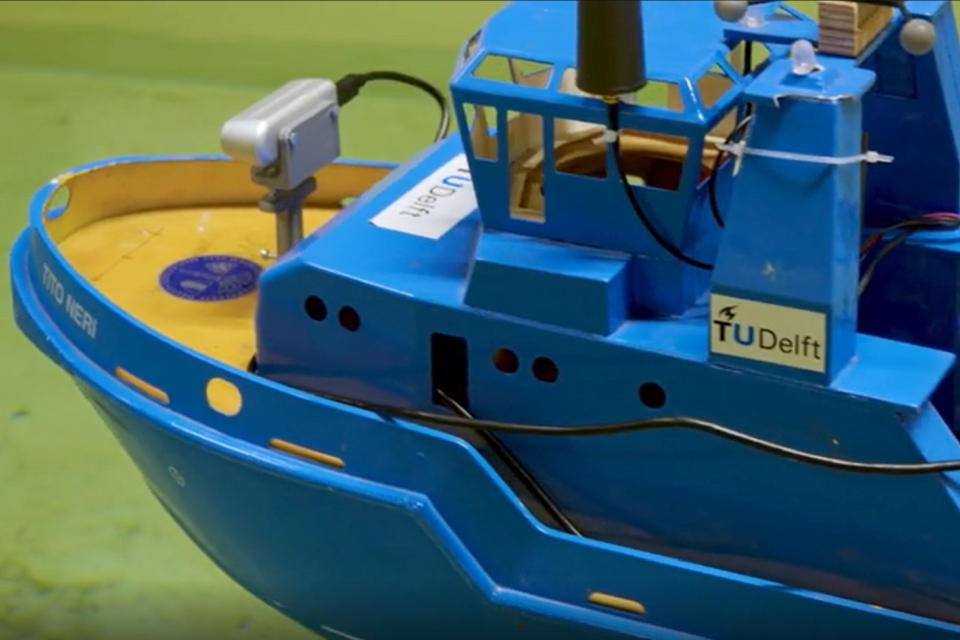 ‘The world is dependent on enormous ships for transport and offshore operations,’ says project-leader and professor of Multi-Machine Operations and Logistics, Negenborn, ‘and these are hugely polluting because they run on diesel and other fossil fuels. If you add all these emissions together, the amount of pollution is comparable to that of a large country like Germany. So AmmoniaDrive is focussed on bringing these polluting emissions down to zero in order to achieve a fully carbon-free production and consumption chain.’

Ammonia has a relatively large energy density compared to green hydrogen, which means you can store a lot of energy in a much smaller volume.

‘This makes it very attractive as a sustainable alternative fuel,’ explains Peter de Vos, researcher and instigator of this whole project. ‘What’s innovative about AmmoniaDrive is, firstly, using ammonia as a fuel, and secondly combining a high temperature fuel cell with an internal combustion engine. The idea is to feed ammonia into one end of the fuel cell, producing electricity and hydrogen at the other end. The hydrogen is used as a promoter fuel in the internal combustion engine to deal with the challenging combustion properties of ammonia.’

AmmoniaDrive is a consortium of six universities, three research institutes and twelve industrial partners, which will spend the next five-years investigating how to use ammonia as an affordable, safe and energy-efficient fuel to make transport by ships and large trucks a lot cleaner and more sustainable.

The project is to result in many scientific insights and technological concepts. During the project, industrial parties will examine how they can immediately incorporate these in their products and services.

‘We are incredibly proud and extremely pleased to have been awarded the Perspectief grant,’ says de Vos, ‘and it is my personal hope that we’ll already be seeing the 1000th AmmoniaDrive ship starting its maiden voyage from the Netherlands by 2050.’

Innovation that has an economic and social impact often requires a large-scale approach. That is why NWO’s Perspectief grant stimulates the setting up of new research lines, the transcending of old networks and the creation of close cooperation between scientists and industry, in order to solve innovation bottlenecks in a multidisciplinary approach.

NWO contributes a minimum of EUR 1.5 million and a maximum of EUR 4 million per successful Perspectief programme. The total budget is 22 million euros. Every year, the NWO Division of Applied and Technical Sciences organises a call for new programme ideas.