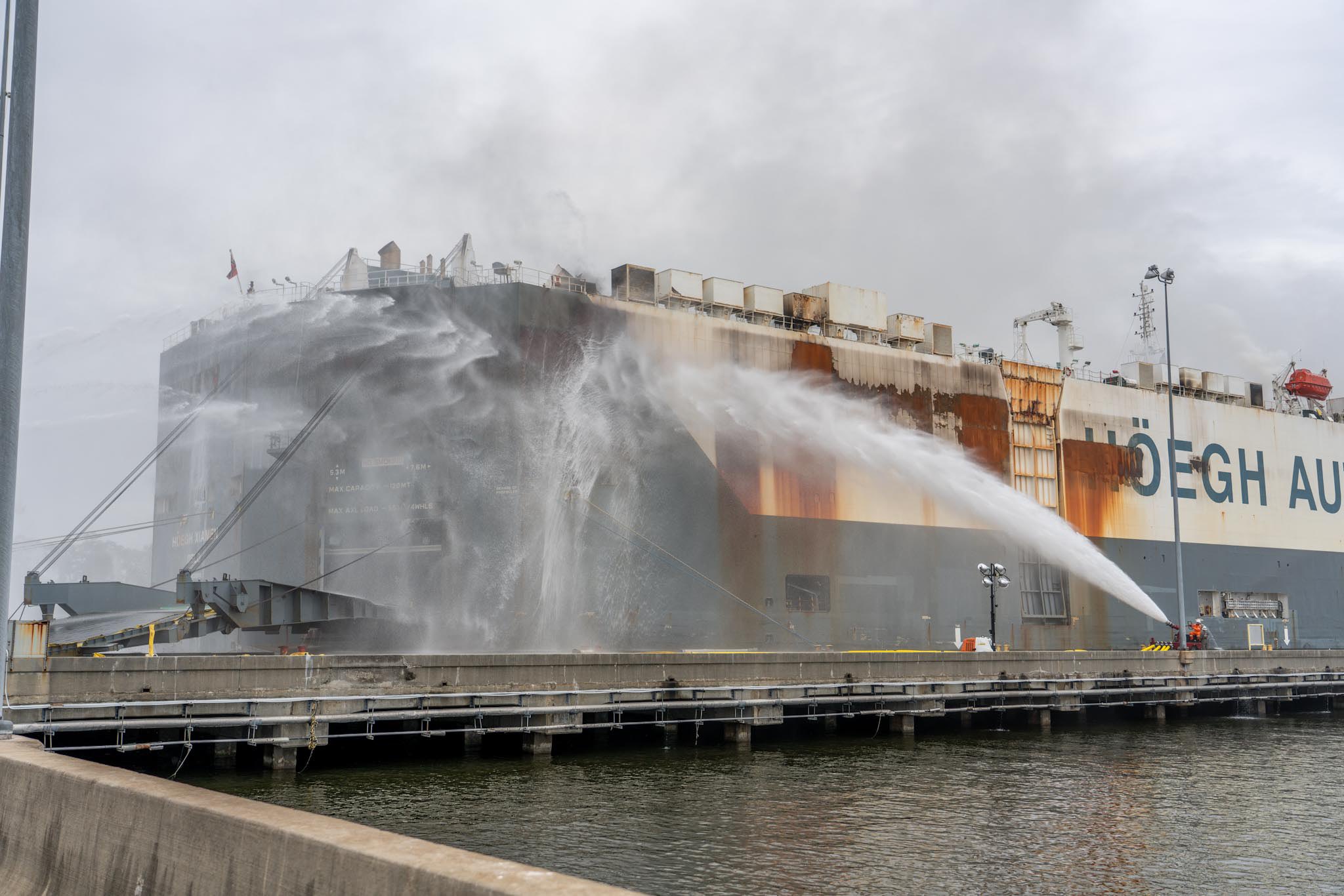 Fire fighting operations on board of the ro/ro carrier Höegh Xiamen are still ongoing following a fire outbreak in the port of Jacksonville, USA on June 4th. The 21 crew members of the vessel were safely evacuated, but eight firefighters were injured during the initial response.

The eight firefighters were transported to the hospital after an explosion on board of the ship. The Jacksonville Fire and Rescue Department says six of them have now been released, whereas two will need further surgery. They are in stable condition but with serious injuries.

The fire started on the seventh deck at around 16:00 hours (local time) on Thursday 4 June, shortly after the vessel had completed loading operations at Blount Island in Jacksonville.

Firefighters with Jacksonville Fire and Rescue Department and specialist marine firefighters with Resolve Marine Group continue to work to extinguish the blaze on several decks, with an ongoing focus on cooling the vessel’s exterior. This is being carried out by fire tugs alongside, which are spraying water on the vessel to keep it cool. An additional high capacity pump has also been deployed to significantly increase the amount of water on the hull.

Höegh Autoliners has activated its emergency response team and is working closely with all necessary authorities to contain the incident. The company’s priorities are to secure the vessel and ensure the preservation of the local environment, Höegh Autoliners states.

‘We are grateful for the assistance of the State of Florida, the US Coast Guard, the Port of Jacksonville and especially the firefighters whose ongoing hard work and expertise have brought the fire under control. Our thoughts and prayers remain with the firefighters who sustained injuries during the initial response to the fire and we wish them a speedy recovery,’ says Höegh Autoliners CEO Thor Jørgen Guttormsen.

So far, there have no reports of pollution. Containment booms have been placed around the vessel as a precautionary measure. Höegh Autoliners is working closely with all local authorities and response organisations to protect the local environment.

At this point, the cause for the fire remains unknown.

Day 3, cooling the ship with more than 25,000 gallons of water per minute on all sides… working with partners to a safe resolve to the situation. pic.twitter.com/G2rmjEaNtC

Curious about the technology we are using… drones with infrared cameras, measuring the temperatures faced, directing the streams to the hottest areas to maintain ship integrity… #usingtechnology @CityofJax @FirehouseNews pic.twitter.com/SRuydlorPB

Pray not only for the firefighters hurt and their families, but for all the other firefighters who treated them and stood beside them fighting this fire, and for all who risk their lives daily… pic.twitter.com/kePSFpvBef