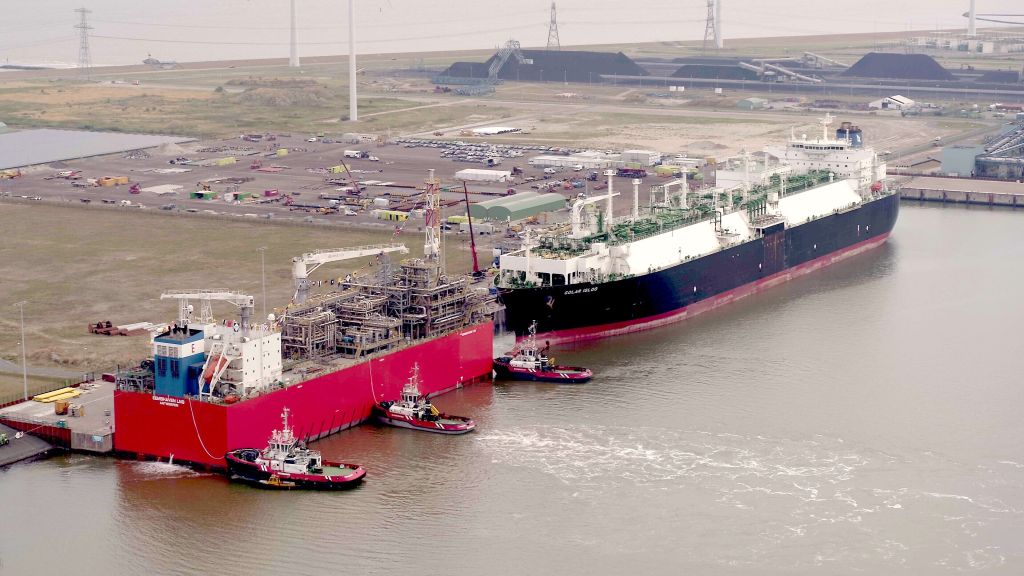 Two Floating Storage Regasification Units (FSRUs) have now arrived at Eemshaven, Groningen. Together, these two FSRUs comprise the EemsEnergyTerminal. The FSRUs form a floating LNG terminal that turns LNG delivered by tankers into gaseous form and feeds it into the national gas network.

The Golar Igloo (built by New Fortress Energy) arrived on 4 September followed by the Eemshaven LNG installation (built by Exmar) on 6 September. Both vessels were escorted by tugs from Wagenborg. The project is now entering the next phase, which involves making the terminal technically ready.

Incoming tankers transporting LNG will moor ship-to-ship to the Golar Igloo for unloading. From there, it can be transhipped to the Eemshaven LNG. Both FSRUs can regasify and feed gas into Gasunie’s gas pipeline network.

A natural gas pipeline and a hot water pipeline have been laid on the quay. There are also connecting pipelines between the FSRUs for the aforementioned transport of LNG. A new gas pipeline has been laid from the quay to Gasunie’s existing network. Outside the terminal, the gas pipeline is entirely underground. And although they are physically two FSRUs, EemsEnergyTerminal will provide services to users as a single terminal.

Gas is expected to flow through Gasunie‘s gas transport network for the first time in mid-September. EemsEnergyTerminal expects to be able to receive, unload and ship around eighteen LNG cargoes during the period up to 31 December 2022. The FSRUs are leased for a period of five years. The EemsEnergyTerminal will be able to make a total of 8 billion cubic metres of natural gas per year available to the national natural gas network after processing the LNG supplied.

The terminal will be completed in record time with approximately 500 employees involved, says Gasunie.

Han Fennema, CEO Gasunie: ‘The EemsEnergyTerminal makes an important contribution to the security of supply and helps the Netherlands and Europe to reduce their dependence on Russian gas. In the longer term, Gasunie wants to use the terminal for green hydrogen. In this way, the EemsEnergyTerminal will be able to contribute to the energy supply in the Netherlands and Europe for many years to come.’

Until this year, the Netherlands only had an LNG terminal in the port of Rotterdam. The expansion in the Eemshaven and the optimisation of the terminal in Rotterdam will double the import capacity for LNG.

Picture: The FSRUs Eemshaven LNG and the Golar Igloo are located in one of the Eemshaven harbour basins (by Gasunie).

Also read: Coalition to tackle methane emissions to minimise the impact of LNG in shipping