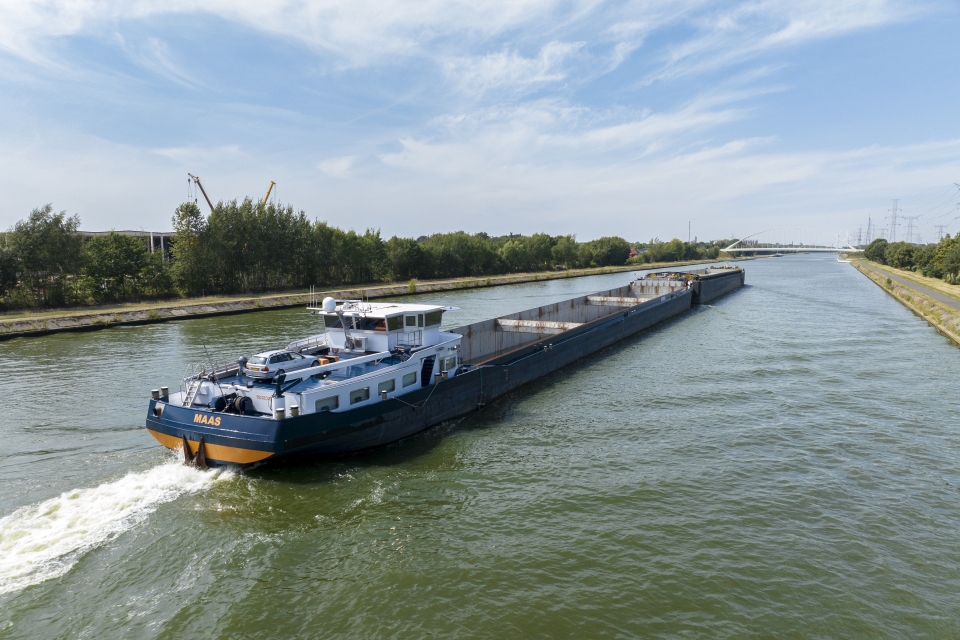 The arrival of inland vessel Maas at Holland Shipyards Group in Werkendam marks the start of the execution phase of the yard’s first hydrogen project. It will see the internal combustion technology replaced with hydrogen technology. The Dutch shipyard also delivered a second fully electric ferry to Schlepp- und Fährgesellschaft Kiel.

The retrofit of Future Proof Shipping‘s Maas has already taken months of preparation. Retrofitting means replacing the internal combustion technology with hydrogen technology, removing both main engine and gearbox, and installing a new modular propulsion system. This will consist of electric motors, hydrogen tanks, a PEM fuel cell system (necessary for converting hydrogen into electricity) and a battery system.

The compressed hydrogen tanks, the fuel cells and the battery system are separate units that can be removed for maintenance or replacement purposes.

The fuel cell system will be triple redundant with 825 kW capacity (to supply propulsion and auxiliary power) and a 504 kWh Lithium-ion battery pack for peak shaving, secondary and bridging power. The system will contain a 750V DC bus bar and an e-motor for propulsion.

After the previous deliveries of three hybrid ferries and one fully electric ferry, Schlepp- und Fährgesellschaft Kiel (SFK) christened its second electric ferry Wellingdorf on August 22. The christening ceremony took place in Kiel, where the ferry will be put in operation.

The Wellingdorf measures 24.70 by 7.20 metres and is a sister vessel of the previously delivered Düsternbrook. The vessel is completely emission-free and entirely powered by battery power with an installed capacity of 1092 kWh. Besides the battery pack, the vessel has twenty solar panels on the roof to provide the onboard power supply network.

Holland Shipyards notes that where almost all ferries referred to as “fully electric” still have backup power provided by a diesel engine, the Wellingdorf has no such backup and gets redundancies from the split battery system. This means that the ferry propulsion really is all-electric.

A noteworthy system on board of the ferry is the non-conventional automated mooring system which features electric-hydraulically operated mooring hooks in both sides of the ship. The mooring system is easily controlled from the wheelhouse by the captain. While moored, no power has to be directed to the propulsion system, resulting in a reduction in energy consumption.

With the new vessels, SFK is renewing its current fleet. The replacement of the fleet is in line with the environmental goals set by SFK and the city of Kiel. The city of Kiel aims to be CO2 neutral by 2050 and expects shipping to play a major part in this shift.