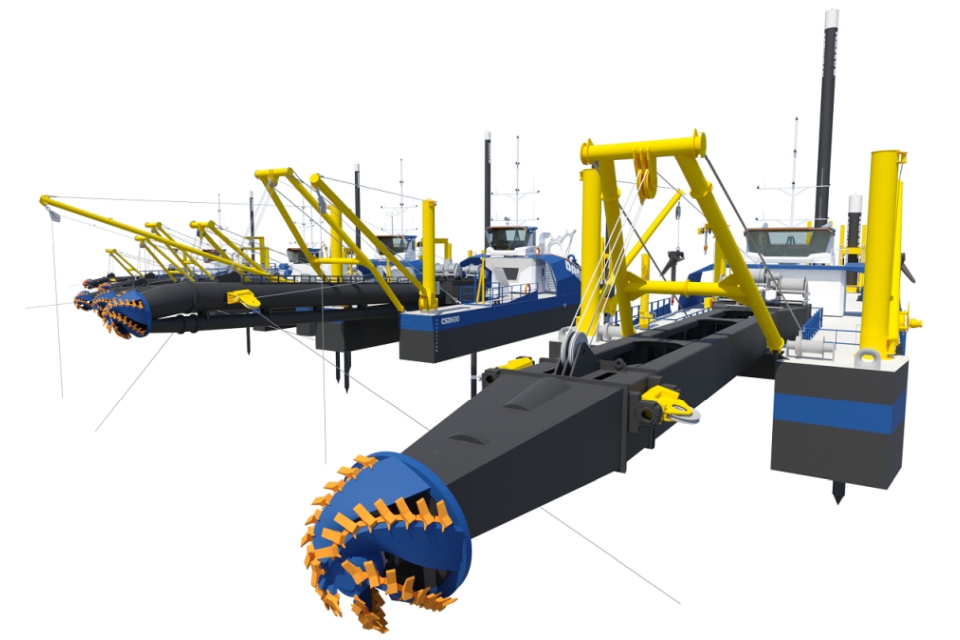 Damen Shipyards Group has unveiled a comprehensive new design for its Cutter Suction Dredger (CSD) range. The design has been completely overhauled and the result is said to be a series of vessels that, while looking familiar, deliver the latest in operations, sustainability and technology.

First introduced in 2004, more than 250 of the current range have been sold all around the world and over that time the designs have been continuously improved. However, last year the decision was taken to completely overhaul the range.

All design elements and components of the new CSD range have been reviewed using the feedback from customers, as well as the expertise from across the Damen Group and its suppliers. An advanced series of dredge pumps will deliver increased production and discharge distance. The latest CSDs have also been made as compact as possible to reduce transport costs. However, the advantage of the dredgers having a very large swing width is retained by maximising their length.

All the new models are transportable by road, while the largest vessel is optimised for towage. Additionally, the CSDs retain ample space for maintenance to take place, both above and below deck.

Extra features that reduce operational costs without loss in performance include single main engines, except for the largest dredger of the series, which also has an auxiliary engine. A separate genset is installed on each model to supply electrical power without having to run the main engine. It also ensures a stable power supply for all electric users including the sensors, instrumentation and automation.

The CSDs will have an extensive range of options to optimise each dredger for its project. The standard options are easy to fit or retrofit on a plug-and-play basis and the dredgers themselves are built for stock, ensuring short delivery times.

Regulations and sustainability considered throughout

Sustainability has been at the heart of the redesign process. An EU stage V plug-and-play option is available, and all the models are designed with full electrification in mind. Very little grease is required and the amount of hydraulic fluid used has been reduced by fifty per cent. The redesign process has also taken into account the latest regulatory and class rules.

Triton, Damen’s award-winning, remote monitoring platform is included across the range, and by collecting all the dredging data and making this available for the project office onshore, the dredge process and project execution can be optimised. An additional advantage is that remote maintenance is possible. Effort has also been made to reduce noise.

Production will take place in stages, starting with the CSD600, which is already being built. Over the next two years, it will be followed by the CSD450, CSD400, CSD500, CSD700 and finally the CSD300.