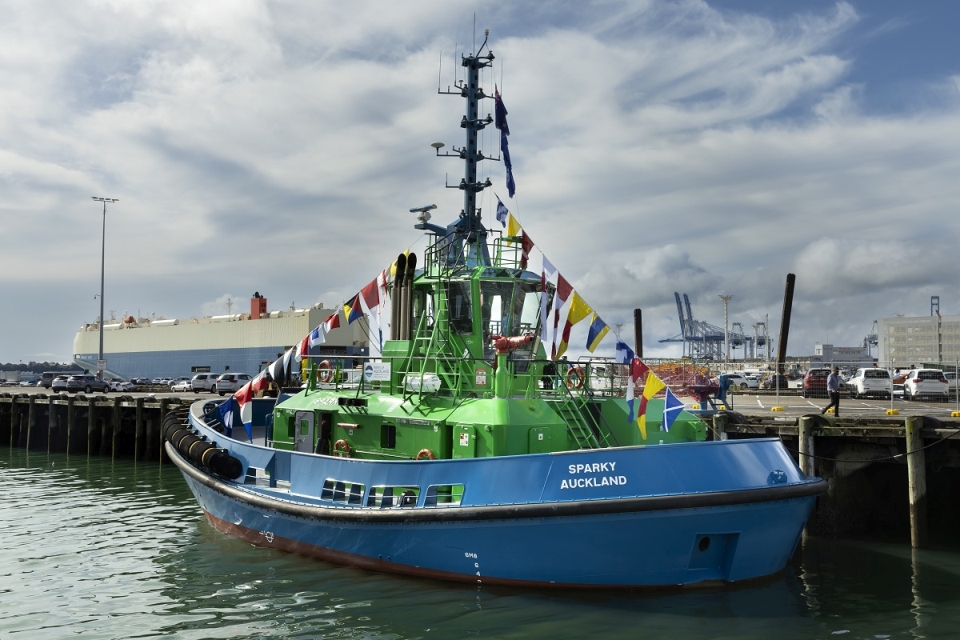 Damen’s first all-electric harbour tug, the RSD-E Tug 2513, was officially delivered to its new owner, Ports of Auckland. The revolutionary tug was named Sparky and also received its Māori name, Tiaki, in a special blessing ceremony held in Auckland on August 8.

The powerful new tug, which has a 70-tonne bollard pull, is capable of manoeuvring even the largest vessels and can undertake two or more assignments before being recharged, which takes just two hours.

In 2016, Ports of Auckland adopted the goal of becoming a zero emissions port by 2040 and, in light of the impetus to tackle climate change, the port authority challenged Damen to develop a fully electric tug. Over the course of the next six years, the two organisations worked closely to develop this pioneering, sustainable vessel type.

Caring for the environment

‘It is wonderful to have Sparky here in Auckland and to be able to get aboard and put her through her paces,’ says Ports of Auckland’s General Manager Marine and Multi Cargo Operations, Allan D’Souza. ‘We held a blessing ceremony with local Māori iwi (tribe) Ngāti Whātua Ōrākei, as a final step before we officially start operations. As part of the blessing, Ngāti Whātua Ōrākei gave Sparky her Māori name, Tiaki, which means to care for people or place, in recognition of her role in reducing emissions and our port’s impact on the environment.’

Arnout Damen, Chief Executive Officer of Damen: ‘I’m very proud about the fact that we can use our expertise together with our client to develop new sustainable ways of keeping ports operational, while lowering the impact on the environment as much as possible.’

Picture: Sparky, the world’s first full sized ship-handling electric tug during the blessing ceremony in Auckland at Ports of Auckland on 8 August (photo by Brett Phibbs/PhibbsVisuals).