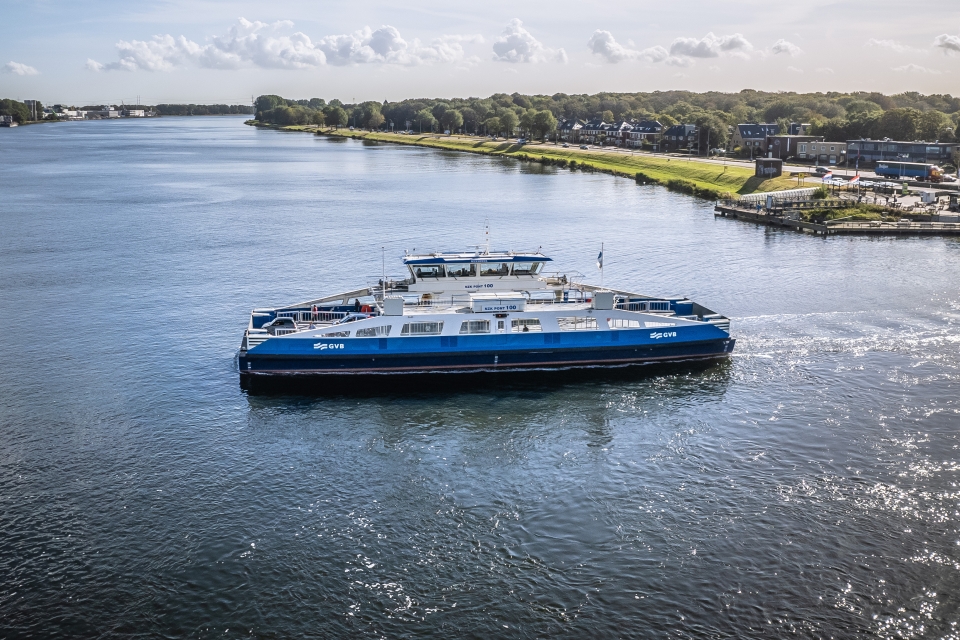 The fourth electric ferry that will sail across the North Sea Canal, the NZK Pont 103, was christened on Thursday, 12 May. The christening took place in Hardinxveld-Giessendam at Holland Shipyards Group (HSG), where the ferry was built.

The new “plug-in ferries” will replace all diesel ferries on the North Sea Canal by 2023 at the latest. HSG director Marco Hoogendoorn thinks it is very important for the Netherlands to take the initiative in making shipping more sustainable.

Keur, who was allowed to christen the ferry, spoke of a great honour to be part of a historic revolution in shipping: ‘Ninety years ago, most of the ferries started out as steam ferries and, like the Titanic, coal was burned inside the ferry. The first major change was the installation of the diesel engine. Now that there are almost no icebergs left to sail against, it is extremely important for us, but also for others, to go electric in order to slow down climate change.’

She adds: ‘GVB wants people who travel by public transport to be reassured that this is no longer at the expense of the planet. That already applied to metros and trams, in 2025 it will apply to all buses and next year already to the NZK ferries.’

The NZK 103 was designed and built in the Netherlands. Hoogendoorn: ‘The Netherlands, as a maritime country and with our top engineers, should also want to lead the way in this. After all, if we are ahead, everyone will knock on our door first.’

Shipping is perhaps the most challenging form of transport to make sustainable, due to the long investment periods, long distances and competition.

‘Without stimulation from the government, shipowners and owners will not make that move on their own,’ says Hoogendoorn. ‘We are therefore pleased that Amsterdam, together with GVB, is setting a good example.’

Ferries are ideally suited to running on batteries, due to the relatively short distances they travel on the same route. Hoogendoorn: ‘Where the distances are longer, the change is a technical nut to crack. In inland shipping, we are working on projects to equip existing ships with a mini hydrogen power plant.’

Picture: One of the GVB ferries previously delivered (by Holland Shipyards).