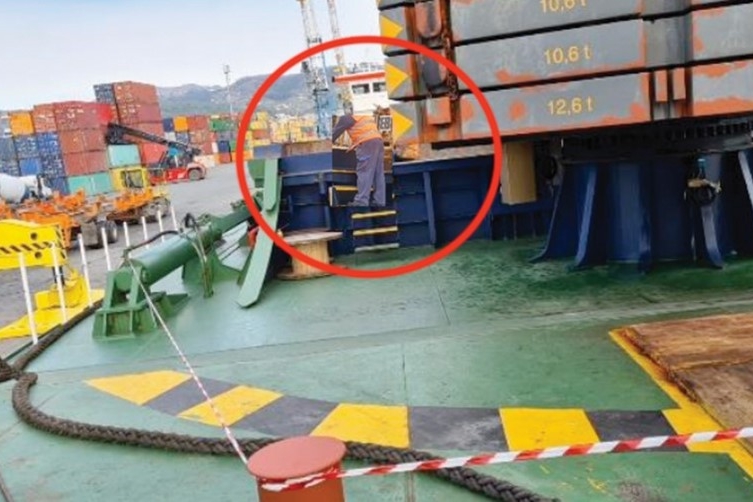 While symbolic barriers are better than nothing, it would be best to invest in physical barriers. The Nautical Institute gives this advice in its latest Mars Report in which a dredger’s master accessed the area where a crane was in operation and was crushed between the crane and cargo hold as a result.

The master, who was new to the ship and had joined only two weeks earlier, was occupied with administrative tasks. At one point, he decided to go on deck and check on some recent maintenance work at the bow. He took the access way on starboard side of the cargo hold to reach the forecastle (the port side access way had been cordoned off.) During this time, the crane operator, who was placing one boulder in position at the breakwater, noticed the master in proximity of the paint locker.

The crane operator heard a scream and turned the crane back towards the cargo hold. He immediately noticed the master lying on deck. He raised the alert and the chief engineer, who was on the bridge, called for shore medical assistance.

The master was admitted to the local hospital; he had suffered a massive hematoma, muscle laceration of the right abdominal wall, and a fractured vertebrae. The victim was discharged from hospital the next day and received further medical treatment once home.

The investigation found, among others, that although access to the forecastle from the port side of the cargo hold had been cordoned off by a physical barrier system (a chain), access to the forecastle from the starboard side was unobstructed. Black and yellow “hazardous area” markings were painted in a semi-circle on the deck around the crane, extending from port to starboard. But paint markings are a symbolic barrier system and therefore require one’s interpretation to be effective (as opposed to a physical barrier system).

This accident was covered in the Mars Reports, originally published as Mars 202224, that are part of Report Number 356. A selection of this Report will also be published in SWZ|Maritime’s July-August 2022 issue. The Nautical Institute compiles these reports to help prevent maritime accidents. That is why they are also published on SWZ|Maritime’s website.

Picture: A composite reenactment of the situation – the red and white danger tape was not present at the time of the accident.