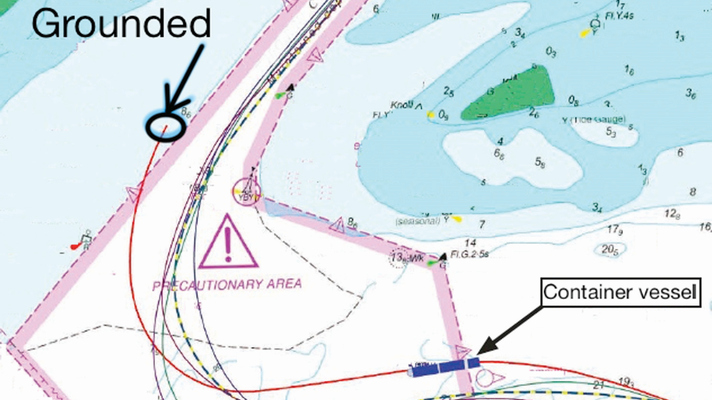 There is no such thing as a trivial shiphandling operation; all manoeuvres should be carefully prepared and communicated to the bridge team. In addition, masters should welcome any comments from the team. Read the latest Mars Reports to understand why.

The Mars Reports cover all kinds of maritime incidents such as (near) collisions and groundings, accidents with tools, falling objects injuring crew, accidents with rescue boats and so on.

A tanker had finished discharging cargo and moved to an anchorage to wash tanks and prepare for the next load. After washing, the master received orders to change anchorage to allow delivery of the washing water to a slop barge. Once at the new anchorage, Port Control told the bridge team (master, OOW and helmsman) that they were too close to
the port fairway.

The crew weighed anchor to reposition the vessel, but this introduced delays. The master was aware that the washing water should be delivered as soon as possible in order to respect the loading schedule at the next port. He expedited the manoeuvre to save time, but in the process the vessel came into contact with the fairway buoy. Although the buoy and vessel were damaged, there were no injuries or pollution.

The master was invited to the company office to assist the investigation team and help understand the causal factors of the incident. He was subsequently enrolled in a shiphandling course for large vessels. The OOW was replaced at the first convenient port and was subsequently enrolled in a BRM course to refresh his knowledge on participating in the bridge team during decision making.

The company investigation team found that:

Editor’s note: It is especially refreshing to see the company involve the Master in the investigation and to respond with additional training for both the Master and OOW rather than searching for a guilty party.

While underway a main engine low fuel pressure alarm sounded on the bridge. The crew member on watch entered the unmanned engine room and identified a high-pressure fuel leak spraying on the port engine’s turbocharger. There was also a large quantity of diesel fuel in the bilge.

The master arrived on scene just as the fuel ignited and began a fire. He attempted to extinguish the fire using a portable fire extinguisher, but without success. He activated the general alarm, secured the hatches, had crew members secure the ventilation dampers and closed the remote fuel shut-off valves to the engine room. The fire then quickly self-extinguished.

The investigation identified the source of the fuel leak as a rupture on a flexible fuel hose connected to the fuel filter assembly. The fuel filter assembly and its components were installed relatively close to the turbocharger on the inboard side of the engine. The heat radiating from the turbocharger components was very high and probably led to the degradation of the rubberised hoses nearby. However, the installation was in accordance with the manufacturer’s marine engine manual. A container vessel had been operating in the North Sea Sulphur Emission Control Area (SECA) for several days. The auxiliary boiler fuel supply had been switched from heavy fuel oil (HFO) to marine gas oil (MGO) to comply with emission regulations in the area. The boiler had cut out several times due to flame or ignition failures. On each occasion, the fault was investigated and the boiler reset by the second engineer.

Examination of the boiler fuel system identified a build-up of waxy deposits in the supply filter, sufficient to restrict the fuel flow. Samples of the MGO being burnt at the time of the accident were sent to a laboratory for analysis. The tests found that the fuel had a cold filter plugging point (CFPP) of 14°C and a pour point (PP) of less than -9°C; it therefore required a minimum fuel operating temperature of 15°C. The ambient air temperature at the accident location was about 4°C, low enough for wax to form. Safety Issue
Since the more stringent sulphur emissions limit was introduced, there has been an increased incidence of boiler and marine diesel engine problems in colder waters, industry reports suggest. This has been attributed to the increased paraffin content found in some low-sulphur MGOs, which leads to the formation of waxy deposits or crystals as the fuel temperature falls. Restricted fuel flow due to wax deposits in filters and pipework can cause intermittent and incomplete combustion to the point of flame failure. This could have unintended consequences, as in this case.

The paraffin content of MGOs varies globally due to disparate regional crude oil composition and refinery processes. Prior to March 2017, the often-used ISO 8217 standard focused on pour point. But this specification does not provide any indication of the temperature at which filtration issues may occur.

The addition of cold-flow improver chemicals to the low-sulphur MGO in the vessel’s storage tanks should only be considered as a last resort, and then only under the strict guidance of an additive supplier.

A tanker was in the process of mooring in a river berth. Two headlines were rigged on the same shore bollard (hooks), while the third was positioned on a second bollard. As the fore mooring party started to shorten up the lines, it was noted that one of the three headlines was twisted on the other two. The linesmen were called back to attend the vessel and to rearrange the fore headlines.

Two linesmen arrived. Once the line was slacked the linesmen started to haul in the line in order to have some slack to move it easily, using the winch positioned on top of the bollard. The fore mooring party was watching, waiting for the order from linesman to haul up.

When enough line had been hauled ashore, the linesmen shifted the eye of the rope on the hook. The linesman was in the process of removing the layer on the drum when the slacked rope suddenly moved ahead on the left, hitting the linesman and throwing him down the embankment and into the water. A small dredger was in port and a crew member was discharging a load of sand on the foredeck, using the vessel’s deck crane and grab.

Meanwhile, another crew member was assembling some containers of old oil on the port foredeck in preparation for disembarking the oil ashore.

The crew member who was assembling the containers was in a vulnerable position on the port side, where the crane operator could not see him. He was trapped by the counterweight against the ship’s bulwark. He collapsed and was quickly attended to but was later declared deceased. The official investigation found, among others that: Editor’s note: This really was an accident waiting to happen. An inexperienced crew member was put into a dangerous environment where hazards were unmarked and unprotected.

An ultra-large container vessel (399m LOA) was inbound in a restricted channel under pilotage, in darkness and on a rising tide.

The bridge team included two pilots, an OOW and helmsman as well as the master and a lookout. The lead pilot was using a portable pilot unit (PPU) to con the vessel while the master exchanged information with the assistant pilot. The assistant pilot used a partly completed port passage plan form and the port’s generic passage plan guidance leaflets to help explain the pilotage and berthing plans. At one point the lead pilot received a call to his mobile telephone from the pilot on an outbound vessel to discuss how and where they would execute the meeting manoeuvre between the two vessels. Both pilots agreed to a conventional port to port meeting, with the speed of the container ship being adjusted to ensure the meeting took place to the east of the precautionary area, a place in the channel where a large turn to starboard was required.

The container vessel was now making 12 kt and the lead pilot informed the master of his planned manoeuvre into the precautionary area in order to make a turn first to port to allow for more sea room and then to large starboard.

To combat the strong flood tide and prevailing headwind, the lead pilot stated that he intended to navigate the vessel ‘deep’ into the precautionary area before beginning the starboard turn.

The lead pilot gave the helmsman a series of courses to steer that, over the next four minutes, brought the vessel on to a heading of 260°.

Shortly afterwards, the lead pilot ordered the starboard turn and the engine set to full ahead. Soon, he expressed concern to the assistant pilot about the turn. At the same time, the master expressed similar concern to the OOW in his native language, Romanian.

Soon after, the container vessel grounded with the engine at full ahead. The master implemented the vessel’s emergency procedures. The crew’s initial inspections and tank soundings indicated that the vessel’s hull had not been breached. Tugs quickly freed the vessel on the rising tide.

Some of the report’s findings include:

Editor’s note: The report also states: ‘It is accepted that detailed plans for complex pilotages cannot always be produced by navigating officers and ports prior to a vessel’s arrival at a pilotage station, and that vessels often need to deviate from planned tracks in busy and congested waters. However, realistic intended tracks need to be plotted and key decision points identified.’ This basic premise has been identified by other investigative agencies. In Canada, for example, the Transportation Safety Board published a recommendation with similar ideals in 1994.