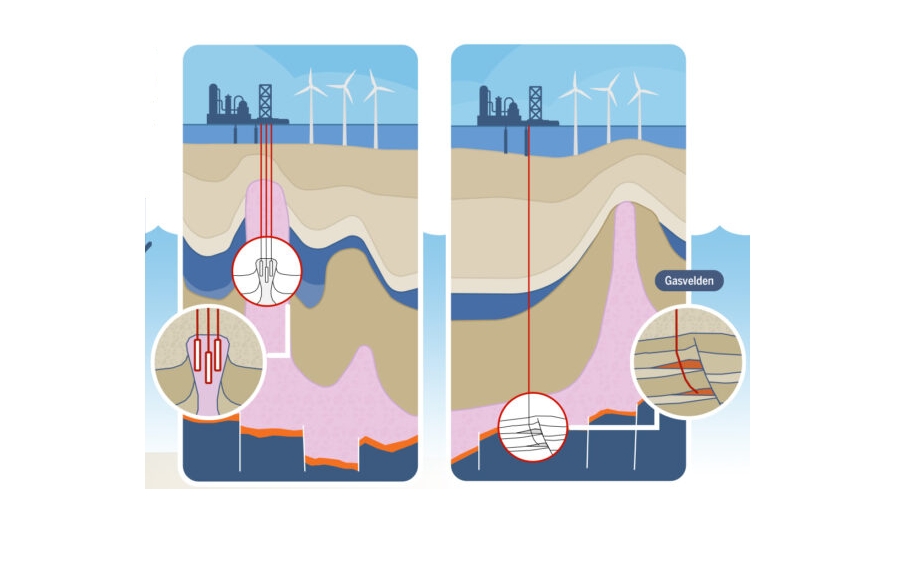 Underground storage of hydrogen at sea appears to be a technically feasible and relevant option to include in the planning and construction of the future energy system. That is the main finding of a study by Energie Beheer Nederland (EBN) and Dutch reseach institute TNO.

The study into the feasibility of underground hydrogen storage at sea was commissioned by the Ministry of Economic Affairs and Climate Change. However the study also finds that a number of preconditions must be met for the storage to be realised and further research is required.

The study looked into storing hydrogen underground in the Dutch part of the North Sea. In an earlier study from 2021, TNO and EBN foresaw that between 2030 and 2050, when large-scale production and import of hydrogen will have started, the storage capacity of up to four salt caverns on land, which is currently foreseen around 2030, will no longer be sufficient. By 2050, storage needs for hydrogen could increase to ten to 65 salt caverns and zero to five gas fields, depending on various scenarios.

The possibility of storing hydrogen in salt caverns has already been proven in projects in England and the United States. Under the North Sea, as well as on land, there are several salt structures that may be suitable. Exploratory research, including test drilling, is needed to confirm the possibilities at individual locations.

A point for attention is how to deal with the brine that is released during the construction of caverns at sea. Discharging brine is not permitted under current legislation. One option is to transport the brine to land for further processing into industrial raw material.

There are many gas fields in the Dutch North Sea that could be considered for hydrogen storage. Most of these gas fields have already been developed and connected to a platform and natural gas infrastructure.

Depending on the type of storage, the cost of the required facilities and infrastructure is between one and a half and two and a half times higher on sea than on land. For seasonal and strategic storage, the quantity of gas required to keep the storage facility pressurised – the so-called pillow gas – accounts for some sixty to seventy per cent of the costs. This part of the cost is not different from underground hydrogen storage on land.

In the realisation of underground hydrogen storage, the researchers have identified various opportunities for possible synergy with other activities at sea, which can be investigated further. Examples include the reuse of existing infrastructure such as offshore gas transport pipelines or CO2 storage facilities that can subsequently be used for hydrogen storage.

Which type of storage is needed at which location and in which form depends, among other things, on how the market for hydrogen develops in the coming years.

The international perspective is also important: in Germany, for example, several pilots with hydrogen storage in caverns are in preparation. Some of these locations are connected to the Dutch transport network. This could possibly result in shared hydrogen storage capacity, as is currently the case with natural gas and oil storage.

Follow-up steps in the short term

There appear to be no general showstoppers for hydrogen storage at sea, other than possible showstoppers that also play a role in construction on land. Significant development times of ten to fifteen years must be taken into account for the development of underground hydrogen storage at sea. This means that if the first storage facility is to be available shortly after 2030, further steps will have to be taken in the short term.