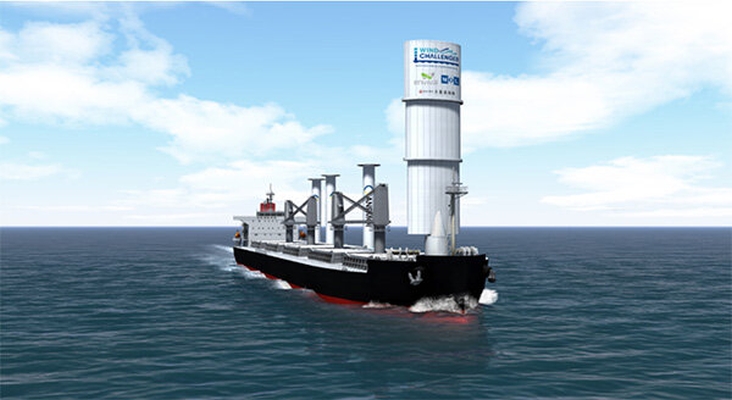 Mitsui O.S.K. Lines (MOL) plans to equip a second bulk carrier with the Wind Challenger hard sail system, which harnesses the power of wind to propel the vessel. MOL Group company MOL Drybulk will operate the vessel, which will transport wood pellets for Enviva Inc.

Enviva is a producer of sustainable wood bioenergy and has signed a construction contract for the new ship with Oshima Shipbuilding. The vessel, slated for delivery in 2024, will be the second Wind Challenger-equipped vessel in the MOL Group fleet, following one scheduled to enter services for Tohoku Electric Power in October of this year.

The Wind Challenger is a telescoping hard sail that converts wind energy to propulsive force. Installation of one Wind Challenger sail on merchant ships has the potential to significantly reduce fuel consumption, which in turn is said to reduce GHG emissions by about five to eight per cent.

MOL Group is also examining the feasibility of adopting Rotor Sails, an auxiliary wind propulsion system developed by Anemoi Marine Technologies Ltd, of the UK. Combined use of both the Wind Challenger and Rotor Sails is expected to reduce greenhouse gas (GHG) emissions by an average of twenty per cent.

MOL wants to achieve net zero GHG emissions by 2050. It will further push forward adoption of energy-saving technologies using wind such as the Wind Challenger and Rotor Sails, to help reduce GHG emissions and realise a low- and de-carbonised society.

Picture: CG rendering of a bulk carrier equipped with the Wind Challenger and Rotor Sails