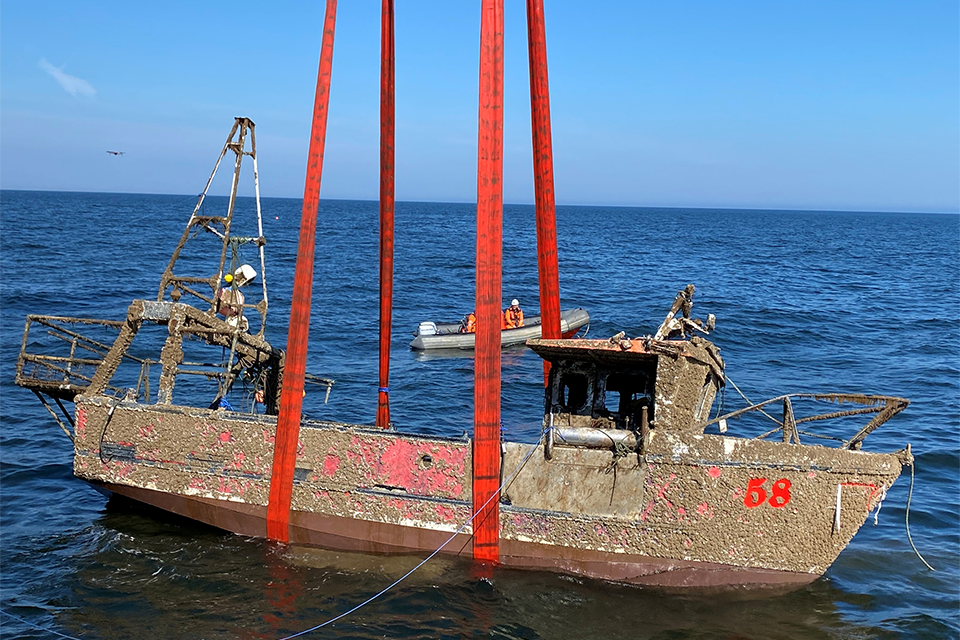 The Maritime Accident Investigation Branch (MAIB) has investigated the capsizing and foundering of the whelk potter Nicola Faith (BS58), resulting in the loss of all three crew in January 2021. One of the causes found were unauthorised modifications which compromised stability.

On the 27 January 2021, the 9.81-metre whelk potter Nicola Faith was fishing about 2-3 miles offshore and relocating whelk pots. Loaded with a day’s catch and four strings of pots (approximately 240 in total) to be relocated, the vessel capsized and foundered with the loss of all three of its crew.

The vessel was not equipped with an Emergency Position Indicating Radio Beacon (EPIRB) nor were the crew wearing personal locator beacons (PLBs). The absence of this mandatory safety equipment meant the alarm was not raised for some sixteen hours after the foundering, and the subsequent search and rescue operation found no trace of Nicola Faith or its crew.

The MAIB investigation found that the boat had undergone extensive modifications in the two years before the accident, none of which had been approved by the UK Maritime and Coastguard Agency (MCA). The modifications had eroded its stability safety margin and this meant that, when combined with an estimated 2090 kg of catch plus a weighed 2521 kg of fishing gear on board at the time of the accident, the vessel had a very small amount of positive stability.

The working deck was cluttered and partially covered by a canopy made from steel tubes and plywood sheets. The vessel capsized quickly; this is likely to have trapped the crew on board and they were probably taken down with the vessel when it sank.

Also read: Do you know how unusual cargo may impact your ship’s stability?

When Nicola Faith was built it had adequate stability for its designed purpose. The unauthorised modifications carried out to the vessel severely compromised its stability. Thought must be given to how planned modifications will affect a vessel’s stability and may involve the services of a naval architect to accurately calculate what effect the additions or changes to the vessel will have on the stability safety margin. Additionally, permission must be sought from the the UK MCA before any significant modifications are undertaken.

Skippers should have a good understanding of their vessel’s underlying stability and how this can change during fishing operations. Simple roll tests, heel tests, or a Wolfson assessment will provide skippers with the basic information. Loading a vessel heavily with catch, and then adding retrieved fishing gear, can quickly render a vessel unstable.

EPIRBs and/or PLBs are mandatory safety equipment for very good reason. Their purpose, to transmit the location of an incident and thereby focus any search and rescue effort, undoubtedly saves lives. A personal flotation device (PFD) can keep a casualty afloat sufficiently long enough for the rescue services, or their own vessel, to find them.

Also read: Dutch Safety Board: Trawlers with nets on one side at risk of capsizing