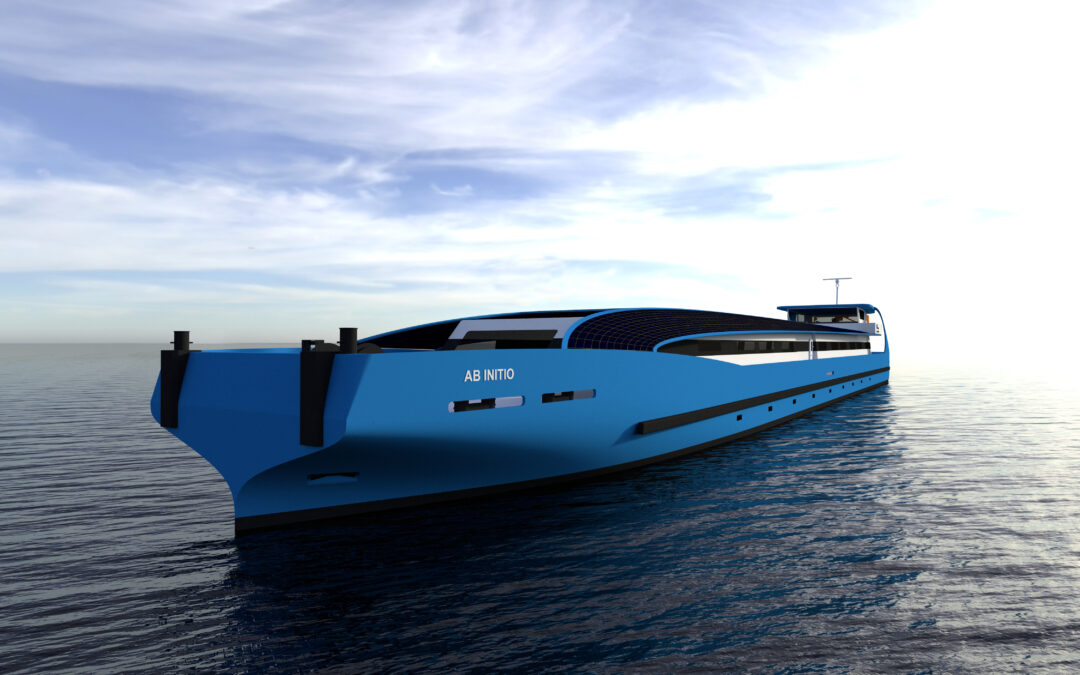 The futuristic-looking training ship of the Rotterdam-based STC Group, the Ab Initio (67 x 8.20 metres), will soon be sailing emission-free for hours at a time in the Port of Rotterdam. The inland vessel will be equipped with a lithium-ion battery pack, a 50 kW fuel cell module running on hydrogen gas and eighty solar panels.

With full batteries (400 kWh) and hydrogen tanks (33 kg), the Ab Initio can sail without emissions for at least eight hours. Then the batteries and tanks have to be refilled or one of the GTL (gas-to-liquid) powered Stage V certified generators has to be started.

The decision to purchase a fuel cell module built by Zepp.solutions in Delft was only made during construction. The system was not in the original design and there was no money for it at the time.

‘But we saw it as an important system for future inland navigation,’ says STC project supervisor Nicole van Spronsen, who was succeeded by Marjolein Mahu at the end of March. Through subsidy applications and sponsorships, we managed to more than double the original construction budget of 3 million euros. Various maritime suppliers wanted to sponsor us and we were thus given an advantage in the choice of components.

Getting to know various systems

The sponsorship campaign also yielded interesting choices from an educational point of view. ‘For example, two companies offered an environmentally friendly ultrasonic antifouling system,’ says Van Spronsen. ‘One system now protects the bunker coolers and the other protects the surface. For suppliers, the installation of their products is interesting because future skippers get to know them during their training.

There are also two generators from two different suppliers on board. In the stern, there is a 280-kW generator from Volvo-Penta and in the bow a 600 kW KEES Generator from Koedood. Alphatron supplies the navigation equipment, carpenter Hoogendoorn the lectern and EST-Floattech the batteries. Veth Propulsion supplied a 200-kW bow thruster with 360-degree rotating steering grid.

‘Thrusters have been considered, but 95 per cent of inland navigation vessels have normal propellers with rudders,’ says owner Marco de Waal of Machinefabriek de Waal. So it is better to use that on a training vessel as well.’

De Waal provides the bolt behind the propeller with a flow cap. ‘This improves the flow and prevents the bolt from corroding,’ says De Waal. ‘We are supplying the steering gear with an extra control panel. The student will soon be sitting in the middle of the lectern. To the right of that, carpenter Hoogendoorn is building an extra island for the instructor on which all the control levers for propulsion, steering and bow thruster are located as well. The instructor can therefore intervene instantly when necessary.’

The main contractor Concordia Damen of Werkendam facilitated the adjustments needed for the fuel cell unit during construction. ‘They were even happy to do so,’ says Van Spronsen. ‘And Lloyd’s Register offered to provide the certification for the vessel and the hydrogen system.’

‘The complete fuel cell unit, including pressure tanks, will be placed on the forward side of the upper deck,’ says project manager Nico de Bie of Concordia Damen. ‘Because the decision to purchase it was made at a late stage, it did not fit in one of the engine rooms. One of the adjustments we have to make for the hydrogen system, is to fit an extra A 60 fire-resistant insulation layer between the student areas and the fuel cell system.’

‘It is a complete platform that can be connected directly to the ship’s DC bus (direct current system) once installed. Once the connection is made, the fuel cell module knows exactly what power is required and will then start delivering it,’ explains co-founder and co-owner Jonas Brendelberger of the company that emerged from TU Delft’s Forze Hydrogen Racing Team in 2017.

‘The module also regulates the storage of produced power in the batteries when required. In these systems, fuel cells and batteries are connected to the same DC bus. When the power demand is so low that the engines do not use the full power of the fuel cell, the remaining power recharges the battery.’

The hybrid Ab Initio was originally only supposed to be able to sail emission-free on its batteries for four hours at a time. ‘Through the fuel cell, a similar amount of energy is added during the journey,’ says Brendelberger. ‘The fuel cell therefore acts as a range extender that adds four more hours. When sailing, the electric motor always needs more power than the fuel cell can provide at a maximum. So additional power will always be taken from the batteries.’

At a pressure of 350 bar, 33 kilos of hydrogen will soon be carried in the high-pressure tanks. The fuel cell will convert that into electricity with an efficiency of fifty per cent.

‘That is enough for 500 kWh of emission-free power,’ Brendelberger says. ‘With more hydrogen tanks, the cell would of course be able to provide power for longer, but then the battery capacity would also have to be increased to provide sufficient propulsion power for a longer period. After all, the maximum power of the fuel cell remains 50 kW.’

Hydrogen will soon be bunkered at a hydrogen station in the port of Rotterdam. ‘Bunkering hydrogen and working with the fuel cell are part of the students’ learning process,’ says Van Spronsen. ‘They get to know this system of the future during their studies.’

The selected PEM fuel cell is capable of delivering the specified power for 20,000 to 30,000 hours. ‘However, due to ageing, the voltage, and thus the efficiency, of a fuel cell decreases very slowly,’ Brendelberger explains. After 20,000 to 30,000 hours (depending on the average load), the cell will no longer be able to deliver the required maximum power. The cell will continue to function, but will no longer reach its efficiency.

The possibility of installing larger fuel cells or other emission-free energy systems to replace one of the generators in the future has been taken into account in the construction of the ship. ‘The drive train is modular and there are hatches above the generators so that they can be replaced in the future by more environmentally friendly alternatives,’ Van Spronsen says.

The wind turbine in the original design by C-Job Naval Architects and Concordia Damen was dropped because of the fuel cell. Van Spronsen: ‘That’s where the fuel cell system will be built.’ The fuel cell does not replace a diesel generator. ‘These remain and are intended for use on the longer journeys through Germany and Belgium.’

The Ab Initio should be operational at the start of the new school year, in September 2022. The trial runs were planned for June, just before STC’s summer holiday. During the holiday period, the permanent crew can get used to the ship.

There will be a professional kitchen on board, from which wastewater will be cleaned, just like the toilet water and other wastewater, before being discharged.

A special feature is the training room adjacent to the engine room in the stern. ‘It has a sound-proof window that offers a view of the engine room,’ says Van Spronsen. ‘In this way, the teacher can explain what is happening there without any interfering engine room noises.’

Teaching material for technical education is also being developed using virtual reality glasses. ‘This way, students in the engine room can see additional information about the machines they are looking at on the screen of their HoloLens glasses,’ explains Van Spronsen. ‘The engine rooms are set up in such a way that students have good access to everything.’

The intention is that such a virtual reality training will soon be possible on the entire ship. The ship has already been reconstructed on the simulators of the STC, so that people can already practice sailing on the simulator. The ship will be equipped with remote sensors on the wearing parts and other relevant information can also be read remotely at STC. This makes smart maintenance possible, among other things. Fuel consumption, course, speed, battery level and fuel cell data and consumption will soon be available at the school.

The Ab Initio has a push bow with two coupling winches, so that in practice one can train the coupling and uncoupling of barges.

‘That makes it possible to couple a tanker barge, for example,’ says De Bie. ‘Students can learn how to work with manifolds and what is involved in loading and unloading hazardous substances in tanker shipping.’

STC does not have its own barge, but these can be borrowed or hired. Because the training ship often has to practise using anchors, it will be fitted with stainless steel wear plates near the hawsepipes.

In addition to being a training vessel, the Ab Initio is an innovative fieldlab. In cooperation with hbo (Higher Vocational Education) students, companies can test innovative maritime products and services in practice.