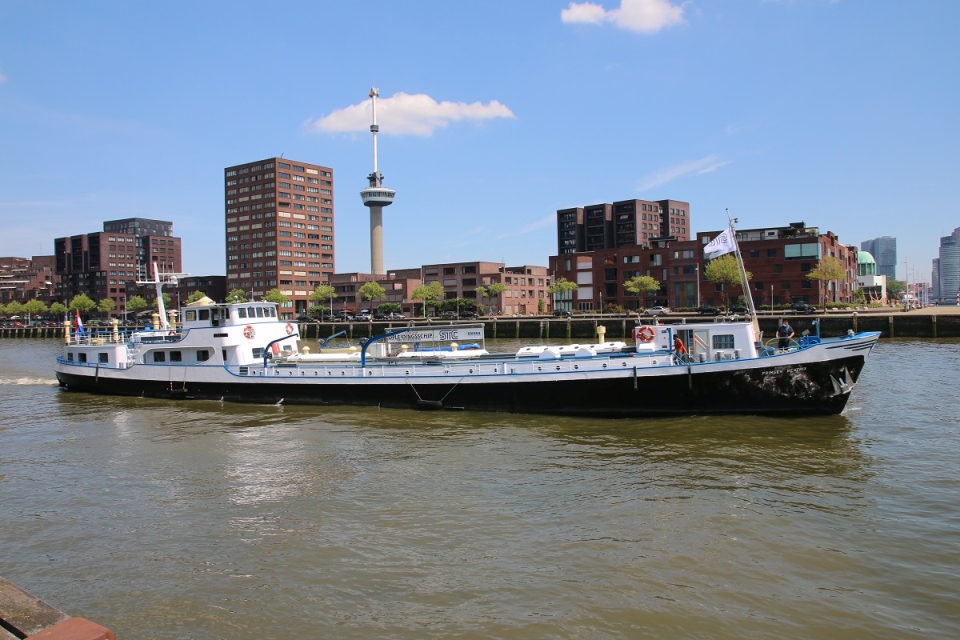 The training vessel Prinses Beatrix for inland shipping deckhands and skippers will get its own berth at the harbour of the “Binnenvaartmuseum” (Inland Shipping Museum) in the Dutch city of Dordrecht. Shipyard Concordia Damen will lend out the ship to the inland shipping society “Vereniging De Binnenvaart”.

The vessel was symbolically handed over on 19 May during the Maritime Industry trade show in Gorinchem, the Netherlands.

Aboard the Prinses Beatrix, an exhibition will tell the story of the education that the Dutch Royal Education Fund for Shipping (KOF) offered from 1955 up to 2003. From 1960 on, practical lessons were taught aboard the inland vessel of the type “Kempenaar”. With 53.50 metres in length and a beam of 7.08 metres, it was a modern ship at that time.

This practical education was in line with modern navigational practice in the 1960s. A class of 28 could stay aboard. Later on, the dormitory was converted into two-person cabins, reducing the capacity to 24 students during multiple-day exercises along the lower- and middle Rhine. The Prinses Beatrix was commissioned in 1960.

In 1962 and 1963 respectively, the Prinses Irene and Prinses Christina were added to the fleet. These sister ships are still in use as training vessels. The first of the series of three is now available for visits at the museum and for occasional tours.

Concordia Damen will be the owner of both the Prinses Beatrix and Prinses Christina when the maritime education institute STC takes delivery of the innovative and sustainable training vessel Ab Initio. To build this ship, STC had been looking for sufficient funding. The construction got possible when Concordia Damen agreed to purchase the older training vessels.

The Prinses Christina will continue its service as a training vessel to operate over the rivers under German flag with a new owner. Preparation for the Prinses Beatrix for its new role as a museum ship, consists of extensive servicing and to restore the hull paint in the original color white.

‘Concordia Damen recognises that it is important to preserve this valuable historic vessel,’ says financial manager Tim van Berchum of Concordia Damen. ‘The ship will remain ours, but we will make it available to Vereniging de Binnenvaart. We will perform extensive servicing before delivery to the museum.’