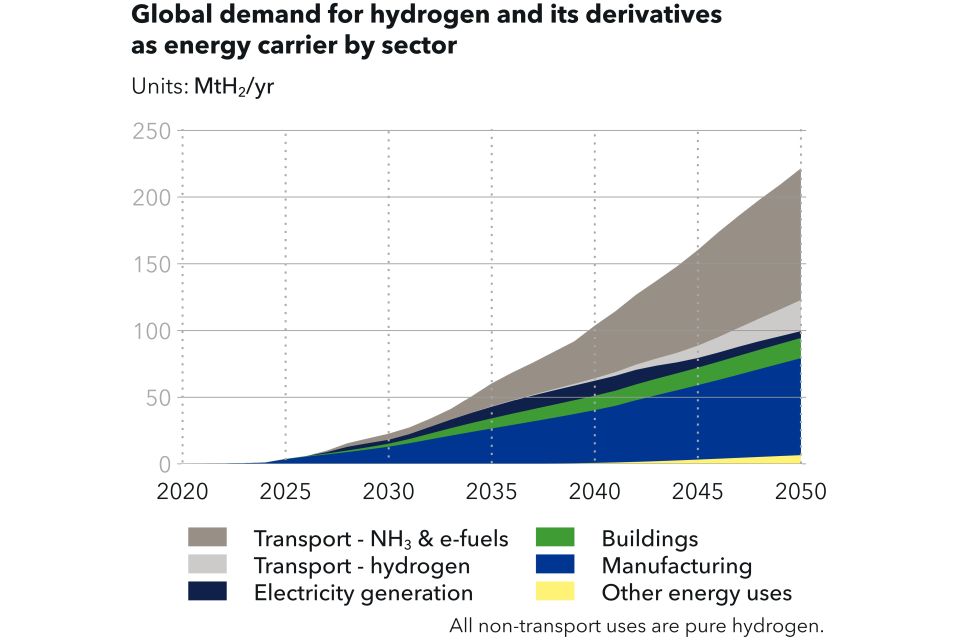 Hydrogen has a crucial role in decarbonising the world’s energy system, but uptake will be too slow. Governments need to make urgent, significant policy interventions, according to a new report by DNV.

In Hydrogen Forecast to 2050, DNV predicts the amount of hydrogen in the energy mix will be only 0.5 per cent in 2030 and five per cent in 2050. However, to meet the targets of the Paris Agreement, hydrogen uptake would need to triple to meet fifteen per cent of energy demand by mid-century.

‘Hydrogen is essential to decarbonise sectors that cannot be electrified, like aviation, maritime, and high-heat manufacturing and should therefore be prioritised for these sectors,’ says Remi Eriksen, Group President and CEO of DNV. ‘Policies do not match hydrogen’s importance. They will also need to support the scaling of renewable energy generation and carbon capture and storage as crucial elements in producing low-carbon hydrogen.’

According to Hydrogen Forecast to 2050, electricity-based green hydrogen – produced by splitting hydrogen from water using electrolysers – will be the dominant form of production by the middle of the century, accounting for 72 per cent of output. This will require a surplus of renewable energy, to power an electrolyser capacity of 3100 gigawatts. This is more than twice the total installed generation capacity of solar and wind today.

Blue hydrogen – produced from natural gas with emissions captured – has a greater role to play in the shorter term (around thirty per cent of total production in 2030), but its competitiveness will reduce as renewable energy capacity increases and prices drop.

Global spend on producing hydrogen for energy purposes from now until 2050 will be USD 6.8 trillion, with an additional USD 180 billion spent on hydrogen pipelines and USD 530 billion on building and operating ammonia terminals, according to DNV’s forecasts.

Cost considerations will lead to more than fifty per cent of hydrogen pipelines globally being repurposed from natural gas pipelines, as the cost to repurpose pipelines is expected to be just ten to 35 per cent of new construction costs. Hydrogen will be transported by pipelines up to medium distances within and between countries, but not between continents.

Also read: Port of Rotterdam plans to supply Europe with 4.6 megatonnes of hydrogen by 2030

Ammonia and methanol are key to decarbonising shipping

Global hydrogen trade will also be limited by the high cost of liquefying hydrogen for ship transport and the low energy density of hydrogen. The hydrogen derivative ammonia, which is more stable and can be more readily transported by ship, will be traded globally.

Early uptake of hydrogen will be led by hard-to-abate, high-heat manufacturing processes such as iron and steel production which currently use coal and natural gas. Hydrogen derivatives, such as ammonia and methanol, are key to decarbonising heavy transport like shipping and aviation, but these fuels won’t scale until the 2030s according to DNV’s forecasts.

Hydrogen will not see uptake in passenger vehicles, and only limited uptake in power generation. Hydrogen for heating of buildings will not scale globally, but will see early uptake in some regions that already have extensive gas infrastructure.

The uptake of hydrogen will differ significantly by region, heavily influenced by policy. Europe is the forerunner with hydrogen set to take eleven per cent of the energy mix by 2050, as enabling policies both kickstart the scaling of hydrogen production and stimulate end-use.

OECD Pacific (hydrogen eight per cent of energy mix in 2050) and North America (seven per cent) regions also have strategies, targets, and funding pushing the supply-side, but have lower carbon-prices and less concrete targets and policies. Greater China (six per cent) follows on, recently providing more clarity on funding and hydrogen prospects towards 2035, coupled with an expanding national emissions trading scheme.

These four regions will together consume two-thirds of global hydrogen demand for energy purposes by 2050.