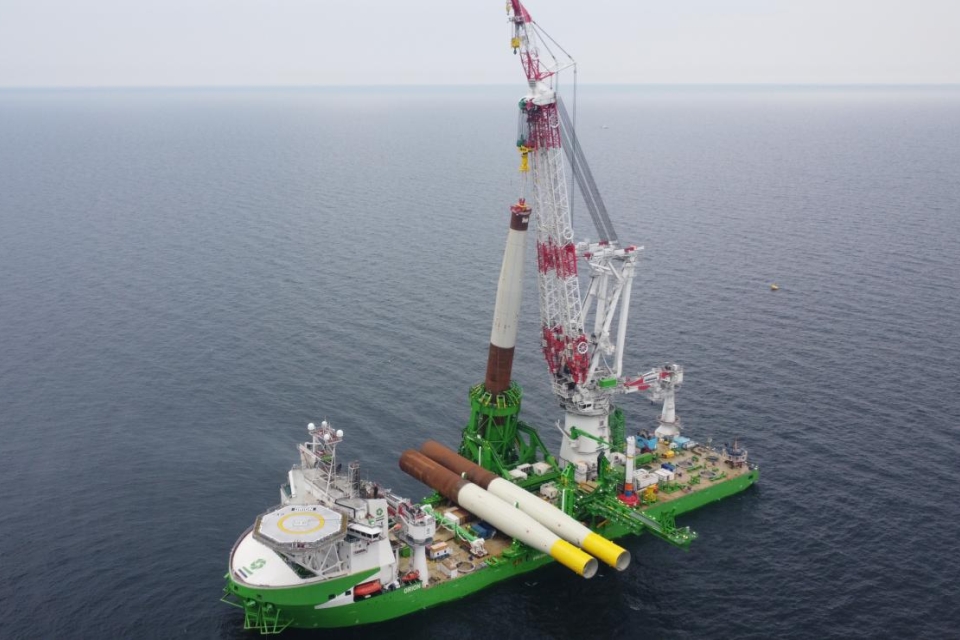 After a two-year delay following an accident with the vessel’s crane during load tests, DEME’s latest addition to the fleet, the Orion, has been deployed for the first time. The offshore installation vessel has successfully installed the first XXL monopile at Parkwind’s Arcadis Ost 1 offshore wind farm in Germany.

DEME’s floating DP3 offshore installation vessel is set to install the 28 giant monopiles, which at 110 metres long are the largest monopile foundations ever built in Europe, weighing more than 2000 tonnes each. Orion is said to be the first floating monohulled vessel able to perform these operations, speeding up installation times dramatically.

Alongside its ability to handle the next generation mega foundations and turbines, Orion has dual fuel engines and is being powered by LNG at the Arcadis Ost 1 project, significantly reducing the CO2 footprint of the operations.

Arcadis Ost 1 is located in the German Baltic Sea to the northeast of Rügen island. Every element of this offshore wind project pushes the limits of industry standards. Orion is equipped with a 5000-tonne crane and a tailor-made, motion compensated gripper system able to handle enormous foundations of up to 2500 tonnes.

The integrated motion compensated pile gripper tool enables the crew to upend the monopiles, which are transported horizontally on deck. Coupled with the vessel’s DP3 capability, the gripper enables the monopiles to remain vertical and stable, despite motions and waves. In the gripper, several noise mitigation systems are integrated in order to reduce the underwater noise during hammering.

With a total installed power of 44,180 kW and at 216.5 metres long, Orion has a spacious, unobstructed deck and a deadweight that has been maximised so it can handle the heaviest monopiles, jackets and wind turbine components.

‘The Arcadis Ost 1 offshore wind farm is an incredible project, given the scale of these foundations and it requires an equally exceptional vessel, which is pushing boundaries and bringing the industry standards of innovation to a new level,’ says Bas Nekeman, DEME Offshore Business Unit Director Northern Europe. ‘It is wonderful to partner with Parkwind, which also shares our vision regarding the importance of offshore wind in helping the world achieve the energy transition as soon as possible.’

In May 2020, Orion was in the port of Rostock after having its 5000-tonne heavy-lift Liebherr crane installed. During the load test of the crane (35 metres outreach and 175 metres hoisting height), the hook collapsed with the result that the complete crane collapsed. The cause of the crane losing its load, was the crane hook, the stem of which broke during the test. Liebherr had ordered the crane hook from a third party, Dutch Ropeblock.

Liebherr then set about repairing the crane. The HLC 295000 is the largest offshore crane Liebherr has ever manufactured. The crane was designed with the ever larger offshore wind energy farms in mind as well as the trend of dismantling disused offshore oil and gas platforms from which large and heavy parts have to be disassembled in open seas.

In early April 2021, it became clear Gdańsk Remontowa Shiprepair Yard was contracted to repair the damages on board the vessel itself.