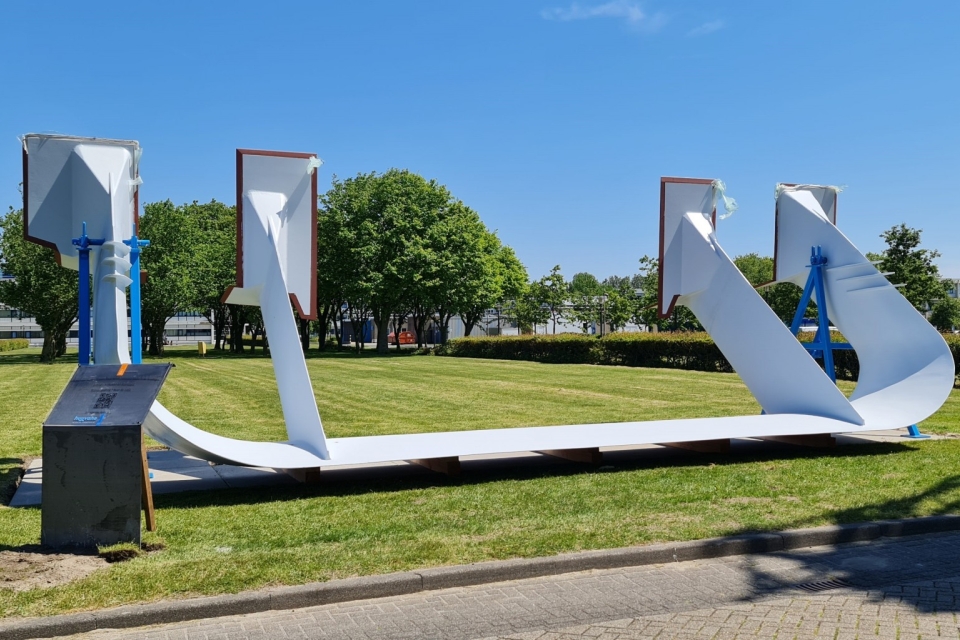 The first Hull Vane for the Royal Netherlands Navy has been delivered in Den Helder. This Dutch invention of the company bearing the same name consists of a submerged transom wing that improves efficiency and seakeeping while reducing noise. This Hull Vane will be installed in early 2023 on the aft ship of HNLMS Groningen.

It all started with a presentation of a paper in Washington D.C. back in 2015. Hull Vane BV, the Wageningen-based company with exclusive rights to the patented invention, had calculated that their submerged wing could reduce annual fuel costs by thirteen per cent on HNLMS Groningen, a 108-metre ocean-going patrol vessel of the Holland Class. After this study, interest was raised at the Defence Materiel Organisation (DMO), a division of the Dutch Ministry of Defence (MOD).

Further research work was done to increase the performance, and to ensure the structural integrity during the integration. The main objective was to optimise sailing characteristics, while maximising operability. These studies were carried out for DMO and financed by “MIND”, short for “Military Innovation by Doing”.

It is quite uncommon for the Dutch Ministry of Defence to do business directly with small enterprises, but it is becoming more frequent. That is why the term “Golden Triangle”, which refers to the MOD, industry and knowledge institutes, is making way for the term “Golden Ecosystem”. Innovations often come to the surface in small companies, and with this approach they can be implemented faster.

Hull Vane is a Dutch invention, and a great example of how MIND has introduced innovations within the MOD.

After the performance optimisation and structural integration study, MIND gave the order for the structural design and build. As a result, the largest and heaviest Hull Vane ever built was handed over on 8 June.

‘Now, more than forty Hull Vanes are in use,’ says Niels Moerke, managing director at Hull Vane BV. ‘Hull Vane is a proven technology on a variety of ship types. However, the MOD is of particular importance to us. On the one hand, it is by far the largest Hull Vane we have ever built, and on the other, it is the first one to be installed on a naval ship.’

He adds: ‘We also love that it is a Dutch naval ship. Hull Vane works great on this kind of ship, and provides a number of benefits. Maximum performance and employability were the goal, but we have had to comply with a number of additional requirements. Fortunately, we have proven to be able to fulfil these. It was a learning process for us, but together with the team of DMO we have come out stronger. We are also aware that foreign navies are following this project with a keen interest and the intention to follow the Dutch Navy.’

Isn’t such a vessel much too heavy to benefit from a submerged wing? Bruno Bouckaert, sales director of Hull Vane BV: ‘This ship cannot be lifted out of the water with a wing, she is way too heavy for that. However, the Hull Vane works in a completely different way than conventional hydrofoils. The purpose of the Hull Vane is not to lift the ship out of the water, but to generate a propulsive force and to reduce the wake. When a ship makes less waves, it is more efficient. What we love most about hydrodynamics is that efficiency is so visible. You can really see it (and hear it) when a ship is sailing more efficiently.’

Besides energy saving, which automatically leads to a reduction of CO2 emissions, the Hull Vane also offers many tactical advantages for the ship. Due to the suppressed stern wave, the vessel leaves much less visible wake, making it less visible to satellites, drones and even certain types of torpedoes.

Helicopter landings will be safer in rough weather, and it is expected that the slipway in the stern can be used more frequently to launch and recover the FRISC, a fast daughter craft. The ship will have a higher top speed, and will be able to cross a long distance faster, for example when being deployed for calamities.

But above anything else, the goal is to reduce the dependency on diesel fuel. That is valuable in peace time, but even more so during war.

Picture: The Hull Vane will be installed in early 2023.