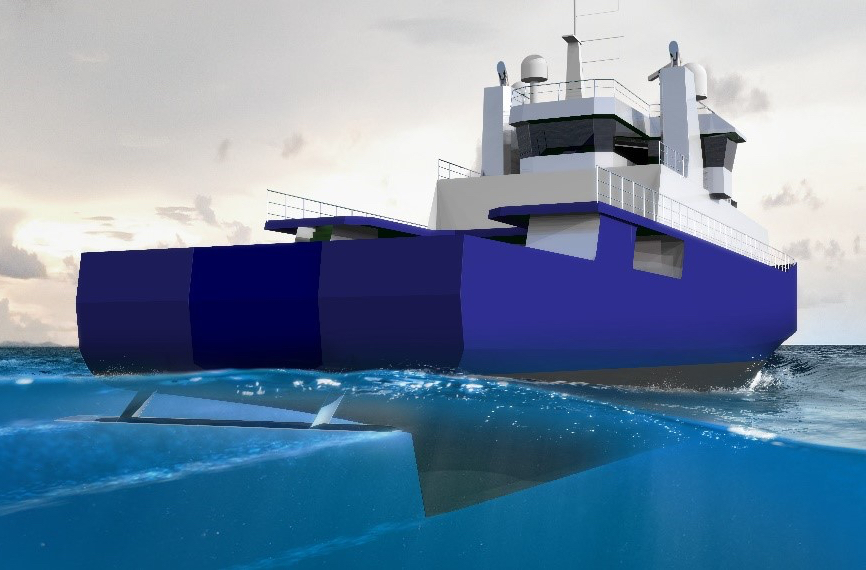 Earlier this year, Hvide Sande Shipyard in Denmark won a public tender for the design and construction of a new 64-metre offshore patrol vessel. As the lifecycle costs and seakeeping characteristics are very important for this vessel, the shipyard worked with Hull Vane in the Netherlands during the bid phase.

Hull Vane is a patented hydrodynamic appendage which converts energy from the stern wave and of the ship motions into forward thrust. Computational Fluid Dynamics (CFD) analyses on the hull for the offshore patrol vessel (OPV) showed that it would reduce resistance at all speeds (>seven per cent). Based on this preliminary analysis, Hvide Sande decided to integrate Hull Vane in the bid as an integral part of the design.

Following the order for the vessel, the yard commissioned Hull Vane to fully optimise the Hull Vane, which was done with CFD using the AMPO-RAGEC method (Automated Multi-Parameter Optimisation through Randomised Geometry Creation). The naval architects of Polarkonsult, Norway, then further optimised the aft and fore ship to reach the best possible overall hull efficiency, taking into account the effect of the Hull Vane.

As the vessel will consume most fuel over the year at 14 knots, this was the focus speed for the optimisation, and the performance was also checked at 10 knots and the top speed of 17.5 knots. At all speeds, the total obtained resistance reduction is in excess of ten per cent, peaking at over fifteen per cent at 14 knots. The Hull Vane works essentially by converting stern wave energy into forward thrust, and this effect is clearly visible in the reduction of stern wave, according to Hull Vane, see the picture below.

The OPV will have a stern ramp to launch a daughter craft by means of a slide-out cradle. Model tests on another OPV have shown that the dampening of the motions from the Hull Vane, particularly in the aft ship, will be very beneficial for the launch and recovery of the daughter craft. The reduction of wake also improves the manoeuvre.

As there will be almost no “reverse wake” pushing the daughter craft forward, launch and recovery can be done at higher speeds. The seakeeping benefits of the Hull Vane will be particularly beneficial for the OPV, as it will spend most of its time in the rough North Sea. The Hull Vane dampens the pitching motions and reduces bow slamming.

Construction of the Hull Vane will start shortly, for a delivery in 2021. It is the 41st Hull Vane to be ordered, and the fifteenth for a patrol vessel.