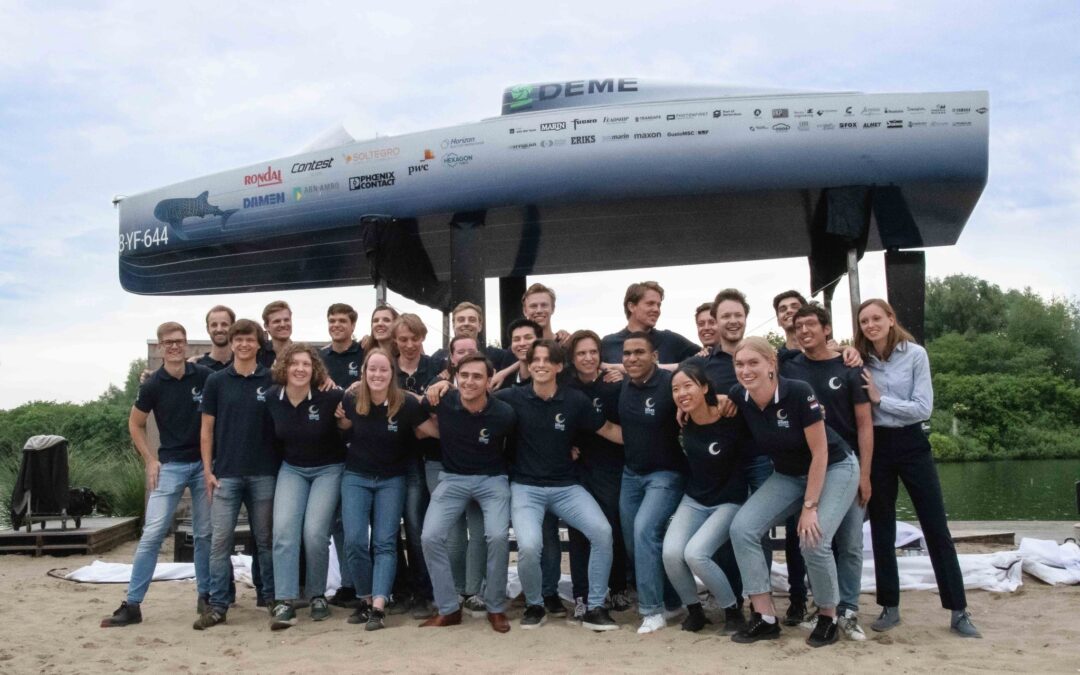 After one year’s endeavour, 300+ hours of making parts behind the machines, 9000+ lines of coding, and ten weeks of laying the carbon fibre, Delft University of Technology’s (TU Delft’s) Hydro Motion Team finally finished its new “flying” hydrogen boat. It is the first seaworthy monohull boat of the Team.

The boat that is equipped with hydrofoils to lift it out of the water was revealed on 23 May at Lake7 in Zevenhuizen, the Netherlands. TU Delft has been building boats sailing on solar energy for fifteen years. In 2020 the team took the big next step towards a sustainable maritime industry by starting a new project; the Hydro Motion project. The team the built the world’s first flying hydrogen boat.

This year, the TU Delft Hydro Motion Team continued exploring the potential of hydrogen and improved the design and built a new hydrogen-powered boat that will be tested and compete in a race. The goal is to inspire the entire maritime industry by showing what is possible with hydrogen.

There are several options to generate green electricity. These include wind and solar generated energy. To come full circle, the TU Delft team decided to not just look at the supply side of the chain, but to also pay attention to the way this energy is stored.
TU Delft Hydro Motion Team: ‘Right now, the industry tends towards the usage of chemical cells when it comes to storing energy and powering electric transport. However, this is only part of the solution to reducing carbon emissions in the transport industry, because different applications require different solutions and the demand of lithium is growing faster than the supply can satisfy.’

That is why the team decided to store green energy in hydrogen. Using hydrogen as an energy carrier has the benefit that it doesn’t produce greenhouse gas emissions when used to generate electricity. On top of that hydrogen – when converted by fuel cells – has an energy storage density approximately 235 times larger compared to industry standard lithium-ion battery cells. This is a huge advantage when it comes to powering a vessel, according to the team.

This year, the Hydro Motion Team will compete in the Open Sea Class of the Monaco Energy Boat Challenge to prove the power of hydrogen. Last year, the experimental “flying” hydrogen boat had to give up racing during this race after suffering major damage to its electrical systems during a training session. The damage proved too severe to repair in time for the race.