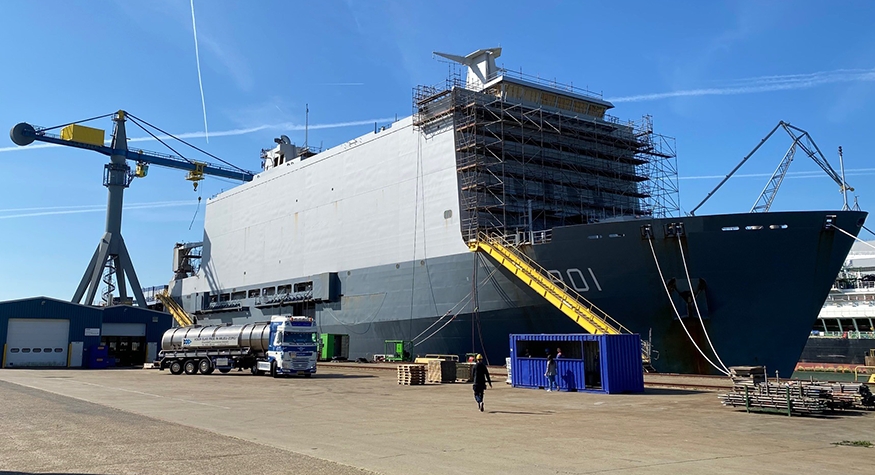 RH Marine has started with a system upgrade and regular maintenance of HNLMS Johan de Witt, the amphibious transport ship of the Royal Netherlands Navy. All navigation, communication and control systems on board will be renewed and all electrical components will be inspected and replaced if necessary.

RH Marine is collaborating with Damen Naval, who is giving the naval vessel, also known as a Landing Platform Dock (LPD), a mid-life upgrade at its shipyard in Vlissingen, combined with a general overhaul. RH Marine and Damen Naval also collaborated on the construction of HNLMS Johan de Witt between 2003 and 2007.

All these systems are now being renewed according to the latest state-of-the-art. The IPMS and IBMS were assembled in RH Marine’s own workshop in Schiedam. The software automation and communication protocols have been extensively tested for readiness.

RH Marine has been designing all the new systems for two years now. Work on board started at the beginning of March. In the first months, the old equipment is dismantled and removed. The ship’s cabling is also removed. As part of the maintenance, the current distributors, sensors, and other parts are inspected and replaced if necessary.

The operational areas, including the bridge, technical centre, and command centre will be redesigned. For this, sixty new consoles have been designed in collaboration with TNO. These prefab-built consoles and other equipment are ready to be built into the ship.

Landing and amphibious transport vessel in one

As an LPD, the most important task of HNLMS Johan de Witt is supporting amphibious operations at the border of land and water. The vessel can bring personnel and goods ashore without a port. In addition, the vessel can serve as a sailing command centre for directing large-scale amphibious and maritime operations.

HNLMS Johan de Witt is now fifteen years old. Hence, it gets a standard upgrade and the main equipment is renewed. At the same time, major maintenance is carried out, which is required after the fifteenth year of life.

‘As one of the leading system integrators on the defence market, we develop and install electrical and automation systems for almost all Dutch naval vessels,’ says project leader Jos Geerdes of RH Marine.