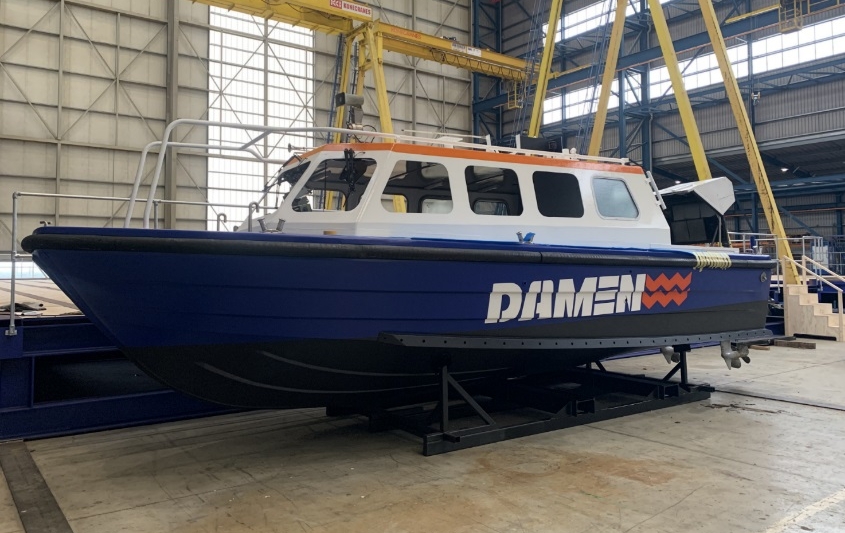 After the start of the Field Lab Autonomous Sailing Technology (F.A.S.T.) project at Damen Naval last month, the team is currently preparing for the official kick-off in Vlissingen’s inner harbour. Today, a nine-metre long former patrol boat will start the unmanned sailing experiment.

From the 17th of November on, the converted former patrol boat, originally built at Damen Hardinxveld, will perform all kinds of manoeuvres on the water without the need for a helmsman. Engineers from Damen Naval and its partners in this experiment: TU Delft, the University of Applied Sciences in Vlissingen, and the Rotterdam company Captain AI (Artificial Intelligence), will operate the small boat, which is equipped with electric motors, from the shore using a computer. For the test, the vessel has been equipped with cameras that can map its surroundings in 360 degrees.

The experiment has been made possible by a grant from the European Commission from a fund for technological developments in the field of sustainability and digitalisation. Damen Naval is acting as project leader of the Field Lab. In addition to the companies and organisations mentioned above, the Municipality of Vlissingen and the Zeeland Provincial Government support the initiative.

The F.A.S.T. project is an innovative partnership that realises open innovation projects involving the tourism and logistics sectors, technology providers, knowledge institutes and governments. Such collaborations will be jointly innovating and experimenting on the subject of autonomous sailing over the next two and a half years. Cooperation on this subject within such a broad consortium is unique and has never been done before in the Netherlands.

The Field Lab focuses on a wide range of applications for autonomous sailing and the technological and operational innovations it requires. Applications include autonomous ferry services within the transport network of Zeeland, autonomous maritime recreation, and autonomous freight transport in the nearby ports of Vlissingen and Terneuzen. The aim is to increase the technological lead, knowledge, safety and economic impact within multiple sectors in the region. The Field Lab Autonomous Sailing is therefore a direct asset to the region of Zeeland and the city of Vlissingen.

Also read: Uncrewed surface vessel to sail to the North Sea from Rotterdam for the first time