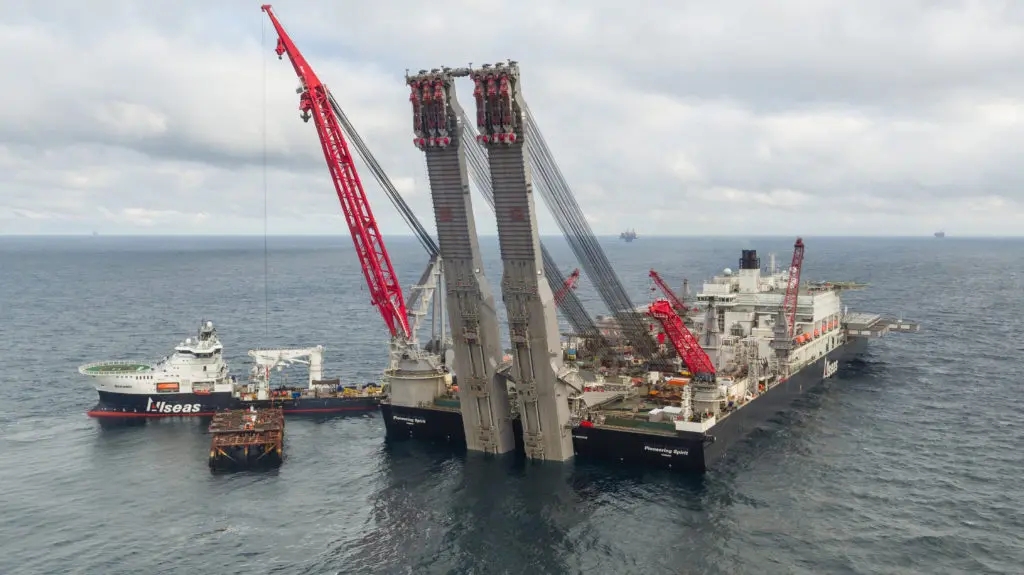 Weighing in at 8100 tonnes, the first commercial lift with Allseas’ new jacket lift technology on board offshore giant Pioneering Spirit is one of the heaviest offshore jacket lifts ever, but is well within the system’s 20,000-tonne capacity. The company has now released a video of the project.

Allseas’ Pioneering Spirit deployed its revolutionary jacket lift system for the first time on 21 April to remove CNR International’s Ninian Northern jacket from the northern North Sea. This removal marked the climax of years of design, engineering and construction of the new jacket lift system.

Pioneering Spirit arrived in the Ninian field, 160 km northeast of the Shetland Islands, on 14 April. After final preparations including cuts through the eight legs, the jacket lift system (JLS) was engaged to lift the jacket safely out of the water.

Main hoist blocks suspended from the JLS beams were attached to the jacket top by means of bespoke rigging (built by Allseas Fabrication) and, after final cuts, the 85-metre structure lifted safely out of the water. The jacket was subsequently aligned with the beams and lowered onto the main aft deck for transit to the Shetlands.

Fundamentally different to conventional crane-lifting vessels, the aft-mounted system comprises two connected 170-metre-long beams that lift and support jackets of all sizes during removal and installation operations. The system also enables the transport of jackets in a near-vertical position to safeguard structure integrity.

This advanced technology enables direct transfer of structures to and from the quayside and eliminates the need for support barges. There is no need to seafasten the jacket to the beams during transit due to the vessel’s high level of stability, significantly reducing time in the field and lowering the emissions footprint.

Ninian Northern is the first of several major jacket removal and installation commitments for Pioneering Spirit in 2022. The vessel will lift and transport more than 123,000 tonnes of structures for the offshore energy industry this year utilising both its jacket lift and motion-compensated topsides lift systems.