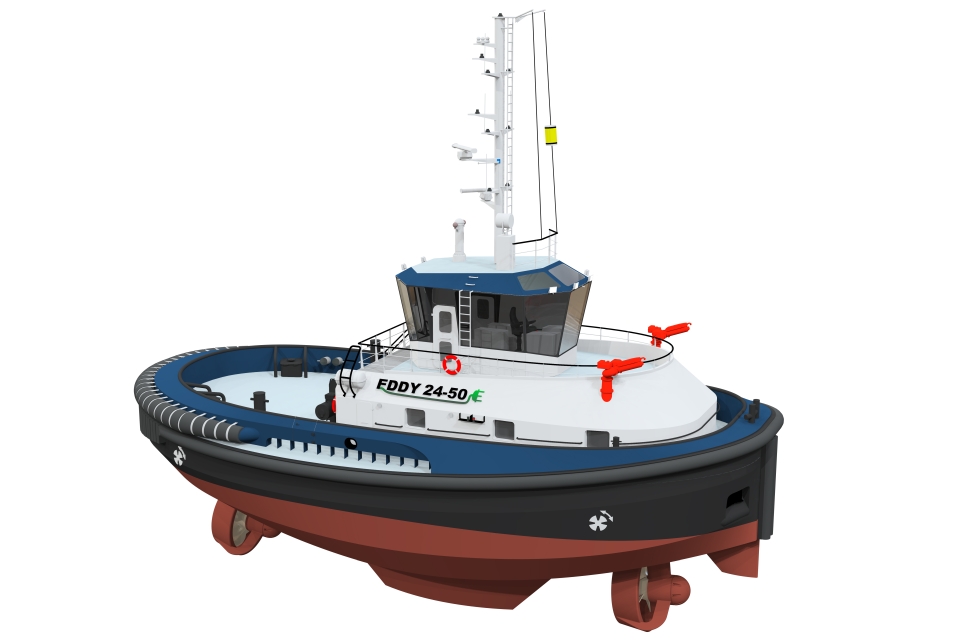 As tugs operate daily in busy ports, making green operations possible with a fully electric harbour tug is only logical. Holland Shipyards Group has developed the Eddy 24-50 E, which is in line with the previously developed revolutionary Eddy tug series. The Eddy tugs are designed and built around three simple core criteria: safety, performance and economy.

Eddy tugs have a slim hull shape, resulting in thirty per cent lower resistance. Compared to ASD, ATD and RSD tugs, it is said to offer higher stability, safer operations and better performance due to its low staple point and low centre of gravity.

For optimum escort tug performance, the Eddy’s waterline shape is a winged profile, allowing the vessel to generate lift with the hull and thus generate most escort forces. It sails intuitively and can generate BP in 360 degrees, featuring a thruster at the forward end of the vessel and a thruster aft.

Emission-free operations are not only a great way to work on sustainability, but it also has economic advantages. The OPEX will be significantly reduced over time. This is mainly due to maintenance and fuel and emission savings. All in all, Holland Shipyards estimates the return on investment to be seven years.

Onshore charging systems have developed rapidly and are based on the vessel’s operational profile. Charging the batteries can be done in a few minutes, several times a day, or once a day over a longer period. This all depends on the operational profile.

The electrification of harbour tugs is particularly interesting given that they usually operate in the same area, and charging systems are easily accessible to them.

Holland Shipyards has delivered more than a dozen electric vessels over the past two years, particularly in Norway, Germany and the Netherlands. Most of these vessels are fully electric, such as the recent NZK series for GVB Amsterdam with an innovative shore charging system.