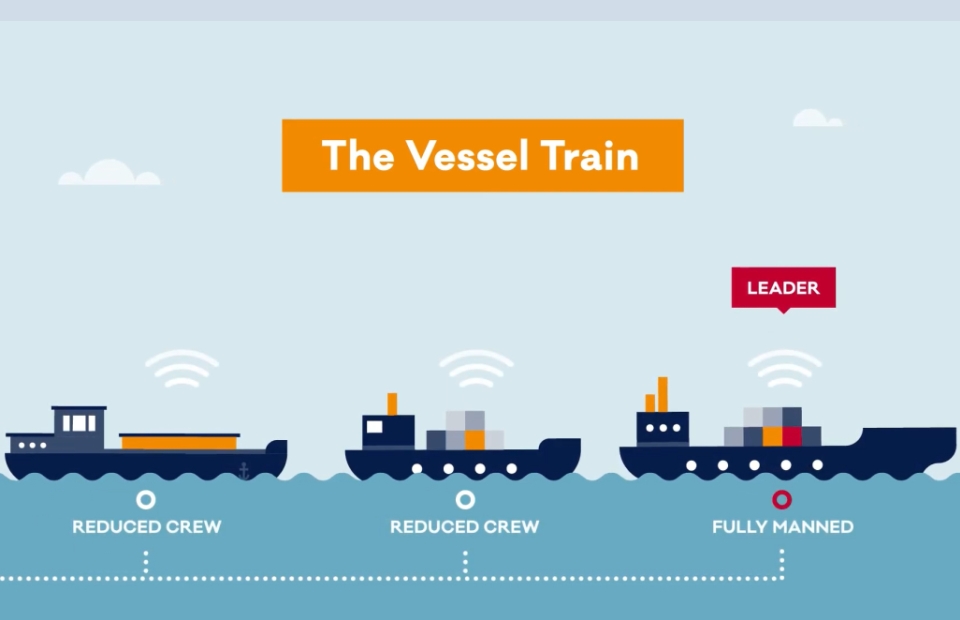 The European Commission has recently made more policies for logistical improvement in international inland navigation. Under the umbrella of NOVIMAR (NOVel Iwt and MARitime transport concepts) project partners aim to improve economic feasibility of waterborne transportation by introducing the concept of the vessel train.

Project NOVIMAR has received funding from the European Union’s Horizon 2020 research and innovation programme under grant agreement No. 723009. The project started with 22 partners from nine countries that together want to further develop the concept of vessel platooning. The project ran from the 1st June 2017 to the 1st June 2021.

The stakeholders together possess the necessary expertise to achieve innovation and the expected breakthrough in inland waterborne transport (IWT) performance.

IWT is a major key-holder for unlocking congestion in seaports, at terminals, on road networks and access to urban areas, besides being a main factor in reducing CO2 emissions in transport. These advantages, however, are not fully exploited due to inefficiencies in the seaport-inland logistics chain. Think of containers and vessels that are not loaded to their full capacities resulting in a sub-optimal use of IWT capacity.

Intercontinental and intra-continental cargo (containers) designated for IWT are not yet delivered in large packages, which results in inland ships having to call at many (six to eight) terminals to collect a few containers with waiting time at and sailing time between terminals adding-up to sixty per cent of the total time spent in port.

Therefore, the core NOVIMAR challenge was: where, how and with whom to intervene in the logistics system to obtain the largest possible impact at the lowest possible cost?

There were three main problems:

The project partners in NOVIMAR came up with six main ideas to solve the three problems mentioned above:

Delft University of Technology is moving from paper to practice by taking NOVIMAR vessel concepts that add buoyancy to inland vessels to the next level. Several concepts are currently being researched with the aim to develop solutions for the inland waterway transportation sector to deal with reoccurring low water levels.

Performing these simulated runs in the laboratory, the computer simulation software, developed at MARIN within this very same H2020 innovation project, can be adequately validated.

The vessel train concept and design objectives and approach are:

The vessel train may be used in inland navigation (CEMT class Va and III), sea-river and short-sea shipping and can also use the RoRo technology in container handling.

The research has resulted in the following ship design: a NOVIMAR Class Va inland container RoRo vessel with a regular draught. This vessel could look as portrayed below.

One of the research routes within NOVIMAR is the “Vessel train”. In this concept, inland navigation is further developed using the technology of autonomous sailing. The first ship is the “leader” of the convoy. This ship is fully manned and transmits the necessary nautical digital signals to the following ships in the convoy. The following ships have a strongly reduced crew on board.

This article is based on information of the EU and the EICB (Expertise- en InnovatieCentrum Binnenvaart) Rotterdam.

Picture (top): In a vessel train, only the leader is fully manned.