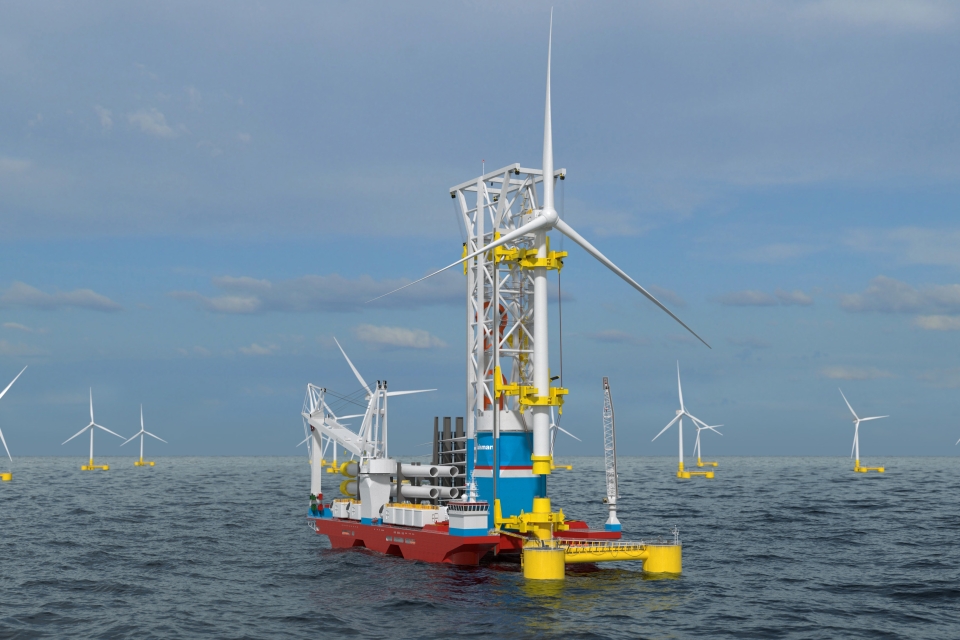 Advertorial – Huisman has developed the Windfarm Installation Vessel (WIV) for floating installation of next generation offshore wind turbines and monopile foundations. This design offers an alternative to current installation methods. With the WIV, Huisman offers a solution for improving safety and workability, and reducing costs. The Huisman WIV will give a twenty to forty per cent reduction on the installation cost per turbine and a significant quicker return on investment.

Over ten years ago, Huisman from Schiedam, the Netherlands, started thinking about an alternative for the installation of wind turbines offshore. Jack-ups have their limitations in the amount of payload, water depths and lose time in jacking up and down within a small weather window.

Huisman also saw opportunities for improving safety in the offshore wind industry, building on its experience in the heavy lifting and oil and gas industries This involves assembling wind turbine parts onshore so far as possible, limiting the number of lifting operations, controlled lifting (no swinging loads) and robotics.

Around twenty years ago The number of personnel injuries was quite high in the drilling industry. This was mainly caused by the number of unprotected rotating machine parts and the handling of chains and slings to couple and uncouple casing and drill pipe. Huisman developed the Huisman Innovation Tower (HIT) which is highly automated and requires no personnel on the drill floor during drilling. This significantly improves safety and increases the speed of operations.

Disruptive changes were also seen in the heavy lifting industry in the seventies and eighties when heavy lifting was done by monohulls and sheerlegs until Heerema commissioned the world’s first semi-submersible crane vessels, Hermod and Balder. They brought an innovative dual-crane feature to the market and suddenly installations that previously required an entire summer to complete could now be ready in a few weeks.

Now is the time to do something similar in the offshore wind industry.

When the development of the WIV started, some ten years ago, a large offshore wind turbine was 5 MW. Then the philosophy was to assemble the wind turbine completely onshore in big ports. A fast SWATH (Small Waterplane Twin Hull) vessel would transport the fully assembled wind turbine to the offshore location and land it in a single lift on a foundation, which typically sticks out 15-20 metres above sea level.

The Huisman installation tower has multiple motion compensated grippers (in X- Y- and Z- directions) holding the wind turbine and compensating for the vessel motions. The method saves costs, as the assembly time offshore is much shorter and reduces the incident rate and damage to the equipment.

In a short period, the size of the wind turbines has grown from 5 MW. It is currently planned to increase the size up to 15-20 MW. The length of the blades will grow from 65 to 130 metres. With this increase in scale, multiple marshalling ports with large cranes and quay sides are needed, which will result in high infrastructure costs. Also, the possibility to transit with fully assembled wind turbines from port to site is becoming more challenging due the permitted accelerations in the nacelle and increasing distance between the port and the offshore wind farm.

Therefore, Huisman developed a solution where the turbines are assembled on the deck of the vessel before being lifted onto the foundation in, again, a single lift. The relatively small SWATH vessel concept has grown to a semi-submersible vessel design with an overall length of 240 metres and a width of 88 metres. The beam is important as there are few drydocks in the world that can accommodate vessels with these dimensions.

The WIV has a hybrid power system, consisting of dual fuel generators, with a total installed power of 48 MW, and an energy storage system. The WIV has eight azimuthing thrusters, each with a power of 5.5 MW. Thrusters are controlled by a DP3 system. It is planned to use methanol as a fuel. The vessel features accommodation for 200 persons, all in the deck box, keeping as much as possible free deck space.

The Windfarm Installation Vessel is designed for the following operations:

The installation procedure will look as follows:

During the installation process cargo (foundations, masts, nacelles and blades) can be loaded onto the WIV utilizing the 3000-tonne knuckle boom crane without interfering with other operations.

Comparison between the conventional method of installation and the Huisman WIV method: