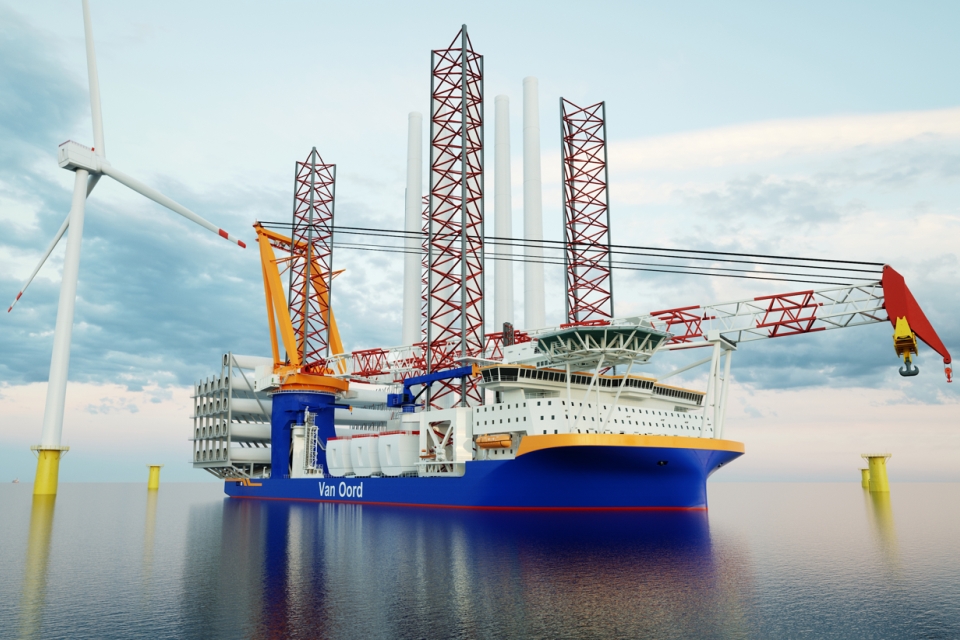 Van Oord’s new wind turbine installation vessel (WTIV) Boreas will be powered by five Wärtsilä 32 dual-fuel methanol generators. It is the first time Wärtsilä supplies methanol engines for a newbuild project. Schiedam based Huisman will construct a Leg Encircling Crane (LEC) with a lifting capacity of more than 3000 tonnes for the vessel. It is the crane builder’s largest of this type to date.

This article was written by Hans Heynen (pictured), maritime journalist, and was originally published in SWZ|Maritime’s March 2022 issue. Subscribers can read the March issue in our Archive now. Not yet a subscriber? Please visit our subscriptions page.

The Chinese Yantai CIMC Raffles Shipyard will build Van Oord’s 175-metre-long and over 60-metre-wide lift installation vessel. The Danish naval architects of Knud E. Hansen designed the self-elevating installation vessel, which is optimised for the installation of a new generation of 20 MW wind turbines, with a diameter of 260 metres. The 130-metre-long blades of these turbines will reach 300 metres above the waterline.

The self-elevating installation vessel gets four 126-metre-long legs. They can lift the ship in water depths of up to 70 metres. Huisman Schiedam will design and build the giant Leg Encircling Crane (LEC) needed to install the giant wind turbines.

The Boreas will have 88 per cent more deck space and eighty per cent more lifting capacity than the installation vessel Aeolus, which was built for Van Oord in 2014. The Aeolus can operate in water depths of up to 45 metres.

The five medium-speed dual-fuel methanol engines in the “methanol-electric” Boreas will have different power ratings. ‘We have opted for different versions with different numbers of cylinders,’ says Van Oord spokeswoman Marjolein Boer.

The Wärtsilä 32DF methanol engines are available in versions from six to sixteen cylinders, with power ratings from 3480 to 9280 kW at 750 rpm. ‘The methanol is injected according to the diesel principle,’ explains spokesman Serge van der Veere of Wärtsilä. The system was first used by Wärtsilä during a refit in 2015 on the ferry Stena Germanica, built in 2002. Between 2015 and 2017, the four existing Sulzer 8ZAL 40S diesel engines of this ship were converted into dual-fuel methanol engines.

The new methanol engines have variable valve timing. This makes it possible to close the intake valves earlier under heavy load, to further reduce NOX formation during combustion (Miller timing). When the engines are running at low load conditions, the intake valves close later to optimise combustion.

Although the NOX emissions from the methanol engines are about sixty per cent lower than those of diesel engines (without after treatment), they will be equipped with selective catalytic reduction (SCR) converters to reduce the remaining NOX emissions to a minimum. This also means that they can meet the IMO Tier III emission standards when fully sailing on marine diesel fuel.

Methanol has the lowest carbon and highest hydrogen content of any liquid fuel. Even when methanol is made from natural gas (grey methanol), the CO2 emissions are lower than those of diesel. When green methanol is used, the ship will sail almost CO2 neutral. Green methanol can be made from biological residues (bio-methanol) or from hydrogen and CO2 with green electricity (e-methanol).

Van Oord plans to install a supportive lithium-ion battery pack with a capacity of 5000 kWh on the installation vessel. It will reduce the amount of generators needed at the same time during operations. The battery pack adds power to the system during peak loads and absorbs generator power when loads are low. This “peak-shaving” makes it possible to load the generators optimally. This should reduce consumption of the expensive methanol.

‘The ship will also be able to sail on batteries alone for quite some time,’ adds Boer.

Van Oord expects that bunkering methanol will be possible in more and more places in the near future. ‘We assume that this market will develop further in the coming years. We are in contact with various suppliers and were approached by additional parties after Wärtsilä’s press release,’ says Boer. When no methanol is available, the engines can switch to marine diesel oil. Clients will have influence on the fuel used during a project.

Huisman will construct a Leg Encircling Crane (LEC) with a lifting capacity of more than 3000 tonnes. The crane will be built around the starboard rear leg of the vessel. It will look as if this leg protrudes through the crane base. This type of crane can rotate freely around the leg.

A slewing bearing system, developed by Huisman, enables a very accurate and reliable positioning of the crane. A smart construction makes it possible to have a relatively light boom with a great rigidity. It will be the largest LEC ever built.

In 2014, Huisman deliverded the 1600-tonne LEC crane for Van Oord’s Aeolus. ‘With this new order, we can continue to develop this successful product with new technical solutions,’ says CEO David Roodenburg from Huisman.

The fully electrically powered crane will be delivered in 2023 and will be integrated into the vessel at the Raffles Shipyard. This is done in close collaboration with the ship’s designer, Knud E. Hansen.

‘With this investment, we are prepared for the increase in scale in the offshore wind industry. It makes it possible to maintain our leading position in this area,’ states Van Oord’s general manager Pieter van Oord. ‘This Huisman crane helps us to achieve this goal.’

On the wide stern of the installation vessel is space for the vertical storage of foundation piles for the wind turbines. The turbine towers will be carried upright on port side. The ship is expected to be delivered in 2024 and will be brought under the Dutch flag. Van Oord has taken an option on a second ship of this type.

The family business Van Oord aims to be climate neutral by 2050. Ships sailing on methanol will play an important role in achieving this goal. A few years ago, Van Oord ordered three LNG powered trailing suction hopper dredgers. They will be launched this year. ‘A number of existing ships will also be made more sustainable in the coming years. Methanol will also play a role in that,’ says Boer.