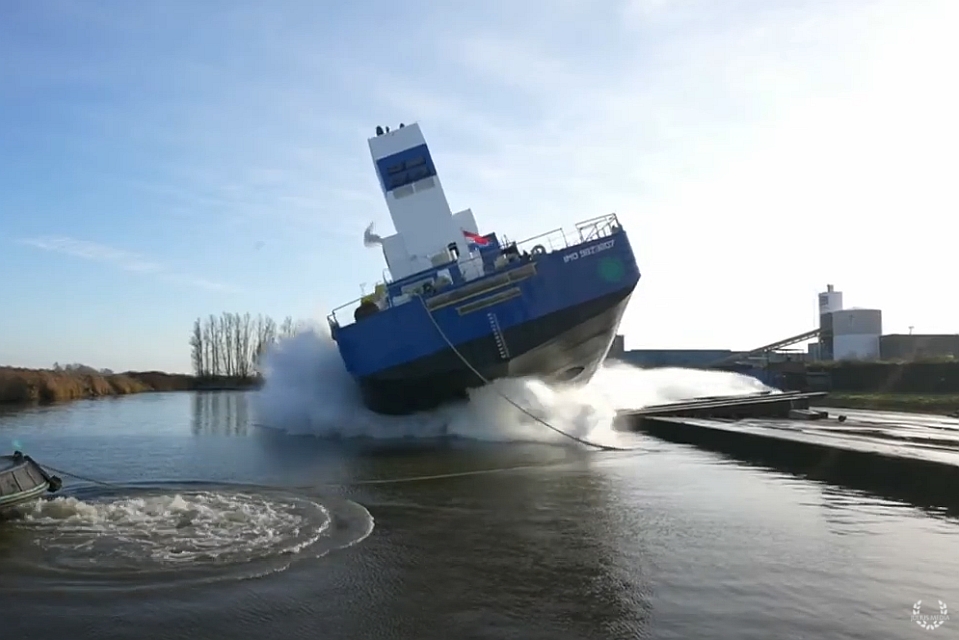 Thecla Bodewes Shipyards launched the second trailing suction hopper dredger, BN348, for De Hoop Terneuzen in Kampen on 7 December. The vessel is designed to dredge sand and gravel up to a depth of 60 metres and is a sister vessel of the Anchorage, delivered to De Hoop in June 2020.

Both dredgers were originally ordered with Barkmeijer Stroobos in February 2017 by Hanson Aggregates Marine Ltd., Maidenhead. However, in October 2018, the yard was declared bankrupt. In January 2019, Thecla Bodewes Shipyards took over Barkmeijer and construction of the Anchorage continued for a new client, De Hoop Terneuzen, a family owned company and major supplier of building materials in Holland and Belgium.

De Hoop later decided to also purchase the second dredger and construction now nearing completion with the launch on 7 December.

Also read: Barkmeijer delivers the Anchorage – a closer look at the dredger’s design

Conoship International provided the naval architecture (hull design and stability calculations) of the trailing suction hopper dredgers. The hull shape is optimised for sailing at both loaded and unloaded draught by Computational Fluid Dynamics (CFD) calculation.

The design brief for the dredger was rather comprehensive. Without limits to the navigation area, the design had to be able to dredge sand and gravel up to a depth of 60 metres, screening this to the required grain size and dry discharge to shore in ports with a great variety in receiving facilities. The dredger’s design is characterised by a high freeboard for operations at the high seas. They don’t have bottom doors, as they are unloaded ashore.

The dredger is equipped with a smart diesel-electric system, developed in close co-operation between Barkmeijer Shipyards and D&A Electric, Ridderkerk, that efficiently regulates the energy supply for sailing, dredging and unloading the vessel.

With an underwater pump in the suction pipe with a diameter of 700 mm, sand or gravel is suctioned up to a depth of 60 metres from the seabed and the sand or gravel/water mixture is pressed into the hopper. The water is pumped out of the sand or gravel during the voyage to the discharge port so that the cargo can be unloaded dry with a grab crane installed on board. On board is accommodation for a crew of fourteen people.

Watch a video of the launch of BN348 below (launch at around 58:25). The picture above is a still from the same video.