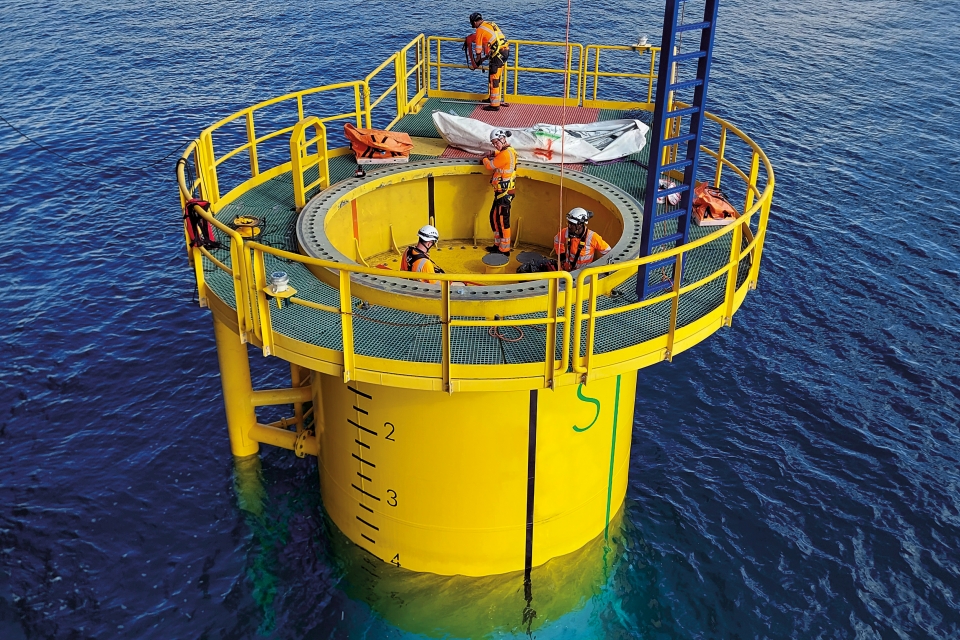 After a EUR 33 million profit in 2020, dredging and offshore contractor Van Oord suffered a EUR 62 million loss over 2021. This is mainly due to large loss provisions taken on three projects in the business units Netherlands and Offshore Wind: the Afsluitdijk project in the Netherlands, the Saint-Brieuc project in France and the Greater Changhua project in Taiwan.

Van Oord says 2021 was difficult due to Covid-19, market and supply chain issues and operational challenges. On the other hand, the company is optimistic about the future as it now has a record-high order book and there is a positive outlook for all its markets.

CEO Pieter van Oord says he is optimistic about the long-term outlook and expects revenues to increase and margins to improve in 2022. He adds that ‘profitability will also depend on the settlement of larger claim positions during the year. We expect our order book to further develop positively, reflecting the outlook of our markets’ but that the outlook also depends on the crisis in Ukraine. ‘Geopolitical uncertainties, inflation, and supply chain issues could have a large impact on our performance. But our company is resilient and financially healthy.’

The preparations for Van Oord’s annual report started before Russia invaded Ukraine. At this point, Van Oord says it is unable to fully foresee the impact on its organisation. The contractor does intend to bring its current activities in Russia to a halt in a controlled way and does not plan to undertake any future business in Russia.

In 2020, the company invested EUR 1 billion in innovative and sustainable equipment over five years so as to strengthen its role in offshore renewable energy. EUR 208 million was invested in tangible fixed assets in 2021. Net investment was lower at EUR 98 million (2020: EUR 120 million), driven mainly by the sale of Van Oord’s share in the Blauwwind offshore wind farm.

In 2021, two new hybrid water injection dredgers (WIDs) Maas and Mersey were put into service in the summer of 2021, replacing the first generation of WIDs.

For the offshore wind market, Van Oord ordered a new cable-laying vessel named Calypso and a new jack-up vessel, called the Boreas. The first will be capable of laying AC and HVDC cables and is expected to be fully operational by 2023. The Boreas will be capable of transporting and installing the next generation of 25 MW wind turbines. It will be the largest of its kind and has been designed to operate on methanol fuel. It is expected to enter the market in 2024.

The investment in the Boreas is the largest capital expenditure for a vessel in Van Oord’s history. At year-end 2021, Van Oord’s total committed investment programme, covering all its business activities, has a value of EUR 800 million.

There was a healthy market recovery in the Dredging business unit in 2021. Revenue increased from EUR 598 million in 2020 to EUR 727 million in 2021. Fleet utilisation was nevertheless still low. The market picked up in the second half of the year. The results were satisfactory and significantly better than last year. A total of 84 projects were completed in 28 countries. Van Oord won a total of forty tenders for projects in, for example, the United Kingdom, India, Mexico, Kazakhstan, Brazil, Germany, Indonesia, the United Arab Emirates, Malaysia, Egypt, and Morocco.

Among the projects Van Oord is involved in are deepening and widening of the 62-kilometre-long channel from Świnoujście to Szczecin in Poland, protecting the Black Sea resort of Eforie in Romania from erosion by waves and the Fehmarn Belt Fixed Link between Denmark and Germany, which will be the world’s longest immersed road and rail tunnel once completed.

Nitrogen issues in the Netherlands and Afsluitdijk

There were financial setbacks on the Afsluitdijk project as well as on the A16 Rotterdam motorway project. Radical changes had to be made to the original design of the Afsluitdijk project, and on the A16 Rotterdam motorway project setbacks in construction of the tunnel and the crossing with the Rotte River, caused delays – all of which led to unforeseen costs. The losses incurred on these two Design, Build, Finance & Maintain contracts have had an impact on Van Oord’s view and policy on accepting major high-risk projects in the Netherlands. There should be a better balance between rewards and the risks involved, says the company.

Nevertheless, 2021 saw major setbacks on two projects within the business unit and so substantial provision had to be recognised. At the Saint-Brieuc project in France, Van Oord encountered unexpected deviating ground conditions and operational delays. With project restart begin 2022, the project is expected to be completed one year later than previously anticipated.

The Greater Changhua project in Taiwan was seriously hampered by Covid-19. Van Oord says it took all the necessary measures to safeguard the well-being of its crew, ensure that crew changes on vessels went smoothly and avoid supply chain problems.

The outlook for offshore wind remains promising, according to Van Oord. Its tender activities are at an all-time high, prompting Van Oord to revise its forecast figures for 2025 and 2030 upwards. In addition to projects in the traditional offshore region of North-West Europe, in 2021 the contractor also tendered for projects in the United States, Taiwan and Japan.

For the Offshore business unit’s Subsea Rock Installation activities, 2021 was a fickle year. In the first six months, there were difficult market conditions and the fleet was under-utilised during that period. But as market activity picked up in the second half of 2021, contracts did start coming in and filling the order book, states Van Oord. Ørsted awarded Van Oord a major cable stabilisation programme for a number of wind parks in the North Sea. As a result of this and other awards, the fleet was fully occupied for most of the second half of the year.

In the Middle East, the business unit Offshore carried out a series of trenching and backfilling jobs for the development of Saudi Aramco’s Berri Field and Qatar Gas’ North Field. The flexible fallpipe vessels Nordnes and Stornes performed work on multiple contracts under the framework agreement with Equinor. This includes work on the Askeladd, Johan Castberg, Johan Sverdrup and Snorre fields. The Nordnes was also deployed on the Hollandse Kust Zuid 1234 project, which involves the installation of scour protection at 140 locations, and cable crossing protection at 34 locations across the wind farm.

Van Oord has recently signed a large contract in Egypt for dredging the Ain Suhkna Port on the Red Sea. This new contract requires the deployment of self-propelled cutter suction dredgers and a fleet of sand carriers. The execution time is expected to be approximately two years.

Van Oord has also recently been awarded a turbine transport and installation project for the Aeolus on the East Coast of the United States for execution in 2023 – the first contract for Van Oord in the US. The country has the ambition to install 30 GW of offshore wind energy by 2030.