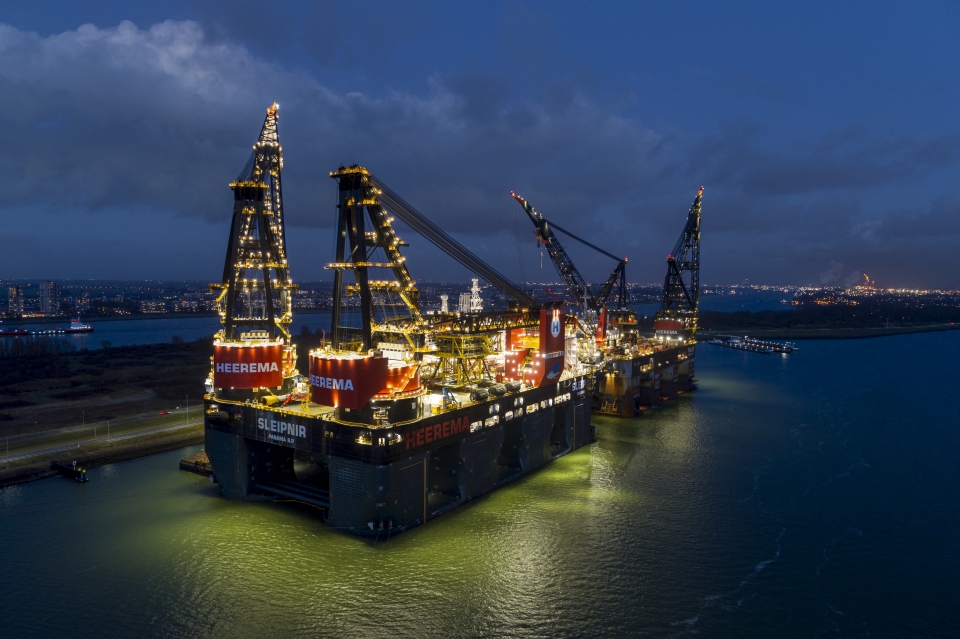 Heerema Marine Contractors’ largest crane vessels, the Sleipnir and Thialf, have officially switched from using their engines to using shore power while in port. The commissioning of the Shore Power project is the result of a partnership between Eneco, the Port of Rotterdam Authority, and Heerema with the support of the Municipality of Rotterdam.

Shore power enables vessels to switch off their engines and plug into the electrical grid for their energy supply. The connection built by Heerema, Eneco, and the Port of Rotterdam will supply Sleipnir and Thialf with sustainable energy that will originate from wind turbines located on the headland nearby or from another renewable source should it be required.

‘We are proud to successfully plug-in Heerema’s vessel to shore power,’ says Koos-Jan van Brouwershaven, Heerema’s CEO. ‘This project is the result of excellent collaboration and hard work from everyone involved. Heerema is committed to sustainability and we demonstrated this dedication by becoming carbon neutral in 2020. Each year from now to 2026, we have outlined our targeted emission reductions, and by plugging-in shore power we reduce our overall impact by five per cent, equivalent to 5000 diesel cars, which fulfills our first year’s target. We are looking forward to introducing more sustainability measures to continue this journey.’

In the video below, Brouwershaven explains more about the Shore Power project.

The shore power connection has a 20 MW capacity, which is the energy equivalent of around 15,000 homes. As the vessels turn off their engines when connected to shore power, virtually all emissions and particulate matter is prevented because no more marine gas oil or LNG in Sleipnir’s case will be used. This action has direct benefits for local residents with air quality improvements and a reduction in CO2. Also, without the engines running, there is a significant reduction in noise nuisance.

The installation at Heerema’s mooring location at the Calandkanaal was supported by the Municipality of Rotterdam using the Energy Transition Budget (€ 2 million).

Arno Bonte, Vice Mayor for Sustainability, Clean Air and Energy Transition of the City of Rotterdam: ‘Every year, about 30,000 ships visit the port of Rotterdam. Most of them still use diesel generators, which pollute the air and are a great source of noise nuisance to local residents. Shore power supplies green energy directly from the shore, which allows ships to switch off their diesel generators. That can save up to 25,000 liters of diesel per day per ship and therefore provides significant environmental benefits.’

At least ninety per cent of the offshore vessels, ferries, cruise, roll-on-roll-off and container ships in Rotterdam must use shore power by 2030. This saves the emission of approximately 200,000 tonnes of CO2 and 2500 tonnes of nitrogen. This means a major step towards an increasingly cleaner and future-proof port.

The Shore Power project first began in 2017, and since the idea was formed, the partners have been working together to achieve this sustainable ambition. There was an enormous amount of work that contributed to the successful commissioning of this project. With 16 km of cabling installed on board the vessels, the construction of an onshore E-house and over 40,000 working hours contributed to Shore Power.

‘It is unique that the power is provided by wind turbines just down the road,’ explains Frans van de Noort, Eneco’s Chief Operations Officer. ‘A truly sustainable way of powering vessels while in port. Collaboration with Heerema, the Municipality of Rotterdam, and the other partners have been key in the successful completion of this project and we are looking forward to further increasing shore power in the port of Rotterdam, through Rotterdam Shore Power BV, our joint venture company with the Port of Rotterdam Authority.’

Picture (top): Thialf and Sleipnir on shore power at the Calandkanaal (all pictures by Heerema).