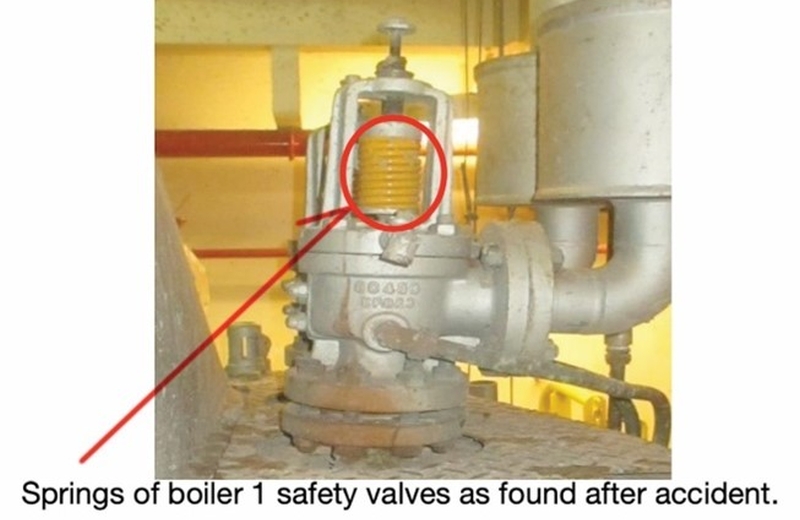 Annual servicing of a boiler on a drill ship has claimed three lives. The Nautical Institute describes the incident in its latest Mars Report and warns that competent supervision should be the norm as boilers are inherently very dangerous due to high operating temperatures and pressures.

A drill ship holding position offshore was due to carry out the annual servicing of its two auxiliary boilers. The boilers were used only for well test operations and had not been operated since the last annual service, except for maintenance operations.

The duty engineers brought the boilers up to temperature and pressure specifications in preparation for the annual checks. As this was underway, the pressure safety valves opened. They appeared to open at 1.9 bar for boiler 1 and 5.9 bar for boiler 2; well below the boilers’ working pressure of 7 bar. Over the course of the next four hours, the boilers were stopped and restarted a further three times. Each time, pressure safety valves operated at what appeared to be too low a pressure.

The next day, the service technicians resumed the work, together with one of the ship’s engineering personnel. The boilers were started and almost immediately triggered alarms on the machinery monitoring panel. Over the course of the next 36 minutes at least twenty alarms were acknowledged as the team struggled to find the problem.

Then, boiler 1 catastrophically failed from overpressure, filling the boiler compartment with steam. The two service technicians and ship’s second assistant engineer who were in the boiler room suffered lethal injuries. The weathertight door was blown open and the pressure vented to atmosphere, injuring another crewmember who was working nearby.

The investigation found, among other things, that the pressure sensors of boiler 1 were not operating as required and were giving false pressure readings. Yet the accuracy of the pressure sensors was never questioned as everyone believed they knew the problem; that the safety valves were opening below their set pressure. It is possible that this led to confirmation bias that then set the stage for the unsafe act of adjusting the safety valves to open under higher pressure.

Further, the service technicians’ lack of experience may have contributed to both the confirmation bias and the subsequent unsafe act. Adequate supervision by a qualified professional could have prevented this deviation from established safe practices.

Also read: Do you conduct a risk assessment before working on your ship’s boiler?

This accident was covered in the Mars Reports, originally published as Mars 202202, that are part of Report Number 351. A selection of this Report was also published in SWZ|Maritime’s February 2022 issue. The Nautical Institute compiles these reports to help prevent maritime accidents. That is why they are also published on SWZ|Maritime’s website.