Fire on board Euroferry Olympia under control, ten still missing 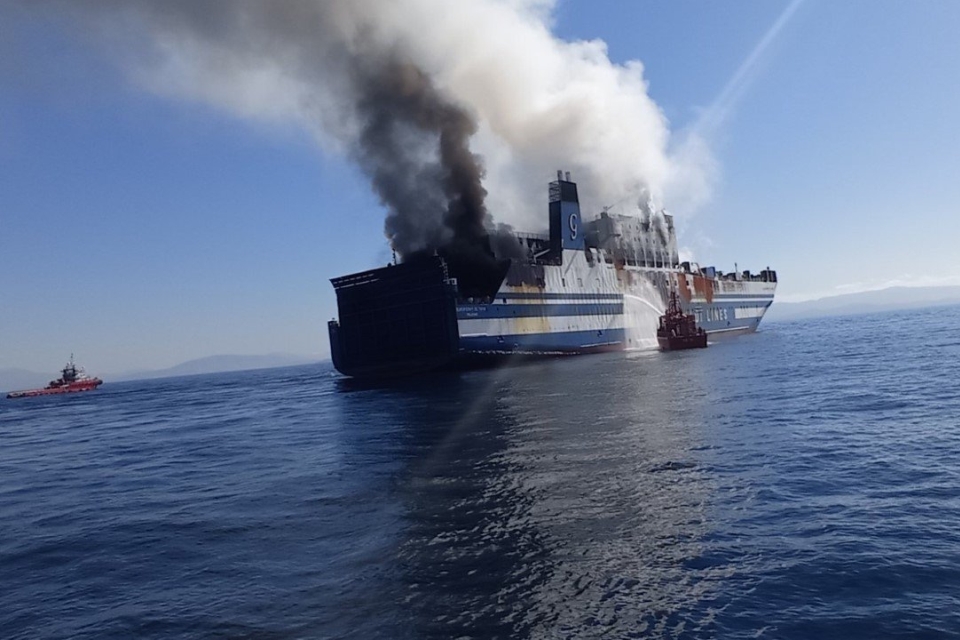 Grimaldi Group has reported that the fire on board its RoRo vessel Euroferry Olympia is under control, while cooling activities continue. On Friday afternoon, two passengers that had been stuck on the ferry were rescued, with a third rescued on Sunday. Ten others are still missing and one person was found dead.

The Euroferry Olympia had left Igoumenitsa in Greece and was about 10 miles north of the island of Corfu while heading for Brindisi, Italy, when a fire broke out on a car deck on Friday morning (18 February) at around 4 am. The cause of the fire is still unknown. More than 270 people were rescued by the Greek Coast Guard and the Italian Guardia di Finanza.

According to Grimaldi Group, there are currently no fuel spills or other types of environmental damage. The company has appointed Smit Salvage for the rescue operations. Smit Salvage’s parent company Boskalis announced on Friday it would send a team of twelve experts to provide assistance.

The two passengers rescued on Friday were a Bulgarian citizen and an Afghan citizen. They were both evacuated and promptly transported to the hospital of Corfu for a medical check-up. The BBC reports a truck driver from Belarus was found alive on Sunday with firefighters also finding a body on the same day. Ten remain missing.

The Greek Coast Guard reports that three patrol boats, one firefighting vessel and five other vessels are with the RoRo ferry. Their last information was that the vessel was being towed to a safe anchorage northeast of Corfu.

Following a verbal order of the Corfu District Attorney, the captain and the two chief officers of the ship were arrested by the Corfu Port Authority and brought before the Prosecutor. They were released again after being interrogated. A preliminary examination has been ordered.

Grimaldi states the ferry last received a Port State Control visit on 16 February, which ended with a positive outcome.

The 33,588 GT, 183-metre-long Euroferry Olympia was built in 1995 and flies the Italian flag. It is deployed by the Grimaldi Group company Grimaldi Euromed S.p.A. on the daily Brindisi-Igoumenitsa maritime connection. It can carry seventy cars and 570 passengers.

Picture by the Greek Coast Guard.