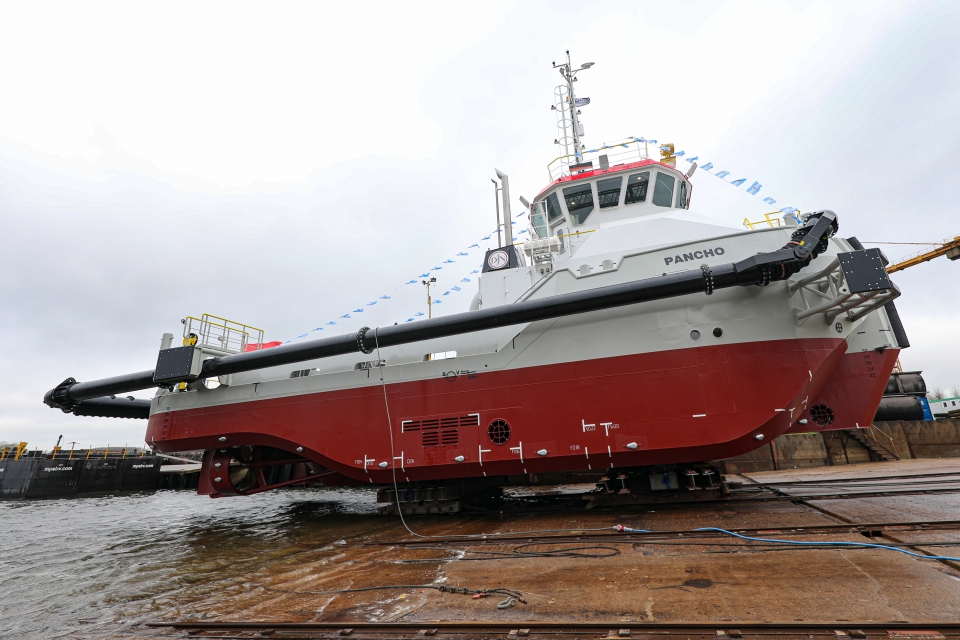 Jan De Nul Group’s new water injection dredger Pancho has been launched at the Neptune Marine shipyard near Dordrecht in the Netherlands. The design of this new build vessel is based on an existing vessel design from Neptune’s workboat portfolio.

Together with the engineering department of Neptune, Jan De Nul integrated its in-house built dredging equipment, including the dredge pump and dredge pipes, the winches, hydraulics and the necessary equipment for an adapted pipeline routing on the fore ship.

Jan Van de Velde, Head of the Newbuilding Department at Jan De Nul Group: ‘The experience with our existing fleet of water injection dredgers taught us that there was a need for a more compact vessel to reach the smaller corners in ports and rivers. However, despite its compact character, the Pancho has a depth range of more than 20 metres. Perfect for maintenance dredging. We are looking forward to the further completion of this new dredger together with the Neptune Marine Shipyard, with the intention of taking the Pancho into service in March 2022.’

The Pancho will be used mainly in the Argentine dredging market, hence the Spanish name. Pancho is Spanish for the first name “Frans”, which is the nickname of Jan Frans, the two-year old son of Pieter Jan De Nul and Sabrina Fontana Unzueta. With this, Jan De Nul continues the tradition of naming the first ships of a certain type of dredging vessel after its family members. The Pancho was christened by Ms Unzueta.

A water injection dredger is smaller than a trailing suction hopper dredger and can therefore be better deployed in ports and rivers where the work area is often smaller. In water injection dredging, water is injected under low pressure into the subsoil, causing the soil material to move.

This dredging technique is especially suitable for maintenance dredging in areas where sediments were recently deposited, or for moving fine sand over shorter distances.

Jan De Nul currently has five water injection dredging vessels in its fleet, including the Pancho and another sister vessel under construction at Neptune Marine in the Netherlands.