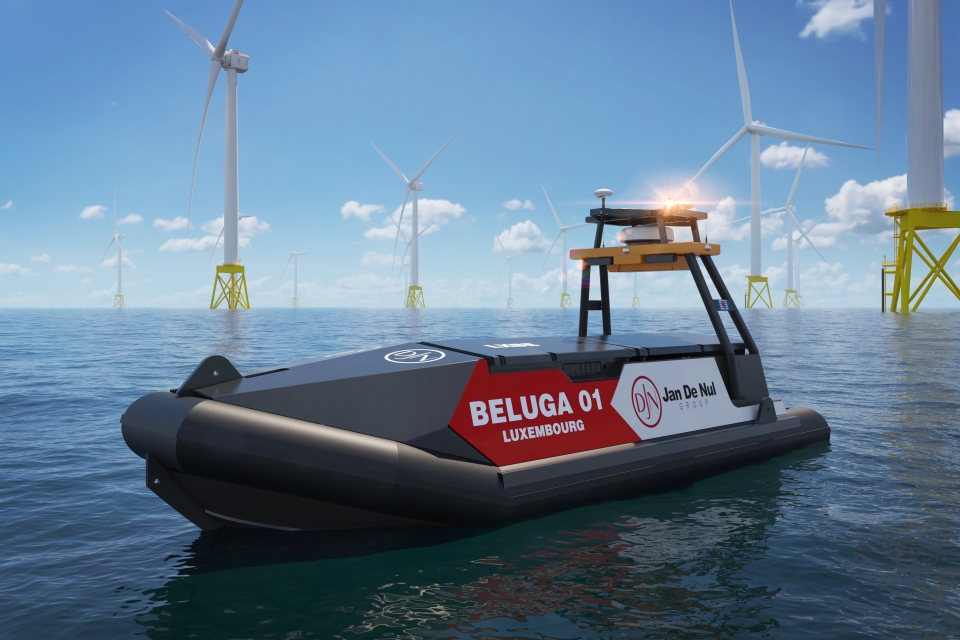 Jan De Nul Group has ordered Maritime Robotic’s hybrid Mariner Unmanned Surface Vehicle (USV) as the first step towards unmanned and autonomous offshore survey operations. Named Beluga 01, this vessel will sail under the Luxembourg flag and be deployed for worldwide hydrographical and environmental surveys on marine and offshore construction projects.

The Beluga 01 is said to be a user-friendly, cost-effective and low-risk platform for data acquisition at sea as an alternative or adjunct to larger manned vessels.

‘For several years, we have been studying different autonomous systems,’ says Mike Lycke, Survey Manager Offshore Projects at Jan De Nul Group. ‘Our primary focus has always been to build up our expertise on autonomy for maritime survey operations. The global circumstances in 2020 and a maturing USV market enabled us to take it to the next step and order a turnkey vessel for our marine and offshore projects.’

The Beluga 01 is equipped with a fully redundant hybrid propulsion system. The prime source of propulsion is a diesel engine that is mechanically coupled to the water jet. Alternatively, the vessel can be operated in full electrical mode. The additional electrical Torqeedo propulsion, installed parallel to the main propulsion, can manoeuvre the vessel in sensitive marine areas.

There is also a range extender module to top up the batteries which will operate longer than twelve hours. This system has lower emissions than the main engine, which could also be used as an alternator for the batteries.

Furthermore, the electrical propulsion acts as redundancy for the main engine in case of a failure, or vice versa.

The USV is named after the Beluga whale. The name is the result of an internal survey amongst Jan De Nul crew and staff, which has also brought forward the company’s smaller USV names, Curiosity and Calypso.

Main characteristics of the Beluga 01 (Mariner-class USV) are:

Use of USVs increasing

Jan De Nul is not the only dredging and offshore contractor to operate USVs. Van Oord has had one in operation since 2020 and ordered a second one in May 2021. The first vessel is mainly used in inland water, but the second vessel will also be deployed for near-shore operations.

In November, Fugro’s USV Blue Essence visited the Netherlands for the first time.

Picture: The seagoing Beluga 01 will improve safety during offshore operations.