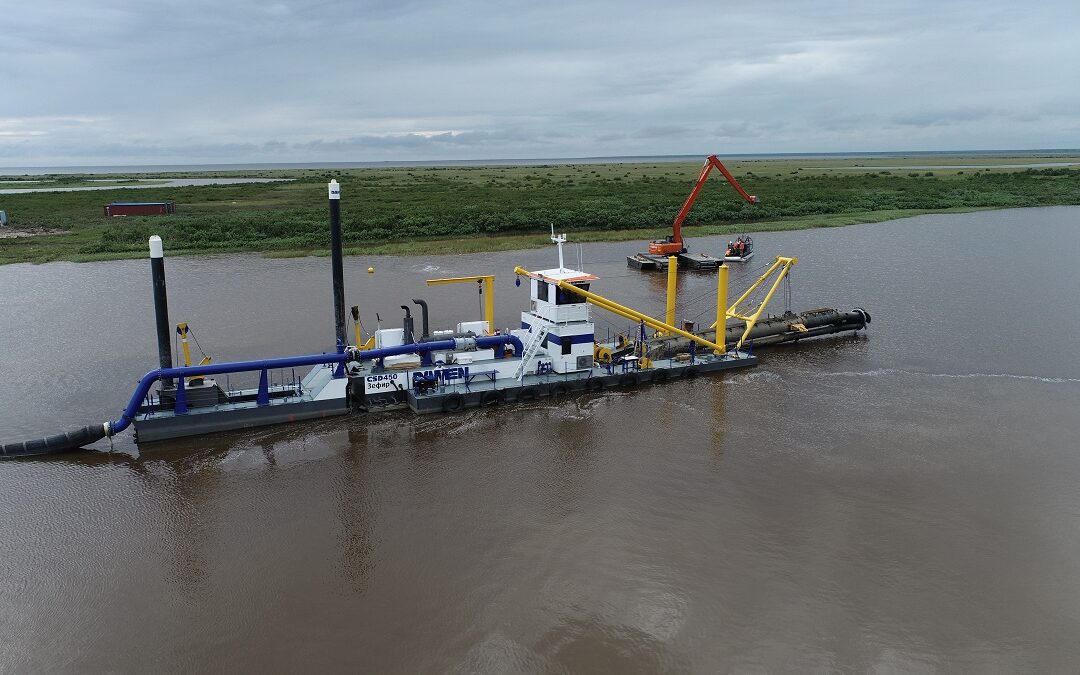 A customised Damen Cutter Suction Dredger 450 has been delivered to the Russian Arctic region on time, despite a very tight schedule and the extremely remote location. The vessel named Zephir was transported fully dismounted and assembled on site.

The new Cutter Suction Dredger (CSD) has to perform various capital dredging projects within the ice-free, short time window available. The contract for the Zephir was signed in December 2020. However, the standard stock dredger had to be adapted to the particular Russian circumstances in just three months. Due to the short spring and summer season in the far north, the delivery time was critical and had to take place before the ice started to return.

Additionally, as a further challenge, the shore assembly of the dredger had to be done whilst the ground was still frozen and the launch, on the other hand, had to be performed as soon as the ice had thawed.

The outfitting and upgrade of the CSD450 was carried out at the specialist Damen Dredging yard in the Netherlands. This included increasing the dredging depth to -14 m, plus classification and standard stock additions such as a deck crane, anchor booms, a spud carriage and an accommodation unit.

The Zephir was transported fully dismounted due to the complex and challenging journey it was about to take to the Gulf of Ob, which is located over 2000 km northeast of Moscow. First, the CSD had to travel on a truck to Antwerp before it was shipped to Saint Petersburg, and then it was transported by train to Salekhard. On the final leg of its journey, it was trucked over the frozen tundra to the assembly site.

Having arrived there in May, the dredger was assembled, although the ground was still frozen. The launch was successfully performed once the ice had cleared in early June.

The Damen CSD went straight to work and has since performed a number of capital dredging jobs in the region, including deepening small rivers and stretches of the Gulf of Ob. The dredger pumps some 3000 m3/h of mixture through its floating pipeline. Now, as winter has fallen in northern Russia, the dredger is currently on its winter stop until the ice melts again.