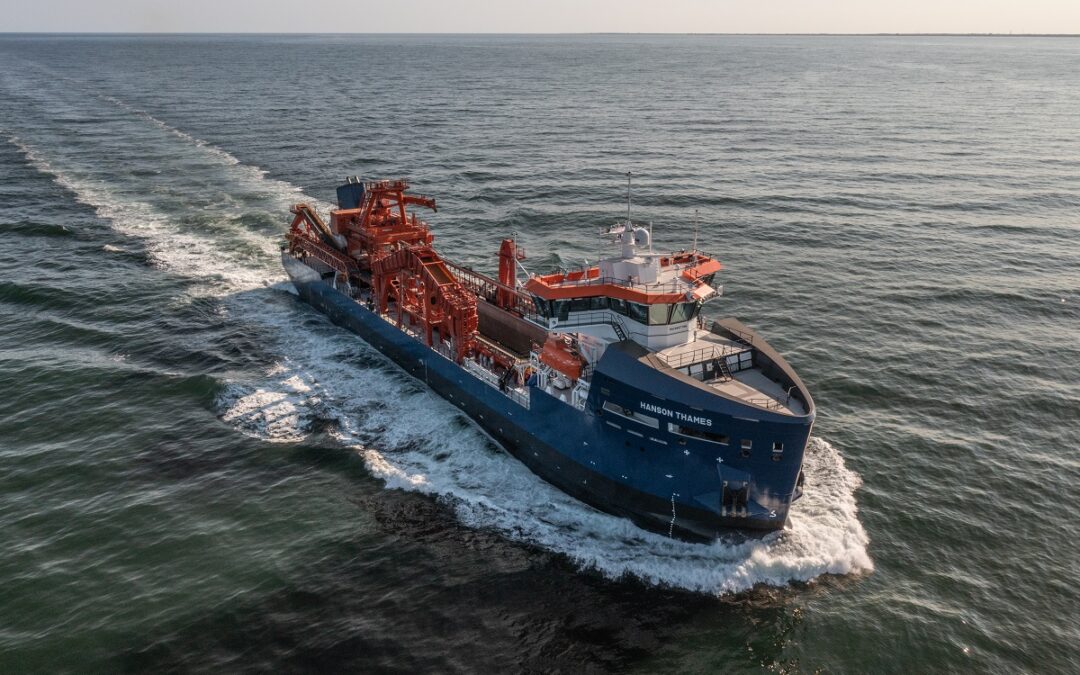 The second vessel of Damen’s new Marine Aggregate Dredger (MAD) 3500 class has completed its sea trials. As of January 2022, the Hanson Thames entered service with its owner, Hanson UK, a supplier of building materials to the UK market, replacing an obsolete vessel.

The design team at Damen sought input from experienced operators in the sector as well as from its own repair yards, which have been maintaining dredgers for many years, and its dredging mission equipment production subsidiary. As a result, while the new design is similar in size to its twentieth century equivalents, the MAD 3500 is a completely new class that can carry twenty per cent more product and reduces operational costs per tonne.

These feats are achieved not only by the latest propulsion systems delivering greater fuel economy, but also their ability to conduct operations while running on a single engine. It is also designed to operate 24/7 with just nine crew. At any one time, dredging can take place with only two personnel on the bridge plus an engineer on duty. Unloading the entire vessel can be achieved in just two to three hours and is fully automated.

With ease of maintenance designed into the vessel from the earliest stages, operability is maximised. This is achieved partly through the use of modular systems that allow faulty components to be swapped out for new ones while the defective unit is sent away for testing and repair. This in turn is supported and enhanced by the use of Damen’s Triton remote monitoring and analysis system that enables continuous optimisation and pre-emptive maintenance. This is achieved using ship-wide sensors to deliver operational data to both the bridge and managers onshore for real-time analysis.

The Hanson Thames began its build at Damen Shipyards Galati at the end of 2019 and, while being based on the original MAD 3500 design, it benefited from the experience already gained from an earlier build and had some adjustments to meet its own particular operational requirements.

Key technologies on board the MAD 3500 include the modular screening tower, which allows material brought up from the seabed to be sorted as it comes aboard rather than once it reaches land. This enables it to retain only the grades that are in demand while returning the rest to the seabed. This makes it yet more efficient and profitable.

Another is the application of the Damen Offshore Bow. This fully encloses the foredeck, protecting equipment and cargo as well as delivering excellent seakeeping. The mooring system is designed around flow lines to ensure safe and efficient mooring at all times, and the addition of telescopic spud poles enables the MAD 3500 to hold position without the use of lines or the need for constant adjustment.

The Hanson Thames was launched at Damen Galati Shipyard in September 2020.

To support the Hanson Thames and other Damen vessels, Damen has recently established a Service Hub in the nearby Port of Southampton to enable it to provide full, through-life support and to act as a repository of knowledge as well as critical components regarding these specialised vessels. With much of the existing North Sea fleet of aggregate dredgers due to be retired soon, and many of them based in the UK, the value of this resource is expected to grow over time.