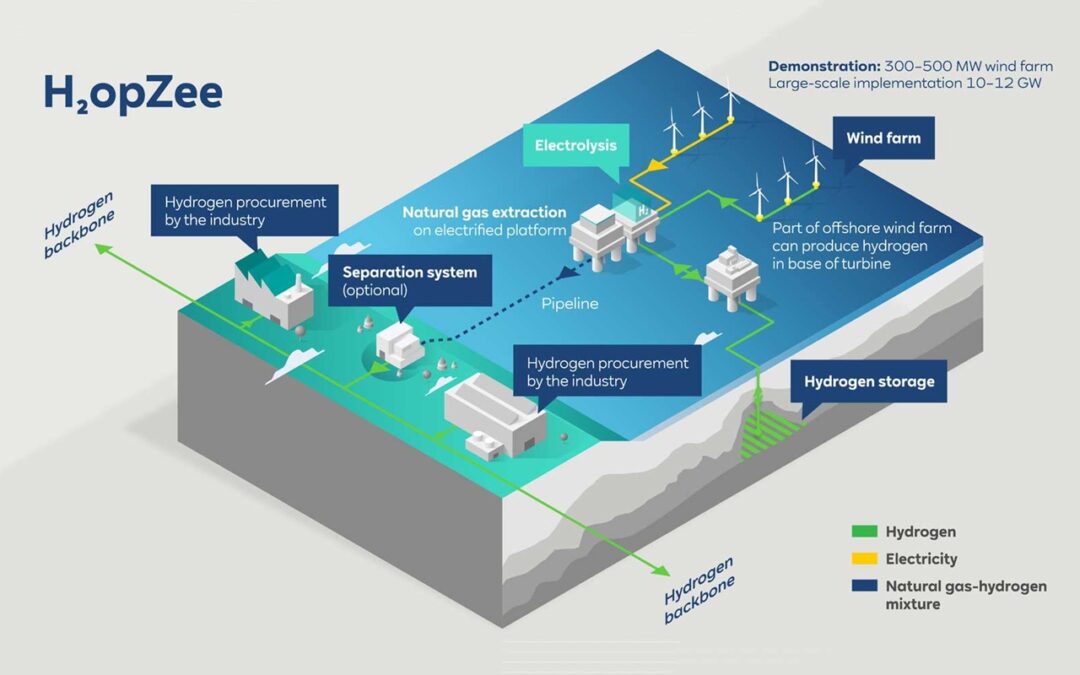 Neptune Energy and RWE have joined forces to develop the offshore green hydrogen project “H2opZee” (H2atSea) ahead of 2030. This demonstration project aims to build 300-500 megawatt (MW) electrolyser capacity in the North Sea to produce green hydrogen using offshore wind. The hydrogen will be transported to land through an existing pipeline.

The pipeline has a capacity of 10-12 gigawatts (GW), so is already suitable for the further roll-out of green hydrogen production to gigawatt scale in the North Sea. The intention is to begin the feasibility study in the second quarter of 2022. The project is an initiative of TKI Wind op Zee, an initiative supported by the Dutch government bringing people, knowledge and financing together to support the offshore energy transition.

H2opZee consists of two phases. In the first, a feasibility study will be carried out and an accessible knowledge platform will be set up. The objective is to start the roll-out of hydrogen at sea in the Netherlands. In the second phase, the project will be implemented. For this phase, a tender methodology has yet to be defined.

‘We see an important role for green hydrogen in future energy supply, and it can be produced here in the North Sea,’ says Neptune Energy’s Managing Director in the Netherlands, Lex de Groot. ‘The energy transition can be faster, cheaper and cleaner if we integrate existing gas infrastructure into new systems. This infrastructure is technically suitable, no new pipeline at sea is needed and no new landfall is required through the coastal area.’

De Groot adds: ‘With the PosHYdon pilot we are one of the leaders in this field of offshore energy system integration and reuse. The lessons learned from this project apply to H2opZee. The faster we can scale up green hydrogen at sea, the faster industries such as chemicals and steel production can become more sustainable. With H2opZee, the Netherlands is becoming a world leader in this area.’

Sven Utermöhlen, CEO Offshore Wind at RWE Renewables: ‘Hydrogen is a gamechanger in the decarbonisation of energy-intensive sectors and H2opZee is a world first of this kind and scale. With Neptune Energy at our side, we want to develop the H2opZee project to demonstrate how offshore wind can be an ideal partner for the production of green hydrogen at scale and to explore the best way in terms of system integration.’

H2opZee comprises 300-500 MW additional green hydrogen offshore capacity combined with an existing pipeline that can facilitate 10-12 GW in the future, and is a world first of this kind and scale. The knowledge and expertise gained will strengthen the competitive position of Dutch industry, help to establish the value chain of offshore wind and green hydrogen production in the Netherlands, and deliver technology and knowledge that can be exported worldwide.

H2opZee is one of the 37 proposals for the second round of the National Growth Fund. Consortium partners RWE and Neptune Energy have worked together on the initiative from the very beginning. While the core consortium of H2opZee has been kept small and decisive, knowledge will be shared with the industry and almost forty relevant organisations have already signaled their support.

The Dutch have been strong in developing offshore technology for over fifty years and also want the lead the way in the transition to offshore renewables. In SWZ|Maritime’s upcoming February offshore special, to be published at the end of next week, our editors investigate the next generation offshore installation vessels, new offshore installation methods, the global energy situation, research into the development of future floating infrastructure and much more.

Don’t miss this offshore special and become a subscriber today.