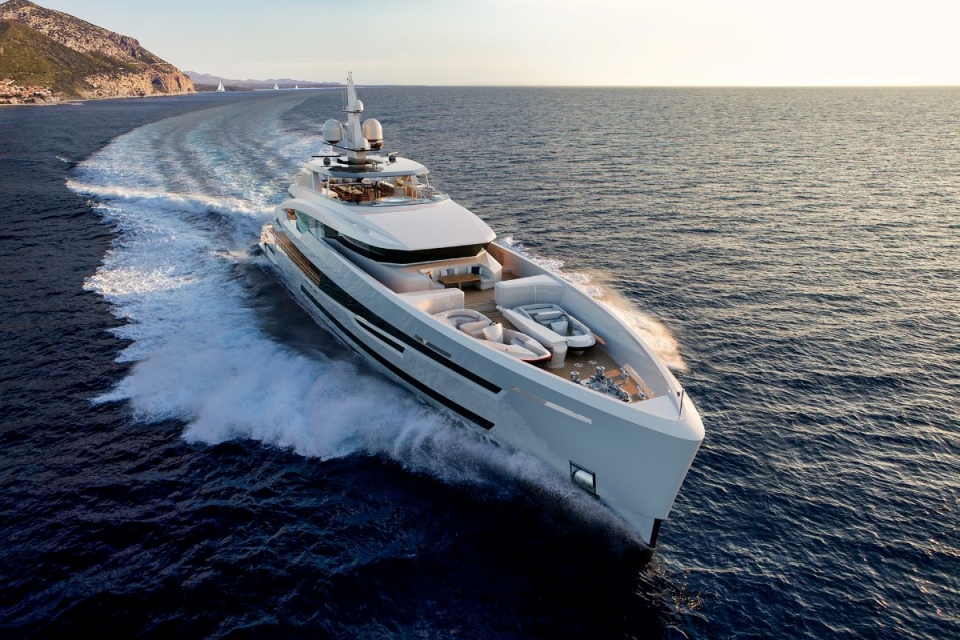 Heesen Yachts has officially begun construction of YN 20457, Project Akira, at the Oss shipyard on February 9. The 57-metre yacht is the first in a new class of high-speed aluminium yachts. Delivery is scheduled for spring 2024.

At 57 metres, with an enclosed volume of approximately 780 GT, it sports a lightweight ultra-efficient Fast Displacement Hull Form (FDHF) hull that will give her a top speed of 22 knots with two IMO III-compliant MTU 16V 4000 M65L engines.

The all-aluminium hull is the latest refinement of the patented FDHF, devised by Dutch hydrodynamicists Van Oossanen and further engineered by Heesen’s naval architects. Thanks to the low-drag underwater body, Akira is fast yet highly economical, needing less power and using up to half the fuel of a conventional steel displacement yacht of the same size. Thanks to its shallow draught of just 2.3 metres, it is also a go-anywhere yacht.

For this new breed of yacht, Heesen appointed long-term partner Frank Laupman of Omega Architects for the exterior design. The yacht’s lines are characterised by a shapely profile, a gently raked bow, and bold fashion plates. A standout feature is the distinctive scalloped transom to increase the size of the large fixed swim platform, which will make it instantly identifiable in any marina.

‘We see great potential for this new model,’ says Arthur Brouwer, Heesen’s CEO. ‘Akira is the only 57-metre, all-aluminium fast motor yacht with a Northern European pedigree available for delivery in spring 2024. This design presents a perfect counterpoint to our successful 55-metre Steel Class, and is ideal for those clients who seek that elusive combination of speed, efficiency and volume.’

When it came to Akira’s 400 m2 of interior space, Heesen’s engineering department worked with Harrison Eidsgaard to develop the general arrangement – a decision that led to a step-change in the way the design was approached.

‘Introducing us to the project so early meant that the mechanical parts of the ship were considered in tandem with the interior,’ says Ben Harrison. ‘So key areas have been given the space they need, enhancing the flow of the yacht. The modern onboard lifestyle is all about making the most of the scenery outside.’

Twelve guests are accommodated in six suites. The 63 m2 owner’s stateroom occupies the main deck forward and comprises a study, the bedroom, and a full-beam bathroom with bathtub and shower stall. Four double suites are found on the lower deck, while the VIP cabin is up on the bridge deck. All decks are served by a glass elevator.

Outdoor spaces are carefully conceived to offer the ultimate experience of life at sea. Large windows create connectivity between indoors and out.

Watch a video walkthrough with Ben Harrison and Ewa Eidshaard below.