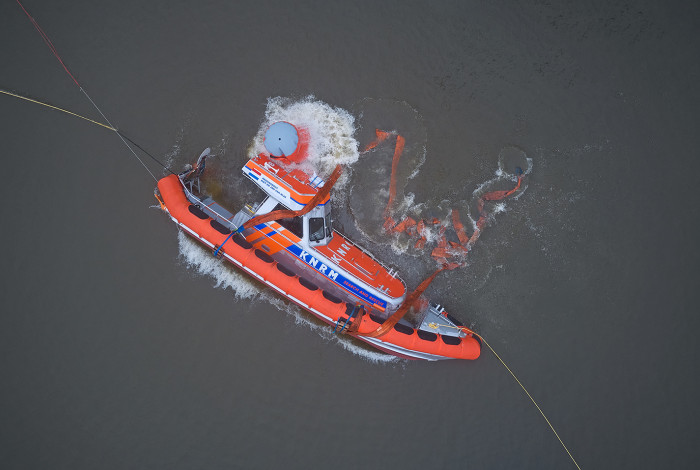 The first new rescue boat of the Royal Netherlands Sea Rescue Institution (KNRM) has been subjected to a capsize trial. The KNRM and shipyard Dok en Scheepsbouw Woudsend performed the trial together in the port of Lemmer to test the boat’s self-righting capabilities.

The trial was conducted on Tuesday 18 January. The Van Wijk class is a self-righting rescue boat, which means that if the boat capsizes, it will automatically return to an upright position in the water. The trial is to determine if the tilting system that helps to turn the boat back up works well.

This system consists of a capsize bag, which is located on the boat and which fills with air very quickly after activation. This causes the boat to self-right automatically. This is an important requirement for KNRM lifeboats that often have to bring rescuers and saved people safely to shore in very turbulent conditions.

During the capsize test, the boat is turned upside down by means of a crane in order to simulate capsizing. During the simulation, no one is on board.

The capsize test showed that the Van Wijk lifeboat returned to its normal position in less than fifteen seconds after the self-righting system was activated. This shows that the system is functioning optimally.

The new Van Wijk class concerns a series of eight rescue boats, of which the first will be used by the KNRM in the course of 2022. This series of boats is named after a testator who left money specifically for the construction of a type of lifeboat. The Van Wijk is a further development of the existing 11-metre Valentine class.

This week, the KNRM also ordered twelve new 7.5-metre rigid-hulled inflatable boats (RHIBs) with Palfinger. Both newbuild projects are part of the broader plan to replace the entire KNRM rescue fleet of 75 boats in the next fifteen years. The current rescue boats of the KNRM were built between 1991 and 2016 and the oldest boats are due for replacement. The replacement of the entire fleet will cost approximately EUR 83 million.