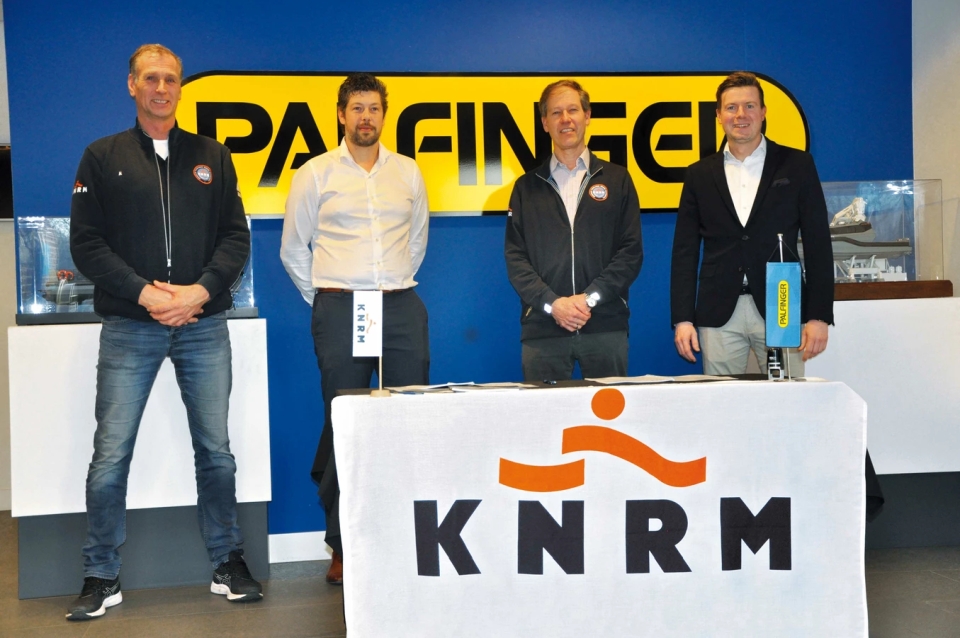 Palfinger will develop a new series of rigid-hulled inflatable boats (RHIBs) for the Royal Netherlands Sea Rescue Institution (KNRM). The twelve RHIBS will be built at Palfinger’s production facility in Harderwijk, the Netherlands, with the first to be delivered at the end of this year.

The KNRM helps people in distress at sea, 24 hours a day. Around 1400 volunteers are on duty over 2000 times a year. It has 75 boats available for the missions. The twelve custom-built boats will assist the KNRM during future rescue operations. The official signing of the contract took place on 20 January in Harderwijk.

Working closely together with the Dutch rescue organisation, Palfinger is developing a 7.5-metre-long, twin outboard aluminum RHIB. This is a completely new development. The boat will have room for three crew members and twelve rescued people. A robust hull construction and a wave-breaking bow design provide the necessary stability – even in the roughest sea conditions. Two Yamaha VMAX 115 hp 4-stroke engines give the lifeboat a speed of at least 32 knots.

‘Besides quality and safety, we will pay special attention in the development phase to improving ergonomics in order to minimise physical strain fatigue of the KNRM rescuers during use in these rough conditions,’ says Arnoud Straakenbroek, sales director govermental & professional boats and davits at Palfinger.

Jacob Tas, general director of the KNRM adds: ‘For the KNRM, reliability, safety and quality of our equipment is very important because our rescuers voluntarily risk their lives for others. We are confident that with the 7.5-metre RHIB, we offer our rescuers the best boat in this class.’

The first RHIB will be named Chaterina D. This name was invented by the donator of this first boat. Traditionally, the name of the first boat in a boat class is also the class name of the corresponding series.

Once the first RHIB is delivered from the shipyard in Harderwijk at the end of 2022, the KNRM will intensively test the boat against the defined quality criteria. If the boat meets all expectations and is approved by the KNRM, Palfinger will start building the remaining eleven boats. The last RHIB will be delivered in 2028.

Construction of the new 7.5-metre RHIBS is part of the broader plan to replace the entire KNRM rescue fleet of 75 boats in the next fifteen years. The current rescue boats of the KNRM were built between 1991 and 2016 and the oldest boats are due for replacement. The replacement of the entire fleet will cost approximately EUR 83 million.

Picture (from left to right): On January 20, the contract was signed by Gert-Jan Wijker (Head of Technical Service at KNRM), Arnoud Straakenbroek (Sales Director Governmental and Professional Boats and Davits at Palfinger), Jacob Tas (General Director of the KNRM) and Alexander Schouten (Global Sales Director Boats and Davits at Palfinger) at the Palfinger office in Harderwijk, the Netherlands.