IJmuiden sea lock to be completed this summer 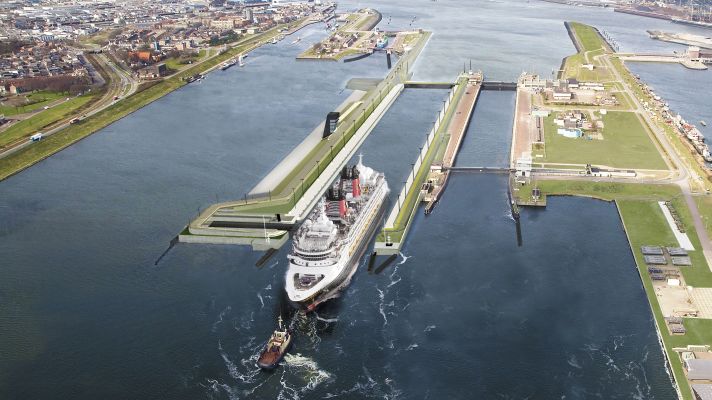 The construction of the sea lock at IJmuiden, the Netherlands, will be completed this summer. The lock will then be delivered to Rijkswaterstaat and a period of testing will begin. The lock is to be taken into service early next year. Construction started in 2016.

In the coming period the lock builders, construction companies BAM and VolkerWessels, will be busy testing all the systems. If the lock works properly, it will be delivered to Rijkswaterstaat. Rijkswaterstaat is part of the Dutch Ministry of Infrastructure and Water Management and responsible for the design, construction, management and maintenance of the main infrastructure facilities in the Netherlands.

Delivery will be followed by a period of testing for the people who will have to work with the lock, such as lockkeepers, pilots and boatmen. The latter are the people who moor the ships in the lock. The tests, planned for autumn, will also involve sea-going vessels.

Originally, the new lock should have been commissioned by the end of 2019. However, construction was delayed due to a construction error. The repair of this error cost BAM and VolkerWessels hundreds of millions of euros.

The new lock, which was named “Zeesluis IJmuiden” (Sea lock IJmuiden) after a competition, will be the largest in the world at 500 metres long. The lock will replace the current Noordersluis lock, which was built in 1929 and will reach the end of its technical lifespan in 2029. Moreover, this lock has become too small for some of the current ocean-going vessels.