What the Damen-built icebreaker Nuyina is up to in Antarctica 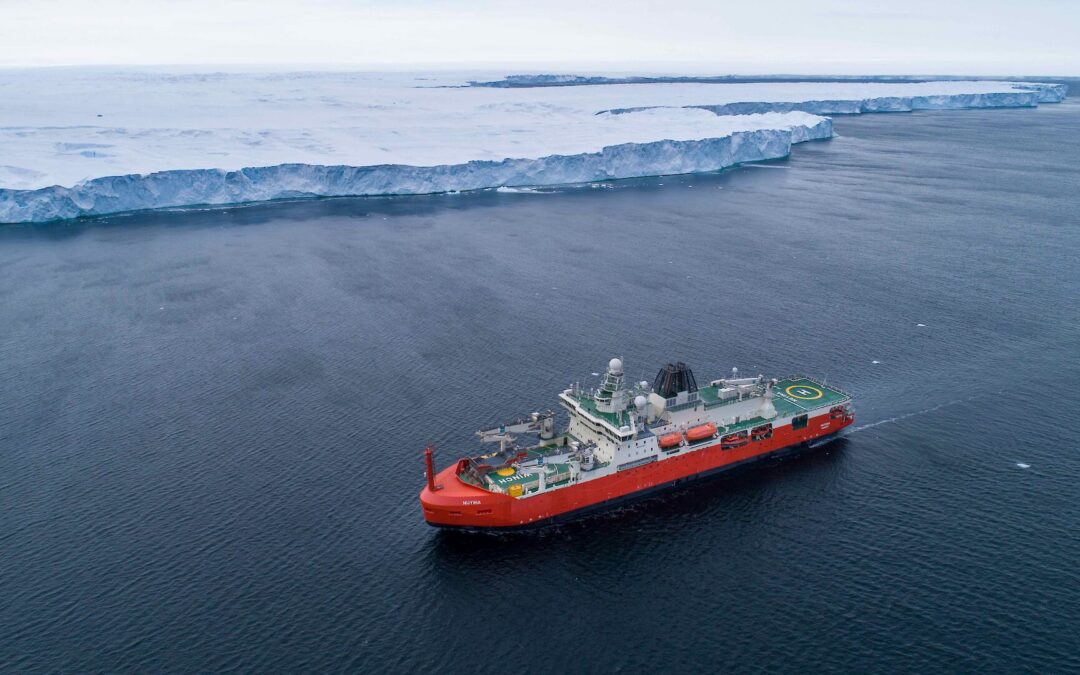 Australia’s new icebreaking research vessel RSV Nuyina, built by Damen Shipyards, has almost completed its first five-week voyage to Antarctica. In addition to refuelling a research station and transporting equipment, the ship caught its first krill, tested the moonpool and discovered an underwater mountain and deep glacial canyon with its multibeam echosounder.

Damen delivered the Nuyina to the Australian Antarctic Division (AAD) in August. The ship then sailed to its home port Hobart, Tasmania, where it arrived on 16 October. Since then, the ship was preparing for its first five-week voyage for which it departed on 23 December. The ship was supposed to depart a week earlier, but an issue with the ship’s alarm and monitoring system software resulted in a week’s delay.

The ship left Hobart with 67 expeditioners and crew on board to refuel Casey research station and transport helicopters to Davis station. In addition, the crew would undertake marine science commissioning including tests of the acoustic instruments mounted on the hull and drop keels, and deploying the CTD (conductivity, temperature, depth) sampler.

The CTD is the workhorse of oceanography research, measuring different water properties at various depths of the Southern Ocean. The ship’s “wet well”, a unique system to collect krill and fragile marine organisms from water piped directly into the ship from inlets in hull, was also tested.

On 4 January, the Australian Antarctic Program reported having caught its first krill on board the Nuyina with its “wet well”. The wet well is a watertight room deep inside the ship connected to inlets in the hull that allow water to gravity-feed into the room and across a filter table at about 2000 litres per minute.

The filter table is still in a prototype format for testing on Nuyina’s first voyage south, but future models will have a viewing chamber to allow the operator to remove fragile organisms like salps, using a hand net, before they may be damaged on the filter table.

More than 100 specimens of the predatory krill species Thysanoessa macrura were caught as the ship approached Antarctica at 59°S. Growing up to 30 millimetres in size, Thysanoessa are about half the size of Antarctic krill, Euphausia superba, which occur closer to the continent.

According to originator of the wet well concept, Rob King, it was the first test of the wet well in Antarctic waters. ‘It demonstrates that we can catch krill without slowing or stopping the ship, which means, weather permitting, we could potentially catch krill 24/7. The work we do on this voyage will help us determine the best conditions under which to catch krill and other species in the wet well, such as the speed of the ship, the flow rate of water and the mesh size of the filter table.’

In the past, krill have been caught using a trawl net with a small “cod end” – a tube that provided some protection for krill from being damaged by the net and any excess catch. However, this method was never ideal.

The captured krill and other animals are now living in a specially designed containerised aquarium where they will be monitored for their condition and survival. The aquarium can maintain the water temperature in which the animals were caught, until they are used on board or transferred to the land-based aquarium at the Australian Antarctic Division.

The specimens will contribute to deepening scientists’ understanding of Antarctic krill and their critical role in the ecosystem, which will strengthen conservation efforts and help ensure Southern Ocean krill fisheries are sustainably managed.

Antarctic icebreaker RSV Nuyina has a hidden doorway to the ocean that enables deep sea science, even when the ship is surrounded by ice. The moon pool is a 13-metre vertical shaft, four metres square, that runs through the ship’s hull to the ocean. When its top and bottom hatches are opened, the moon pool allows the deployment of oceanographic equipment such as CTDs, nets, and robotic vehicles, within the relative comfort and protection of the ship.

‘Vessels have had moon pools for many years. However this is a first for the Australian Antarctic Program,’ explained Michael Santarossa, Technical Services Manager at the Australian Antarctic Division. ‘Traditionally we’ve deployed CTDs through a side door, but when we’re surrounded by sea ice that’s not possible, so the moon pool is an important addition to our research capability on this new icebreaker.’

For the first ever deployment of a CTD through Nuyina’s moon pool to the seafloor, 2600 metres below, acousticians, technicians and engineers were on hand to monitor the operation and ensure the instrument’s safe return. The goal of the exercise was to collect Antarctic bottom water with the CTD – a rosette of water sampling bottles in a steel frame – close to the bottom without hitting it.

To ensure the CTD didn’t hit the bottom, acousticians used the ship’s multibeam echosounders to build a map of the seafloor beneath the ship and determine its depth. A pair of altimeters on the CTD also provided distance to the sea floor as the rosette descended, while a pressure sensor on the instrument provided another measure of depth.

While not yet implemented, the winch cables used to lower the CTD contain optical fibres which, in the future, will allow scientists to attach high definition cameras to the CTD to visualise the sea floor. This will not only reduce the chances of instruments hitting the seafloor, but allow scientists to see the seafloor habitat and have visual control of autonomous vehicles and other equipment.

For now though, lowering the CTD to five metres above the seafloor at a depth of 2600 metres and retrieving it without incident, is success.

Using Nuyina’s hull-mounted multibeam echosounder, the crew has mapped both the summit of an underwater mountain and a deep glacial canyon. At the end of December, the research vessel mapped a 2500 metres high, 2900 metres wide and 4500 metres long seamount. While an earlier voyage had skimmed one side of the seamount, no detailed mapping at its summit had ever been done.

The mount is located about 50 degrees South, on the edge of the “Furious Fifties” (50°S to 60°S). As Nuyina’s passage to Davis research station took the ship directly over the seamount, the on board acoustics team took the opportunity to switch on the ship’s hull-mounted multibeam echosounder, to find out what lay beneath.

Senior Acoustics Officer, Floyd Howard, said the echosounder ‘sees’ seafloor features by emitting pings of sound in a fan-like pattern beneath the ship. When the sound hits an object or the seafloor, it bounces back towards the ship, allowing scientists to build a picture of the seafloor. As the ship cruised at 8 knots over the seamount, its surface structure and height were gradually revealed, ping by colourful ping, with different colours representing different depths.

The highest point of the seamount was about 500 metres below the ocean surface. The team has informally named the feature “Ridgy-Didge Seamount” until an official name can be bestowed upon it.

In January, the Nuyina crew made a second discovery. They managed to map a deep canyon at the front of the Vanderford Glacier in East Antarctica for the first time. The previously unknown canyon, more than 2200 metres deep, 2000 metres wide and at least 55 kilometres long, was discovered after the ship departed Casey research station, following its refuelling operation.

As the ship navigated Vincennes Bay in front of the glacier, acousticians Jill Brouwer, Alison Herbert and Floyd Howard switched on the ship’s EM122 multibeam echosounder.

‘Although we’ve been visiting this region for decades on the Aurora Australis, we haven’t had the capability to do this sort of detailed mapping before,’ said Howard. ‘As a result, current navigational charts of this area are based on fairly limited surveys. Our work has shown that the seafloor is deeper and more complex than we thought.’

Voyage leader Lloyd Symons: ‘It will be really interesting to see how we can use Nuyina’s acoustic capabilities to improve our understanding of the seafloor bathymetry around our other stations in the future, particularly the approach to Mawson, which has a deep, narrow channel surrounded by pinnacles of rock.’

Support from other vessels

This summer, RSV Nuyina is supported by two other chartered vessels in Antarctica to ensure all the commissioning work required can be undertaken. Together, they take care of the biggest annual station resupplies ever undertaken by the Australian Antarctic Program.

The Happy Dragon is a 157-metre Dutch-flagged ice-strengthened heavy cargo vessel owned by BigLift Shipping (part of the Spliethoff Group). It helps to resupply Casey and Davis research stations this summer. The ship brought around 1200 tonnes of supplies and equipment for resupply to Casey in December, and delivered the new mobile inland station for the Million Year Ice Core project.