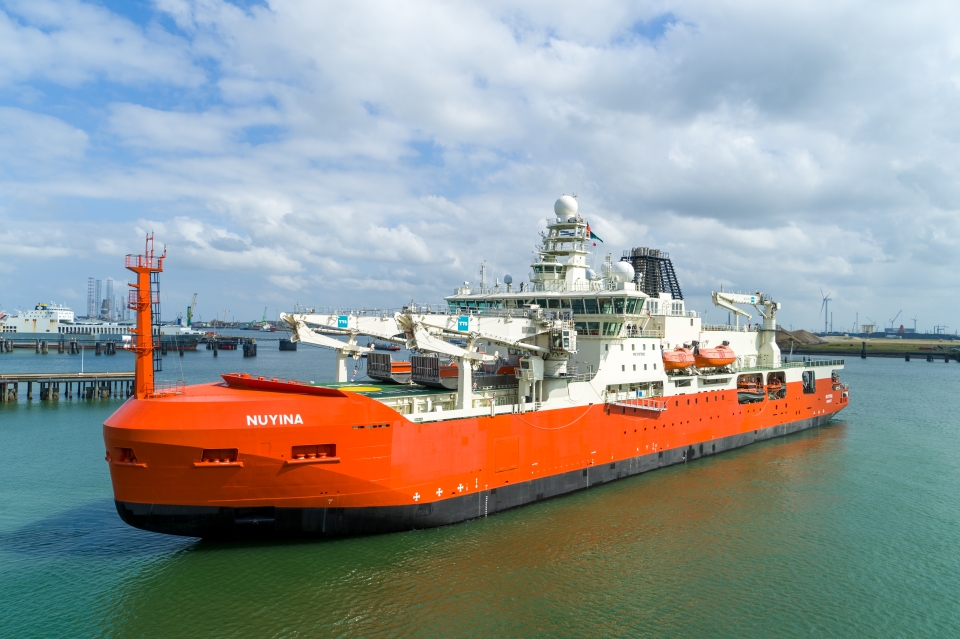 The new Antarctic Supply Research Vessel (ASRV) Nuyina, built by Damen Shipyards, has set sail from Vlissingen for its seven-week homeward voyage to Hobart, Tasmania. With the official handover to the Australian authorities, this ship, with a length of 160 metres and a cargo capacity of 24,000 tonnes, is now the most advanced arctic research vessel in the world.

The design and construction of the vessel was a multinational effort involving the Australian Antarctic Division, the vessel operator Serco, Danish designers Knud E Hansen, Damen’s engineering and detail design teams and the construction team at Damen Shipyards Galati in Romania. Around 120 Dutch companies from the entire supply chain of Dutch shipbuilding, led by Damen, were involved in the project.

Also read: Damen: Antarctic research vessel Nuyina is the most complex ship we ever built (extensive description of the ship as well as pictures taken on board)

‘The Netherlands’ maritime supply chain is one of the best in the world. This is partly due to the activities and innovative outlook of the Ministry of Defence and the Royal Netherlands Navy,’ says Roland Briene, commercial director at Damen Naval. ‘As an important “launching customer”, Defence plays a vital role in creating and maintaining the top quality within the self-creating Dutch naval construction sector. Damen is proud to be the prime contractor for many of their projects. It is these types of “launching customer” projects that enable us and Dutch suppliers to also design, build and deliver these complex vessels to a government on time (with a delay due to the COVID pandemic) within budget.’

A range of Australian companies have also played an important role in the construction of the ASRV Nuyina, such as Taylor Bros from Tasmania, which supplied two powerful Antarctic landing ships.

‘We are very proud that the Australian government chose to work with Damen for such a complex project,’ continues Roland Briene. ‘This is based not only on our long experience of building complex naval vessels, but also on our track record of working with Australian agencies and companies. Over the past twenty years, we have delivered more than 75 ships to the country, including three advanced support vessels for the Royal Australian Navy.’

In addition to the many innovative systems that the ASRV Nuyina has in place to ensure that the impact on the environment is virtually zero, the ship has climate-controlled spaces that can accommodate up to 32 crew members, 116 special personnel and a doctor for a period of up to ninety days. It includes single and double cabins with private bathrooms, a galley, dining room, lounges, theatre, fitness centre, yoga and medical rooms. The research facilities include 500m² of scientific (dry and wet) laboratories and offices. The ship has a range of 16,000 miles at a speed of 12 knots, and can break 1.65 metres of ice at a speed of 3 knots.

‘It is a memorable occasion,’ adds Gerry O’Doherty, captain of the ASRV Nuyina. ‘The ship was designed and built for the Australian Antarctic Program and it’s really special. This departure is day one of a thirty or possibly forty-year life span! We are going to do as much as we can with the ship. Everyone involved in this project can be proud of their contribution to the development of this ship, which has set a new world standard in polar research.’

Sussan Ley, Australian Minister of Environment, said of the vessel: ‘The SRV Nuyina will be the most advanced research platform in the Southern Ocean. A $1.9 billion commitment to our Antarctic ambition, to our pioneering Antarctic history and to Australia’s indigenous heritage.’

‘Nuyina is a Tasmanian Aboriginal word for southern light, when the ship arrives in Hobart later this year and comes under full Australian command, it will shine a light on the importance of Australian Antarctic science in monitoring and protecting our changing environment.’