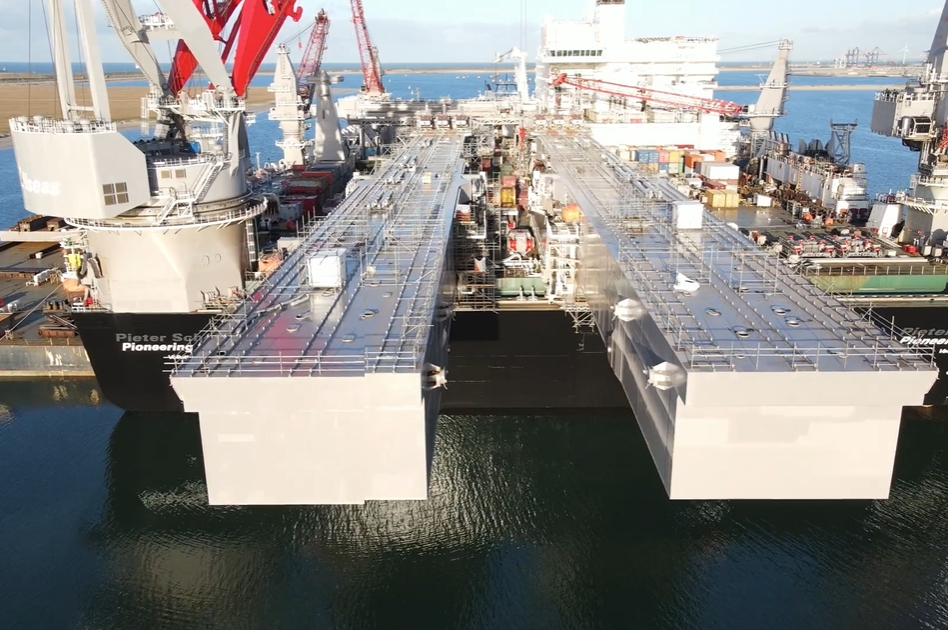 Allseas is preparing load tests for the Pioneering Spirit’s revolutionary jacket lift system. This marks the final weeks of the installation phase. Before this, 11,000 tonnes of high-density ballast has been mixed and pumped into the two main beams and two steel ballast frames, a 24-hour operation that took a week to complete.

The ballast is required to help upend the massive 170-metre beams. Watch a short fly-over of the jacket lift system beams in the video below.

In addition, 100 km of electrical cables have been thread through the beams and upend system, connecting the many different drives, winches, pumps and push pull skids to power-up and control the entire system. A further twenty four-kilometre steel wire ropes have been reeved through the main hoist blocks and derrick hoist. Fixed and adjustable grillages, which will distribute force along the beams during jacket lift operations, were fitted in parallel.

Now preparations are ongoing to upend the beams, a challenging operation requiring the upend system, derrick hoist and water ballast systems to work simultaneously for the first time. Allseas has made a documentary consisting of multiple episodes on building the jacket lift system. The first two are available in the link below.

The picture at the top is a still from the video above (by Allseas).